First i want to thank you all for this amazing community. After playing 7 chars taken from a guide i decide to make one for myself. It took me so long because my playing time is limited. And please give me some feedback and be a little bit patient with a first time ‘builder’. 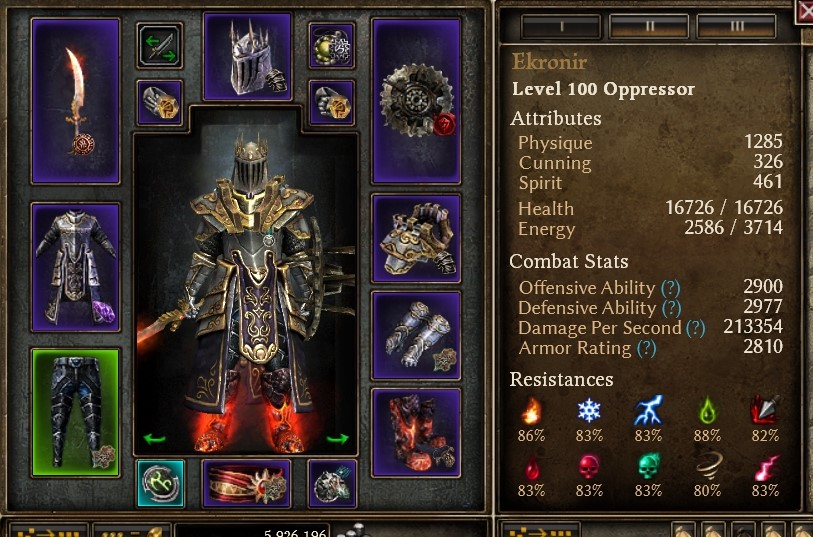 The idea comes from my love to the old D2 Barb and the ingame Quest Item Blazeheart
So i wanted to start an Oppressor, that is still my only FG character.

It took me some time to refine the build and i am unexperienced playing Rifts, heck, even in crucible it was my very first time to finish the last 170 wave (even i had in the past 2 chars that could clear it). The idea was to stack resistance and DA debuffs on the enemies to increase the damage.

I am pretty sure that a more experience player would do crucible without the banner. I have made whis build after succesfully clear it for the first time, so improvement can happen. 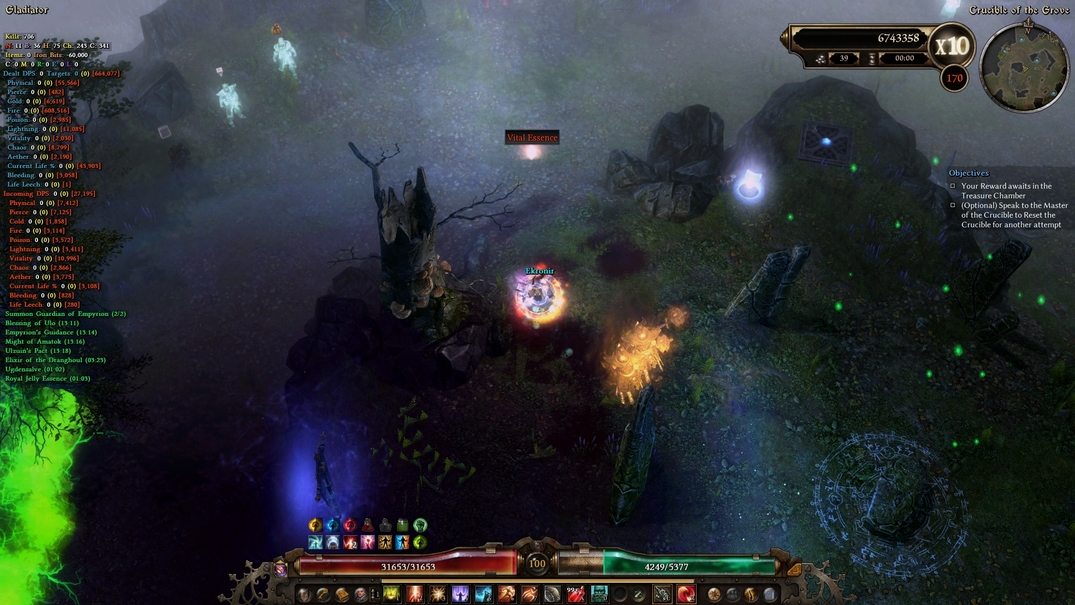 After using the ‘grimtools checklist’ i also discover i had missing 2 skillpoints, shame on me.

So here is the most successful iteration of this build with only one green:

It was a long and hard fight getting the right items because there is no designated set or way for using this build. Now i appreciate others build because i know how timeconsuming this is, but also how rewarding.

It is so satisfying to start spinning and then pull everything towards you with Judgment. These pesky ranged are now easily in range and all can be debuffed at once.

So after many attempts (like i said, i did not manage to clear 170 wave in 1.0.6 even with the mighty Cabalist.

Weapon: Even if Blazeheard is amazing, Alladrah’s Blade is insane for this build. While leveling you can take Bloodlord’s Vengeance from Thalonis
Ring: Open Hand of Mercy and closed Fist of vengeance give you the most. But honestly, i did not play all alternatives trough: Combustion Band, Entropic Coil, Lights Oath, Reign of Ice and Fire, Solael Stormfire Seal
Amulet: Conduit of divine Whispers with the Ascension Buff is crazy, but all of the +1 Oathkeeper are fair enough. Virtues is also good when you use with other Set Items
Helm: Okaloth Visage is my first pick, its an MI that can be farmed . Best for Crucible because of the attack speed. In the SR you will starv of Energy almost. Here is the Gaze of Emphyron better, obvious because the Manareg but aslo very good because the Ascension recharge reduction. The Other Helmets with +1 Skills are also good, look at my alternative Builds
Shield: Final Stop - the debuff is an amazing short time cooldown, but you need one of the hardly free bar slots. Stun duration decrease is also very good. It has no resistance, that’s why i did not find the perfect item. You can also use Virtue’s Defender, it is more tanky and supplies good bonuses combined with other set items. Other notable items: Mythical Dawnshard Bulwark,Mythical Turrion’s Reprisal,Occulant (carefull, you will loose some DPS because of the conversion to Acid),Stronghold Defender
Chest: Mythical Chestguard of Justice - stats combined with the set boni make it an amazing item. Alternatives: Mythical Divinesteel Hauberk,Virtue’s Armor (look 2nd setup), Vanquisher Armor, Mythical Dread Armor of Azragor, Elite Malmouth Aetherblaze Vestments (for beginners from vendor)
Shoulder: Shoulderguard of justice - amazing passive ability, this one gave me the edge to be more tanky in the last 10 crucible waves,Virtue’s Guard (2nd setup), Blightlord’s Mantle (see 3rd setup), Cyclone Mantle, Festerblaze Mantle,Mythical Flame Keeper’s Pauldrons
Pants: Grava’Thul this is the only green MI slot because even a decent one gives you so mutch stats, Mythical Hellforged Legplates, Solael-Sect Legguards (easy obtainable MI),Mythical Arcane Harmony Leggings, or even Mythical Chausses of Barbaros
Gloves: Handguard of justice, because again, great set boni and solid stats. Mythical Dawnshard Grip, Sandreaver Bracers, Mythical Turin’s Grip - most important to have attack speed on them
Boots: i did not find the one favorite, but beside the Earthshatter Treads i also enjoyed Wyrmscale Footguards. Other good items: Runeguard greaves,Foodpads of the Grey Magi or even Emberstone Treads
Relic: Absolution. However, Honor is not much worser and also fine
Belt: Mythical Crimson Lotus. Not the best. It is possible to improve this slot, alternatives: Mythical Infernal Knight’s Girdle,Mythical Reforged Chains of Oleron (not so much bonus beside the +1 to skills),Mythical Ulzuin’s Torment, Cord of Deception, Equilibrium Sash, Gladiator Distinction (100% Vitality to Physical), Hammerfall Gridle
Medal: i decide to go for the Sigil of the bear, even if it has no fire% and the proc is not applicable. But the other stats are fantastic. Alternatives: Mark of Divinity, Korvaak’s Brand Anyone Dualwield? :)), Blood Sigil of Ch’Thon or even a rare:Stonefather Mark,Volcanum, Sanctus Crest

If you replace items, look also for %damage skills or procs because they give you life back.

Theoretical it could work to go more physical orientated, invest more in the Necromancer tree and convert Vitality to physical (100% with the Gladiator Distinction belt)

:rolleyes: RR from RE:

Do you mean Foul Eruption only triggers when the enemie died from Ravenous Earth? Thats bad. On the other hand if these are 13 point for nothing then i can assign them to other skills.

I have to test it. Quick fought is to invest in Blight fiend (Unstable anomaly) with 12 Points in Rotting Fumes for -212 DA Debuff

Thanks for the Info Ricardi, i updated my build and will do further testing.
https://www.grimtools.com/calc/4NOnewKZ