Hi, I’m somewhat of a Veteran Grim Dawn player (over 1500 hours), but I’m not active on the forum and have never posted a build before. Note, that I play on Hardcore since FG released, so some of my build choices will be more defensive than what I would do in SC. However any kind of advice or input to improve the setup is more than welcome! 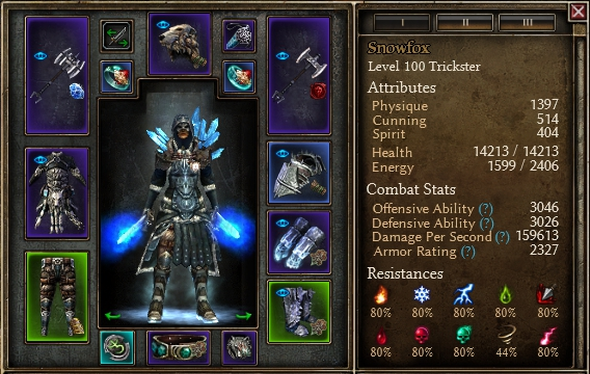 *Pneumatic Burst and Lethal Assault up

This is a fairly standard Dualwielding Cold Trickster, based on the Korba’s Fury set. It has a pretty high HP pool and overall balanced stats with 3k OA and 3k DA with buffs and without procs.
Attribute points are mostly in Physique but there is a lot of room to get more Cunning or Spirit, since the Hp pool is big, but I want to have a certain amount of DA, so this is what I ended up with.
The build has a rather low[ Armor of ~2300, but a solid 35% Physical Resistance, which combined is enough for most enemies in the game, more is possible with a few changes though.
80% Freeze Resistance and 80% Slow Resistance and 58% Trap Resistance.

Overall the build feels smooth and fun to play throughout the main campaign, can pretty much facetank every boss, most Nemesis and can -with the right setup- beat Ravager. Due to me playing on hardcore, I have not yet tried SR or Crucible, so I can’t say much about how well it would do there. Maybe someone here can try it out and let me know how far it can get.

The build is based on the whole Korba’s Fury set, most importantly Korba’s Hood, which adds cold damage and converts the lightning damage of savagery to cold, giving the build a solid AA replacer. it is not replaceable.
It is possible to replace both weapons for a Mythical Bane of the Winter King while keeping the chestpiece for the 2 piece bonus. this would turn the build into a 2H Savagery Trickster. I believe there is at least one like that on the forum, which is pretty strong, probably stronger than this one. (link to said build https://www.grimdawn.com/forums/showthread.php?t=73354)

I’m open for suggestions and different opinions on gearing. These are just the pieces that I have and chose for now. I’m planning on trying to get a well rolled Ugdenbog Chillstrife to replace one of the Korba axes with it, since the 4 piece set effect seems to be less impactful.

The Devotion part is the most flexible aspect of the build. I’m not fully sure which setup is the best for it, especially because I play on hardcore and can’t afford to die, so I prefer picking more defensive constellations.
The most important constellations to get (imo) are Murmur, Rhowan’s Crown, Ghoul, Viper and Solemn Watcher. I picked Ultos for the overall good nodes (chaos res and OA) and the proc. I’m aware that it does not stack with viper, but it’s still an overall solid devotion, however it’s fully optional and there are other set ups that I’m trying out. Same goes for Chariot.

The skills chosen for this build are fairly selfexplanatory. The build focusses on the Nightblade mastery. Dual blades and the WPS (especially Execution) are a must, dual blades provides physical resistance. Lethal Assault is a valuable damage proc that should be kept up at all time, however it should not be spammed on cooldown to maximize dps.
Ring of steel’s low cooldown (due to the 4 piece set bonus) makes it a very strong aoe option, but it does not scale too well (imo) so I kept it at its minimum.
For damage, I decided to push Night’s Chill as much as I could. more defensive set ups can prioritize Shadow Dance and Phantasmal Armor more.

On the Shaman side, the most important things to get are Savagery (max) and its mods to softcap. Winddevil provides more rr with Raging Tempest and Mogdrogen’s Pact is what gives the build the bulk of HP. Stormcaller’s Pact over Primal Bond unless one really needs the damage absorbtion (against Ravager for example). I chose to invest into Wendigo Totem for sustain against bosses. it scales nicely with larger hp pools, but is not necessary for the build.

Gameplay is really simple: Keep up Pneumatic burst and Lethal assault as well as the Winddevils up, then just use Savagery for single targets and Ring of Steel when aoe is needed (I use it for single targets as well, because I have blizzard bound to it). Place Wendigo if needed against harder bosses. Wendigo Totem + Pneumatic burst and the little adcth the build has will give a fair amount of sustain, I went for Tree of Life’s Healing Rain for ravager. Serenity, Prismatic Rage and Ghoulish Hunger are the build’s proc based line of defense as well as blade barrier as your OH SHIT button.

So yeah that’s the build. Sorry if anyone already posted it, I’m sure there is at least one (better) Korba build on the forum, but like I said, I’m not that active on here, so I don’t really know. I hope to hear some constructive feedback, so that the build can become stronger

I haven’t play Korba in FG,but I will share some quick insights.

-Iceskorn are better gloves you get flat damage,OA,crit and lethal assault.
-shoulder instead green,you can use Silver sentinel or even Ultos
-pants Tranquil mind
-Relic Niddala or Eye of the storm
-amulet strange component,why not annihilation?
-double Coldstone baybe:cool:
-wendigo is inferior to life steal

But man, I have played with this setup quite a bit and if you are patching stats/resists holes with green pants you have to use Mythical Silver Sentinel shoulders. They just give too much damage, I can’t see any way around them.

He probably uses serenity b/c he’s playing HC and that circuit breaker is important.

Chilling Grip of Hagarrad gives nice dmg b/c of the pierce conversion, though iceskorn talons look like a good alternative.

@OP: Shattered Realm is not too bad in HC, but DW builds in general can be challenging there. You’ll want more stun/freeze/slow resistance though.

Hey, thanks for the replies and suggestions so far!

I fixed the picture with the right Amulet Component (seal of annihilation) and swapped my green shoudlers for the silver sentinel ones. really great damage increase from the flat cold, +3 to lethal assaul (which caps it) and the 25% acid conversion! thanks for that guys

for the other points:

i think the best upgrade i could get now would be well rolled green boots, so i will try to get some.

Erm… full Korba is an RoS build, no? One-pointing RoS?

Also, Blood Pact gives you ~10% adcth to every third strike.

Cheers,Lumina!I gave some options,your build is good and tackling Ravager and HC for DW melee is an achievement.

Hey, small update to the build (edited in the main post under update1)

thanks for all the suggestions. thanks to that, i was able to optimize resistances and overall improve the performance of the build. i posted 2 versions, one that i use for general farming and one that uses Legwraps of the Tranquil Mind for SR (i still haven’t done any SR, but i plan to going up to 50 with this build)

@ya_ thanks for pointing out Blood Pact, i overlooked that completely and yes the set is made for Ring of Steel, but i dont really have the points to spare and when i tried to spec it higher, it didnt feel as impactful to me, so i rather keep it as a strong onepointer

@ya_ thanks for pointing out Blood Pact, i overlooked that completely and yes the set is made for Ring of Steel, but i dont really have the points to spare and when i tried to spec it higher, it didnt feel as impactful to me, so i rather keep it as a strong onepointer

Hmm… I haven’t looked at full Korba in years. It used to be good, I remember. But now that I look at the numbers - 73% weapon damage and 500 pierce for 15 points - doesn’t look like a great deal indeed…

Was it nerfed when I wasn’t looking?