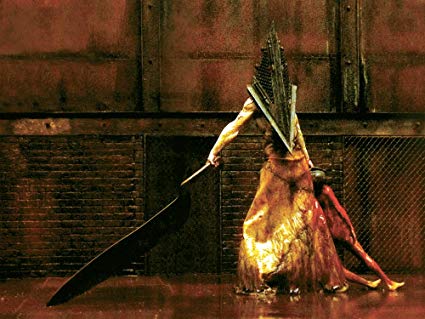 Hey guys! Time for a second build, one I’ve been working on for a while, and finally got it to come together here. While the Avenger Warder is certainly not anything new, I thought I would give my personal spin on it for Forgotten Gods.

This build can clear SR 75, but it takes a lot of kiting and luck. I’m not very good at it, so your mileage may vary. It can clear 65 without much issue unless you get the tiny room.

WARNING: Look out for Big Moose. This build has low freeze resist, so Moose can be a problem in small rooms. Kite away from the crystals.

I don’t play crucible. I don’t know how well it would fare there.

So the Avenger Warder is pretty simple. You run up to a bad guy, beat his face out through his ass, then move on to the next. Only a handful of active skills, letting Savagery do almost all the work while using Blitz to move around and War Cry and Devouring Swarm to lower resistances.

The build isn’t focused around bleed, but it has a good amount of it. You could change a few devotion points around to emphasize bleed a little more, but I really like Oleron and didn’t want to lose it. 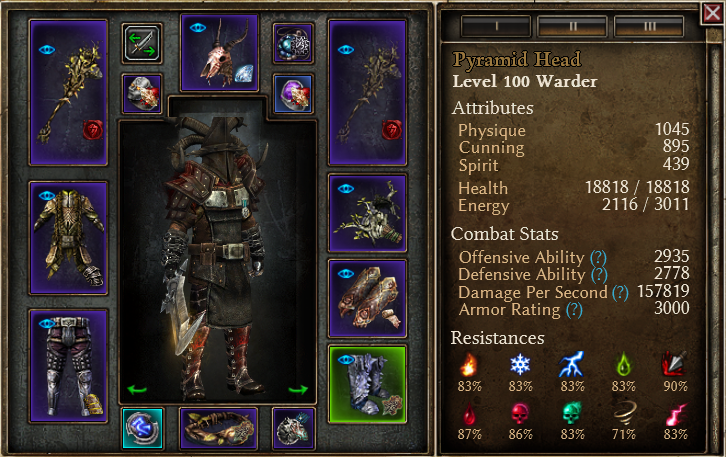 Amulet:Conduit of Wild Whispers with the -15% physical resistance to Devouring Swarm prefix. You can use Doombringer instead if you want more damage and a significantly stronger Feral Hunger.
Weapons, Shoulder, Belt, Chest: Full Nature’s Avenger set. The sweet bonuses to our WPS and that kick-ass proc are super awesome.
Gloves: Flexible. Mythical Sandreaver Bracers. Relevant damage, good resists, nice proc.
Medal: Mythical Sigil of the Bear King. Good damage, sweet proc, good resists with +max pierce resist. A really solid medal for any 2H physical melee build.
Head: Bloodrager’s Cowl. It’s the obvious choice with relevant damage, +1 all shaman, savagery bonus, and good resists with 5% DA.
Rings: Flexible. I use the Mythical Menhirian (nice defenses) and Mythical Goliath Signet, but you can use whatever floats your boat.
Boots: Thunderstruck Stoneplate Greaves. The suffix can be whatever you like, but preferably something with Elemental Resistance to avoid having to use Augments to cap them. If you don’t want to craft boots over and over to get Thunderstruck, you can use Mythical Stormtitan Treads.
Legs: Flexible. Mythical Chausses of Barbaros are a go-to for any physical build, and they work great here.

I love Oleron and gunned for it. You can switch up a few things if you don’t want Oleron, such as taking Falcon or possibly going Mogdrogen for more bleed support, but you’re going to need a way to get more bleed RR on to the build if so, since we only get 40% with maxed devouring swarm, a little more if you overcap.

I found that trying to squeeze in Rhowan’s Scepter had little to no positive impact on damage over other choices.

Closing
Thanks for reading, and enjoy the build! Let me know if you have any suggestions, comments, tips, or if I missed something super obvious.

Reserved for no reason.

Interesting,instead of full physical or bleeding you try to build both.
I am not personally fan of Oleron,is it better than Moggy the puppy?

Also if you struggle in SR against Moosi you can craft hoarfrost ointment and solve the problem if you see him in the mini map.Congrats on clearing 75!

Interesting,instead of full physical or bleeding you try to build both.
I am not personally fan of Oleron,is it better than Moggy the puppy?

Also if you struggle in SR against Moosi you can craft hoarfrost ointment and solve the problem if you see him in the mini map.Congrats on clearing 75!

The build as-is doesn’t have much bleed RR, unfortunately. Even if I moved skill points around to max Devouring Swarm, 40% is not enough for me to go hard into Modgroden over the massive physical bonuses of Oleron when I have such better RR for physical.

If you have an idea for how to swing some more bleed RR onto this build, I’d love to go over it. I know that bleeding is not as strong as it could be in this build, and I’d love to get it stronger.

Nice build, thanks for posting! What the hell is that disturbing picture in the OP?

There are no links for the individual items like you wrote, not that you need them imho.

Nice build, thanks for posting! What the hell is that disturbing picture in the OP?

It’s the titular character upon which this build is based, Pyramid Head, from the Silent Hill series (most notably Silent Hill 2).

There are no links for the individual items like you wrote, not that you need them imho.

That was an artifact from an older post. I have removed it, since I realized people can just look at the grimtools page to see what they do. Thanks for pointing it out