Hello people of Cairn. I’m here to show you another fun build, a vitality Doom Bolt spammer. So far I was able to play through all acts of ultimate, the four roguelikes, killed Lokarr and managed to do SR 50-51 on HC. 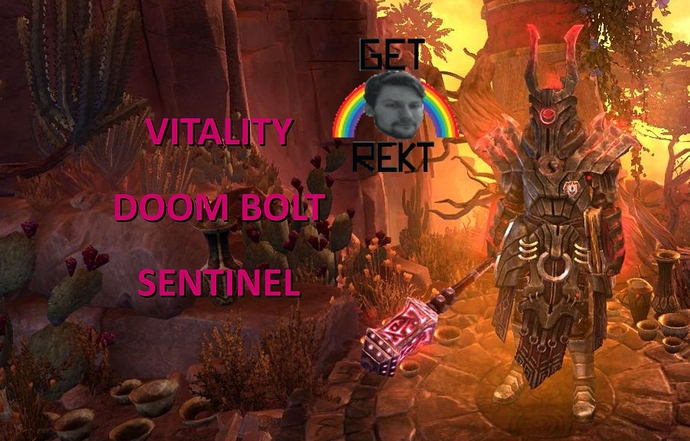 crucible: I kinda lack the motivation to play that mode atm

celestials (except Lokarr): Didn’t try with this meme build and don’t think it will be that nice to do.

Main Campaign Bosses and Dungeons: check twitch Vods for that, if you like to see the runs, e.g. https://www.twitch.tv/videos/446842388

I’d suggest giving Mythical Damnation the same -0,5s mod for DB as Mythical Clairvoyant Wand and the Bloodsword Repeater already have (or just give it more flat damage). Also could you make Mythical Pestilence of Dreeg’s ability a proc instead of an active? This build really has to press a lot of debuff buttons. Making it work the same way as Blightlord’s proc (you did an awesome job changing that one to a proc) would be nice! Then the build could possibly make the jump from being a meme build to being an actually good build.

Have fun bolting down DOOM onto your enemies!

Why Obelisk of Menhir when u can get Aon’s Hourglass with proc?

Honestly I thought Hourglass wouldn’t be that good as DBs CD was pretty low already, but dps increase should still be substantial. Double bolt every 16s, which would be a dps increase for DB of ~15% (15 DBs instead of 13 in 16 seconds, maximum) respectively 8% (13 instead of 12 in 15 seconds, minimum). So on average a 11-12% dps increase. It’s also great for Ascension uptime (~4 seconds downtime instead of 10). Stun res would be down to 0 during downtime of ascension though, which on the other hand would be only a short time. Still need to fix that a bit (leathery hide will maybe do the job). The dps increase mentioned before will also be higher because of the higher ascension uptime. And obviously also for Dying god proc. I will definitely test that. Thx!

Np! For me not about dmg, but u get almost the same resistance and CD proc wich helps u a lot, like u said.

Hey, I really can’t say how this stress on tankiness played out for your build, maybe it really worked great, but did you indeed try Aeon + Oathkeeper’s Passive? You will have Ascension 24/7 with that, plus if you add Ghoul, that’s gonna have a really low cd as well. Oh, and Oathkeeper’s amazing passive Resilience would up SO often.

The stress on tankiness worked out nicely so far (it’s HC after all), but hourglass really does seem very tempting. Ghoul though? I literally do not have a single %weapon damage spell except for bat devotion.

This is need to be tested of course. But it worked out amazingly well for the Dervish I have posted earlier. The synergy with high CDR, Ascension, Aeon, Resilience and Ghoul is off the charts, I was amazed how build was just refusing to die in Crucible when I was testing it. Of course it’s a different kind of build that has naturally tonns of adtch, but, maybe it can work out for your build too, I don’t know.
Ghoul just gives you physical resist and monster adtch so every little piece of weapon damage starts leeching like crazy.

Build is updated and tested with Hourglass devotion.
I also added some new videos, hope you enjoy them!

Thanks, I’m enjoying it. Do you think any changes could be made for Softcore SR?

So idk if the following will really increase performance and I probably won’t try them as I think they are not an option in HC, but I guess they can be considered and are worth testing in SC:

Edit:
Ok, there is one thing that I would maybe also change in HC: