So, with the release of 1.1.4.0, I was very excited to try the new Korvan Dunefiend Shadow Strike bonuses. We know that, previously, such a build had a lot to be desired, so I wanted to see if the new changes made the build viable as-is.

Grimtools - Yeah, I know, it’s G5 as all hell. Honestly, though, you could use whatever you want for the medal/amulet, they aren’t critical to the build. This was just to determine if the build was viable in general, which I think it is.

Sorry, I don’t know how to format in the new forum yet.

This build was able to clear SR 60 (albeit barely) and has a dummy kill time of ~24 seconds. Don’t know about Crucible, I don’t play it. 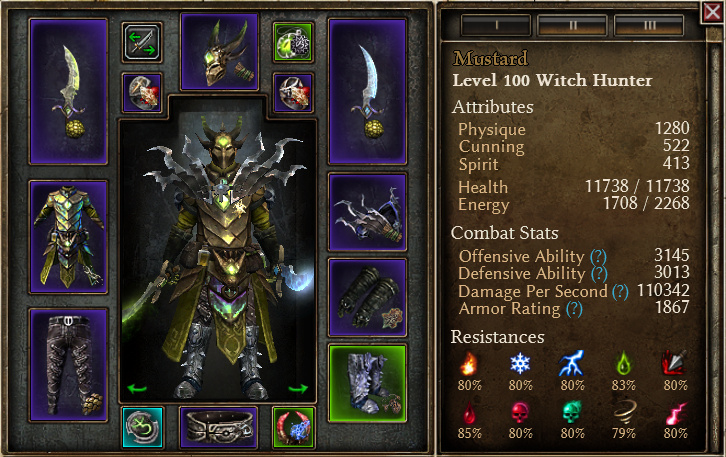 All permanent buffs with Lethal Assault, Blood of Dreeg, and Pneumatic Burst. Not too shabby. 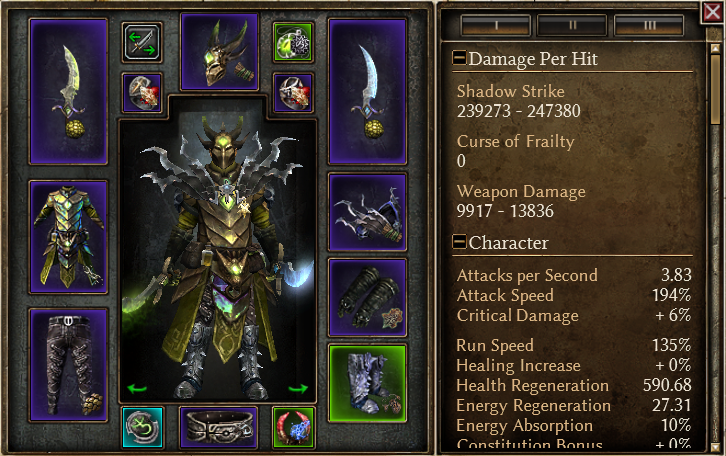 Shadow strike damage with all permanent buffs, Lethal Assault, Blood of Dreeg, and Pneumatic Burst. That’s not too bad, either. When you get lucky chains of SS back to back, it does some serious work.

One major glaring issue is the complete lack of critical damage anywhere in the set or the obvious supporting items. If I could get some critical damage in there, this would be a beast. For right now, though, it at least does the job, which is more than I can say for the pre-1.1.4.0 version.

Thoughts? Comments? Suggestions? Let me know what you think!

Btw isn’t Dervish better, cause of Path of three CDR?

For pure DPS, yes. However, the many bonuses to Blood of Dreeg as well as a more useful RR in Curse of Frailty makes Occultist stand out to me over Oathkeeper. Additionally, the conversion on Path of the Three isn’t needed and Possession has that sweet damage absorption, while Path of the Three has no defense at all.

I also think Blood of Dreeg wins out over Presence of Virtue. The OA is better on Blood of Dreeg and you get added flat and % acid damage, added % poison damage, and the set adds DA. I think the physical resist more than makes up for % health, and having a way overcapped acid/poison resist is nice. Also, that health regen actually helps a good bit against DoT bosses.

I think for crucible, Dervish might be better with Vire’s Might and Judgment (with a significant gear swap), but all the defense from the occultist buffs as well as the CC on Curse of Frailty seems better for survivability in SR.