So what builds I don’t do often? I don’t like chaos damage type and can’t play ranged, so my new build is both ranged and chaos

Also Harbinger is mono class Occultist set and chaos damage type is supported basically only by Occultist. so why not play Demo+Inquisitor here and bypass Occultist? 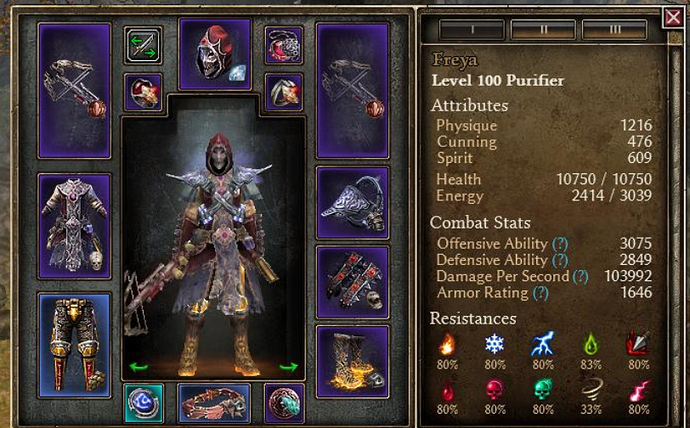 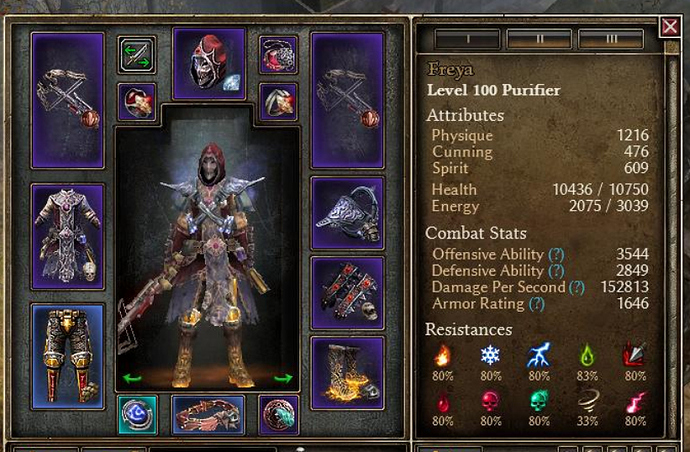 Well for starters Purifier is the best class for ranged because of the interaction between projectile based attacks from Fire Strike and Inquisitor WPS skills and also massive damage from the set… Also CDR is crucial cause it gives more up time to DG and Abomination devotion procs. Also dual RR source, build can deal damage.

But despite that is really glassy, it’s surprise for chaos build and I tried it first with Revenant but without Ghoul and nope, Ghoul is better. Outside of Crucible you’ll need extra flat RR though.

First of all set is very good, but +skills are lacking and build is really points hungry beast. Some other crucial or not choices:

Crucible tailored build for the new meta 4 buffs + 3 level Stormcaller beacons. Build don’t have high clear rate but not that bad. Also I play little bit kamikaze style, so maybe I am doing it wrong. Usual times are around 6:10 - 6:35 but here’s lucky run of 5:53!

Urgh…those resists are killing me. But nicely done, nonetheless!

Nice to see a harbinfier.

Urgh…those resists are killing me. But nicely done, nonetheless!

Nice to see a harbinfier.

I’d try it if I were you

I’d try it if I were you

But yes, I can use extra AS, that’s crucial.

Combustion band applies 8% RR on attack in a 3m AoE around you every 3s.

Voidheart is a 33% chance on crit proc, and the RR is single target.

But, but … she’s using a crossbow.

Ahh, Inquis is like that guy who always says they can do it better. (Although here it is just self-competiton of purifier vs deciever). Do you notice QoL powah in the WoP tweaks?

Anyways, Did you compare with typical fire->chaos convert gear (Sash, voidheart, Bloodsworn, non-myth Blood) vs current? The extra 30% conversion may compensate for the skill drops. But I don’t know, tbh, and am I just curious.

I don’t think it’s worth the skill drop imo. A lot of things are struggling to hit crucial breakpoints skill wise.

But, but … she’s using a crossbow.

From the other point if discussion, my belt gives both Demo skills, damage and massive OA. Perhaps Chain of Anguish could fit nicely.

Real nice results for a build that sounds like a meme at first! The set doesn’t even support any of the masteries! Iirc this is better than the deceiver (with two sets supporting occultist), isn’t it?

I agree with Spanks, this Box looks like overpianoing.

Cooldown reduction. It’s one of the powerhouse stats in end game.