Ignore the pretty green colour, this is a ray of pure chaos. This build differs from other Chaos AAR builds by not having to deal with pathetic vitality damage and by converting all the non dot damage to one type. I originally came up with this before the conduit nerf hotfix so I had to make some changes to fix the survivability issues that come from using Essence of the Grim Dawn.

The gear is focused on converting all the AAR damage and also capping AAR + Disintegration. I think everything here is BiS, but the affixes on the belt don’t really matter. All that really matters is the +1 arcanist really. Craft everything for %physique.

The devotions were originally more aggressive, but now that Essence of the Grim Dawn provides far more damage than conduit I had to make some sacrifices. Guardian’s Gaze and Behemoth made the build much more stable and reliable while still being incredibly fast. 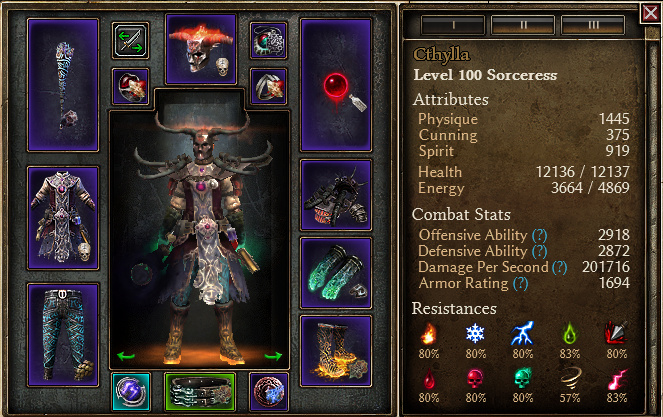 4:39 with pretty good mutators and good spawns. It’s pretty consistently at or under 5:15 though. I haven’t tested it in SR, but I imagine SR75 should be fine. Not sure how far it would go though.

Video of SR 80 with a couple of careless deaths.

AAR is still way too strong. The last nerf to the conduit hurt sustain more than anything when it’s the damage that’s the true problem. Sub 5 minutes with chaos AAR and sub 6 minutes with cold AAR is a bit too much. @romanN1 Managed a 4:19 world record with clairvoyant binder after the hotfix. I think the base skill needs some sort of nerf and I think clairvoyant needs a bit of a nerf too to bring it all in line.

Congrats for the great build and amazing run. I always follow up your builds and runs with pleasure and excitement

. Regarding your statement about my run, it was a lucky one. I’m still playing the binder and i couldn’t replicate it at all. Mutators helped, spawns were perfect and so on :D. Same for the non conduit one of 4.25.

And yeah, I recommended to nerf the skill itself and Crate and everybody were so against it. Well, look where it brought us.

I agree with Lee, aar base skill needs to be toned down a bit. Same for Valdun and more others. And lots of other builds need to be pushed up a bit.

Idk, but to me chaos AAR = warlock (sorcerer has all the elemental stuff already). It is a shame that occult doesn’t have the RR to compete. Warlock could be acid or vit, but chaos seems more worlocky in theme.

But yeah crazy Crucible result, Plasmo! In my next Crucible, I will have you as Crucible master, instead of @Lokarr .

Nice! Its not often I see chaos-converted Malice so props for that. Its almost always aether-converted powered by double Duality.

So basically you gotta pay 33% total dmg to have a red beam?

Tread carefully! Last time someone tried to get around preventive conversions on ARR and dared break a dedicated set, Zantai nerfed the shit out of just about every item on the build.

aar base skill needs to be toned down a bit.

Check this out. Box which is a per second ticking skill progresses 8 lightning and 5 e-cute/s per point after softcap. AAR which is a million hits per second channel gets 8 fire and 11 aether. Even the support node Disintegration gets more dmg per rank (10 lightning and 6 e-cute/s) than Box. On Clair, AAR - a channeling skill - gets more flat dmg from mods than nukes on some other builds (serious, more than Morgoneth SS and Venomblade ABB). Then, comes the magic stat 100% All Damage Dealt As Your Damage - on lightning and, turns out, chaos - which used to be reserved mainly for the armor-gimped phys.

So basically you gotta pay 33% total dmg to have a red beam?

Tread carefully! Last time someone tried to get around preventive conversions on ARR and dared break a dedicated set, Zantai nerfed the shit out of just about every item on the build.

Plasmo skipped the conversion on Tainted Power and the set dagger because of the offhand. Plus he managed to fit aether conversion in the mainhand. This gives better results than if he finished the set itself. Even the vaunted Clairvoyant AAR can’t get around the vitality conversion on the hat.

I can see Z giving this the Clairvoyant treatment and slapping a sh!tty AAR conversion skill mod somewhere. Maybe giving Spark of Reality aether to vit skill mod just so you are FORCED to take Tainted Power and the set dagger.

Yeah, I always thought that going full set is never worth it because blood orb exist. And here we are!

Crazy results one after another. You are one hell of a pilot, plasmo!

Even the vaunted Clairvoyant AAR can’t get around the vitality conversion on the hat.

It could. But Z nerfed all the items that made it viable.

My original devotion map had a lot more of both, but it just wasn’t at all sustainable. There might be a balance between them I can strike, but it feels pretty comfortable the way it is.

Same for Valdun and more others

IMO, enemies should receive a global increase in pierce res

I totally disagree on this suggestion. That would make Kaisan ridiculous.

You might be right. I don’t have much experience with pierce damage. Just spitballing here.

What if the aforementioned was applied to everything but kaisan?

I still believe it would be a huge gimp for pierce builds in general. Most of them if not all, dont have dissruption protection, and shattered + armored + though mutators, or any 2 combined, even one, affect their performance a lot.