Lightning is perhaps the most versatile damage type for caters and I have posted different concepts around it. This is Mage Hunter with two sets, parts from three actually relying on multiple small damage sources, procs along with huge OA and crit damage. So let’s roll! 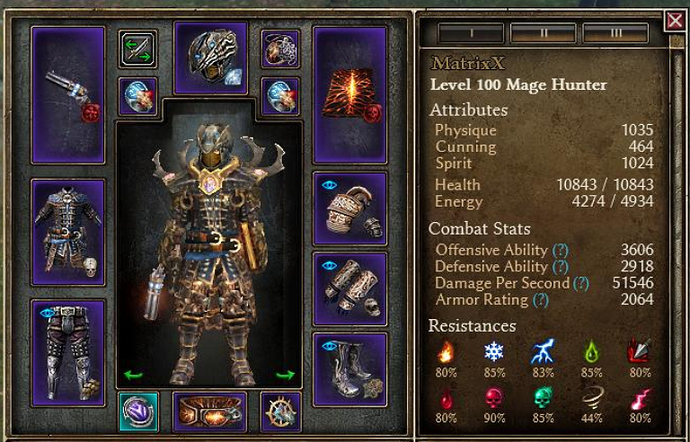 PRM is not as effective as in Druid version but I have plenty of points, worth investing in Distortion and Supercharged for pass-through and electrocute stacking. Most of my items have procs, together with Box, Chain Lightning and devotions I have lightning soup poured on my screen

Perhaps only problem is the lack of constant physical resistance. Grey Magi and Ghoul cover this problem but it’s still matter of RNG.

Build is solid in Crucible, can die only in Nemesis waves or 169 if you are too greedy and try gather all enemies around you. Times vary depending if you got Valdaran and Maiden spawning but also very dependent of your aggression. Average time is around 6:30, my fastest run is exactly 6! Video from it:

Neat build, Nery, a bit of a ressurection for Cataclysm set that fell of the map after its proc nerf.

Neat build, Nery, a bit of a ressurection for Cataclysm set that fell of the map after its proc nerf.

It’s one of my favorite sets and wanted to use it in a build. Actually not remembering when it was nerfed but outside of DMT’s Druid don’t think anyone’s posted Cataclysm build in last few months.