New patch will soon emerge and will present some new cool stuff and changes, so decided to do little farewell build. I use belt and boots that will be nerfed. Beacons change will not affect much the performance in Crucible, cause AoE is OK and flat RR is from both Revenant and Deadly Aim’s mod. 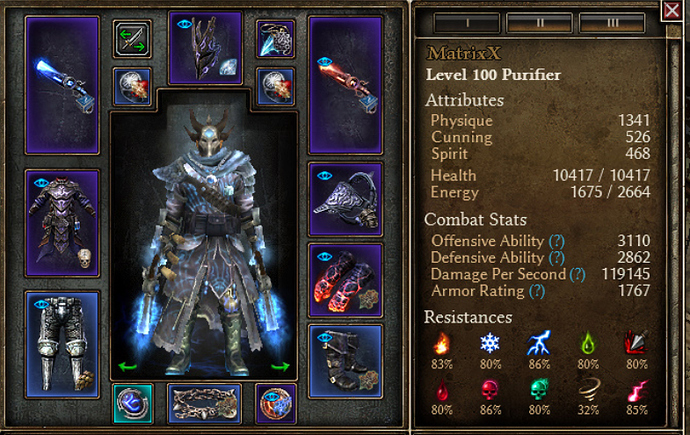 So build is lightning version, which is less intuitive than mix lightning/fire or full fire. Lightning can’t achieve good conversion from fire and is hidden behind unsuitable items - amulet with no skill bonuses and gloves with no attack speed.

Support gear is consistent from Final March for slow res, belt for +1 both masteries, will see with what I need to change them. Also:

Items crafts are with stun resistance.

Nothing fancy here, I did lazy build and lazy devotions map

Stand on Inquisitor’s Seal and shoot 'em up. Decided to make a lite version gunman without Box, BwC or even no Flashbang, just the necessary basic skills.

Build is decent defensively, Ghoul and Blast Shield don’t allow you to die easily, although health is jumping a bit too much.

Explosive Strike, Brimstone, together with WPS and gloves proc creates mayhem on your screen but unfortunately my old video card and processor don’t share my enthusiasm slowing my FPS and creates some lag.

So I did’n’t do many runs, just few. Here’s video with neutral mutators 6:04!

Patch will probably be released tomorrow or in 2 days and you’re still posting 1.5 builds! Damn nery

Patch will probably be released tomorrow or in 2 days and you’re still posting 1.5 builds! Damn nery

Is it a problem? I will not have chance to play soon GD, so that’s chance for me to post this build before have the opportunity to try new patch.

Still you don’t like this build, you are DW pistols fan, right?

You are wrong on one aspect Nery, fluff’s was a fire lightning hybrid