[1.1.5.2] The Aether Panetti's Krieg Spellbinder, Gladiator in 6 minutes on average

Credit for the similar build posted in AoM era by @ya1. 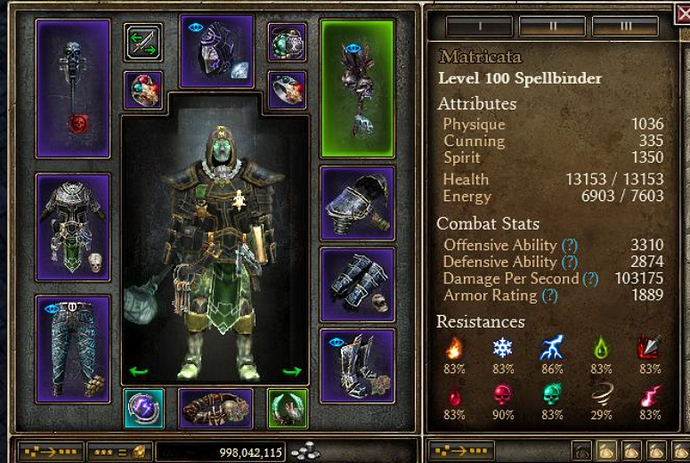 Core gear is 4 pieces of Krieg set, Spellgaze for AdctH, green medal and off hand. Decided to use Arcanist Conduit, but amulet with crit damage to PRM is also fine. Other gear:

So for Arcanist caster you want Devastation as nuke skill, use Callidor Tempest on Aeon to reset Devastation after using it. Also choose Ill Omen for damage reduction over Ravenous Earth. Decided to skip Siphon Souls, because build will become to much piano.

Build is solid in Crucible, but playing greedy may kill you in Nemesis waves. Against lesser opponents you’ll rarely even need Mirror. Time depend on Reaper and Alex spawning, but it’s fairly stable - from 5:40 to 6:25, around 6 minutes on average. Here’s my fastest run 5:39.

Solid build, great job. Have you tested Aldanar’s Vanity? Might be a very viable alternative.

Solid build, great job. Have you tested Aldanar’s Vanity? Might be a very viable alternative.

Aldanar is great idea, medal is without alternative but this is option for less expensive build. 30% and GD stashed affixes is better but Vanity will not be far and the proc+DA and OA is hot.

Might be very close because of more free skills and more Devastation.

Yes, I have been waiting for this!!!
Its going to be fireworks galor!!!

Jokes, Dreadfire is great too, RR proc is actually better.

Yes, I have been waiting for this!!!
Its going to be fireworks galor!!!

One thing I find odd about wrath of the ascendant is that it’s racial damage wasn’t touched during the balancing pass on racial damage.

wrath of the ascendant

It is a bit too much: +1 to all skills, RR, racial damage, cast speed, -OA/DA, duration proc, and large % boost. All the min/max fundamentals.

The only thing it doesn’t have is OA, which arcanist doesn’t really need now with changes to Overload.

In the GT link you dont use the skill from Wrath of the ascended, intentional or did you just forget to add it to skillbar?

In the GT link you dont use the skill from Wrath of the ascended, intentional or did you just forget to add it to skillbar?

It’s a Skill proc, not a granted skill you cast. 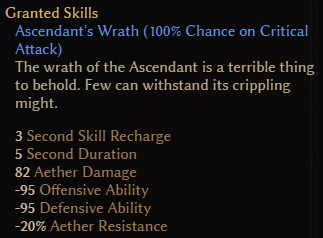 Still have a bit to go!..
https://www.grimtools.com/calc/pZrJyEOZ
Bit stale when playing so many other toons lately ( @Maya really, really drunk warlord… & @Superfluff Belgothian Sushichef…) , not really used to the ranged approach…
But not near as bad as the Petting… (@Maya)…
Pet’s are like trying to educate someone thru an interpreter… ( My guess is that, smoking green leaves gets you in the right backbeat…, Just kidding… but my metronome is totally of beat with pet playing style, and somewhat ranged builds… I really need to be in there and smack their faces, ASAP!!!)

When a former meme suddenly goes below 6 min

Why not off-hand of the Sands? Or Sorcerer’s/Templar’s medal?

Yes new conduit. That will hurt the build pretty bad I would say. Two options, either go with aether focused amulet or Heart of Malmouth. I think you should try the Malmouth ammy, mods to PRM and +1 Arcanist skills.