I was pleasantly surprised by the performance of Vitality Rune of Hagarrad (made possible by a prefix on this conduit), so here is a quick post that serves as a proof-of-concept. I didn’t level this build or else I’d have no time to actually test item changes before they’re released, so this post won’t contain a leveling guide. The skill point selection and devotion route kinda fell into place without much thought, but let me know if you have any specific questions that I can help explain.

Strengths
This build has huge amounts of damage mitigation from 22/12 Inquisitor seal, fumble chance from FoI, and damage reduction from Ill Omen. Most rune builds lack consistent and reliable healing, so taking the vitality conversion route conveniently solves this problem. Accordingly, this build just feels nice to play due to it being highly consistent. Also this build just got updated visual effects for the vitality versions of Rune of Hagarrad and Inquisitor Seal.

Weaknesses
This build lacks a passive circuit breaker, so it is possible to get bursted if you’re forced out of your seal (I’m looking at you, Valdaran). Low armor and low-ish phys resist means you’ll have to kite if more than 2 physically heavy-hitting bosses pile on at once. Kuba is also a pain in the ass due to his high vit resist and his ability to heal everyone around him, so kite his ass as well so he can’t heal.


Itemization
The build obviously revolves around the conduit, but the weapon and the offhand really push this build above and beyond. Any vitality affixes on the offhand will suffice, but also look out for the Sandstorm prefix. 3-piece Radaggan brings everything together nicely, and recent buffs to Wendigomane Leggings make it an excellent offensive armor choice for vitality builds. Morgoneth’s ring was also practically made for this build due to the conversion (for twin fangs), chillsurge bonus, and huge OA. Bane relic was mostly for fun, but the fully-converted proc does some okay damage as well. I tested Dawnshard grip but didn’t notice much change in how the build felt, so I stuck with a glove option that gave me better OA and more overall vitality damage for all of my vit procs.

Shattered Realm
Here’s a quick snapshot of an SR clear. Keep in mind I was stuck with sub-optimal mutators (armor penalty on my low armor build, increased enemy vitality resistance, 2 cast speed debuffs) and I was still able to complete 75 with little difficulty. 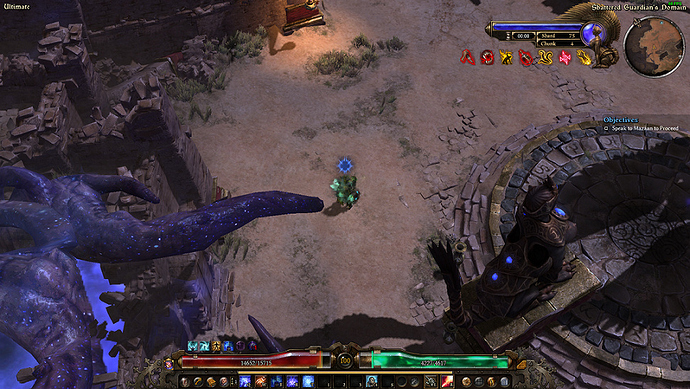 Acknowledgments
@Superfluff and @spikenik for shooting the shit with me

Aw the new rune not only looks great but works too. Nice. I didn’t get to try a build with it.

Did you try a component skill too or is FoI doing stuff?

Nice one!
Tried theorycrafting sth similar the other day as a Paladin for more cdr using acid spray as a filler instead of FoI. No idea if that would actually work or not though.

Is scaled hide really worth it with 1,7k armor?
Also why no MoT with radaggan’s mod?

I completely forgot about the radaggan MoT mod, so I’ll have to tuck a point in there.

Also scaled hide is because the sanctified bone kinda forces me into it, and I don’t want to give up that racial damage against the races that most resist vit

I was rather questioning the urge to have 100% armor absorb on a build with (no offense) trash armor, but super high flat absorb via inq’s seal. Armor seems kinda useless on this build, but maybe it’s still needed because of the low phys res.

Yeah every bit helps. The extra absorb is still a fair amount of mitigation. To be fair I haven’t tried it without scaled hide though, so who knows

Try soft capping bitting cold for DA shred and add soul harvest to the game for more damage. Or if you like to try a fantasy setup go for this for the fun.

What´s up with not posting videos with builds guides? Everyone loves videos.

Posting videos is a big commitment for me (very low internet upload speeds). Maybe I will eventually

I don’t really need biting cold because FoI is a DA debuff as well (50 DA less but that’s negligible). Maybe I’ll try playing around with soul harvest, but I’m not sure where I’d pull the points from

Posting videos is a big commitment for me (very low internet upload speeds). Maybe I will eventually

Understandable. If you have unlimited data and don’t mind a bit of an extra in your electricity bill I recommend leaving videos upload for nighttime. I did that when I had low upload speeds. You can even leave few videos for upload, ~8 hours is usually enough for most upload speeds.