Flames of Iganaffar and Olexra Flash Freeze are both cool and underused skills in end game builds. Combining them may seem like a builder’s nightmare, so it’s good starting point. Also go deep in so called Cronley Crawler part of devotion map - green/purple and using tr-elemental damage. So full on fun and unexpected build. Is it good, though? I think, yes. 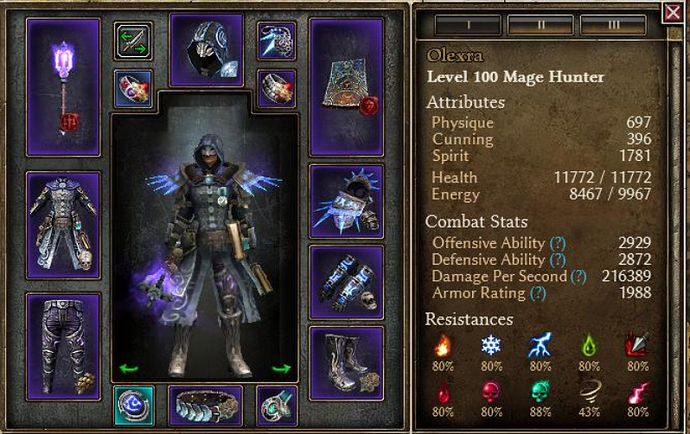 Stand on Seal, it’s your best protection, use OFF to freeze mobs (keep social distance with them) , Amatok Rune can freeze the enemies as well. Spam FoI with very rare interruption of Word of Pain for devotion procing and wide range small damage and debuff. Heal with Renewal, use Mirror if in grave danger.

The set I use here is Mageslayer, randomly dropped 4 pieces apparel. The other key items are here are the Fateweaver mantle, since physical resistance is low and Spelldrinker weapon, which gives huge % damage bonus, also converon from aether, cast speed and +1 Inquisitor, lot’s of goodies. Also important one is the Ignaffar relic, since build lacks good amount -RR.

As support gear, having this faction recipe medal is good, since bonus to Censure are necessary. Belt +1 to Inquisitor is vital, there’s the option of taking Arcanoweave belt with +1 both classes. Rings are for cast speed, I like Eternal Band here. Pants are for slow, either them or Final march boots.

Crazy proc fiesta with Sage, Serru, Leviathan, Hyrian and Elemental Storm. Hard to proc them all, especially on channeling build but so fun and colorful!

Also Ghoul is here for defense.

Build is safe in Crucible, except few enemies with huge burst damage. You freeze trash and FoI/Procs kill them.

In SR tried running 75/76. First 3 chunks are quite easy, boss chunks are very unpredictable though. In this run, most of the time bosses were solidly frozen and couldn’t fight back but if they are not they could create trouble. Moosi is pure cancer going deep(didn’t die against him) and there are combos that are nasty. But I can say with some skills and timing, build can beat 75/76 pretty regularly. Video from full SR 76:

Great results for an FOI build with no RR in devotions and really “alternative” devos for such caster.

No Nullification tho so 3 out of 10 jk

Great results for an FOI build with no RR in devotions and really “alternative” devos for such caster.

No Nullification tho so 3 out of 10 jk

So you finally figured what to say, no Nullification, jk

No Nullification tho so 3 out of 10

Yeah, I agree. How can you not use Nullification? One of the best skills in the game.

I would also go for Eternity relic on OFF freeze builds. It is such a noticable difference. And freezing is the main defense on these builds + that sweet RR from OFF.

Here’s my run of the 2h version from a while ago. It’s powerful but unfortunately FoI sucks to use.

FoI sucks to use.

I don’t like it either. It could go couple of meters further.

I’d use the green belt with aether to ele for the Seru.

keep social distance with them

I’d use the green belt with aether to ele for the Seru.

keep social distance with them

Yeah green belt is possibility, although you were core part of no green mafia, right?

Build isn’t that squishy but since I can avoid most hits by just freezing enemies and hot them with FoI, why not?