Just before new patch arrives I am not really playing, so here’s something I played but wasn’t posted before. It’s rare to see Gun builds outside of Purifiers, so it’s definitely worth posting, even if it’s not strongest build out there.

I know @valinov tested similar concept before, credit to him! 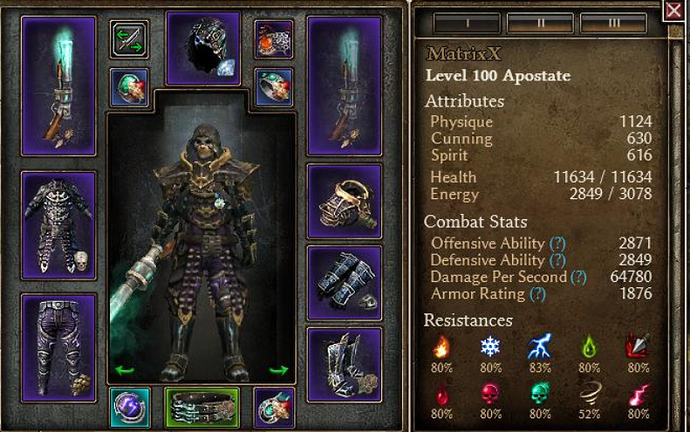 This one’s classical ranged auto attacker using Beronath’s Fury from the component, together with Inquisitor’s WPS skills. It’s a little bit too much piano, cause you need to put Seal underneath you, Bone Harvest for buffing damage, Omen for damage reduction and Siphon Souls. Luckily these are all skills with high CD, so not a serious problem.

Key item is Vortex of Souls weapon, which is crafted, have pass through for projectiles, physical resistance and +2 Necro class, definitely unique weapon. Also for Apostate set is key Bonemonger set, lot’s of goods. I use 2pcs of Krieg set as well. Other items include are Arcanist belt+relic, Magelord set rings and Tranquil Pants for slow res. Medal is here to boost the diminutive OA.

I tried few different maps, all lacked stats big time. This one is little bit more balanced with Spear, Dying God, Tower and partially converted Bat. I wanted to use Korvaak+Hydra+Spear but no. Ghoul is present for defense, Kraken is standard 2H devotion and Revenant for flat RR.

Build is sturdy, with nice life steal and physical resistance. In Crucible most of the time is safe, waves 169 and 170 are hard though. But success rate is decent, times are around 7 minutes on average, my fastest run is 6:42, video:

Once more a very interesting build!

Once more a very interesting build!