INTRODUCTION
I wanted to make aether AAR spellbinder in order to attempt Crate. On paper everything was fine, but leveling with AAR is almost impossible. As I wanted to stick with the arcanist aether theme, I decided to go with Panneti’s Replicating Missiles (PRM) due to their nice clear. While leveling I started to experiment a little, and actually PRM turned out better than expected. Crate will have to wait… 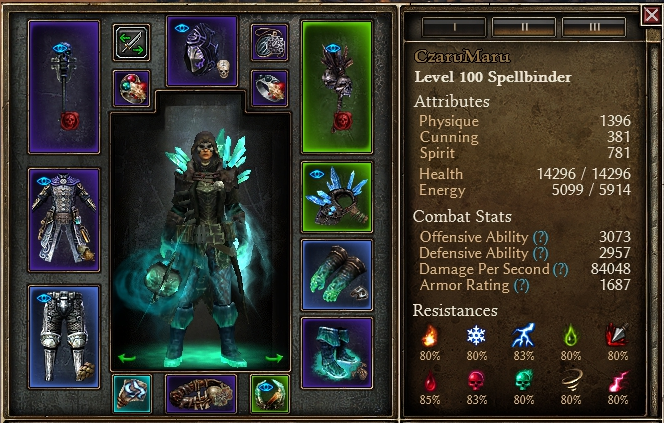 Stats above are shown for SSF version

MECHANICS
Offence:
The core concept is to convert as much damage as possible to aether, for which we have 128% resistance reduction. The conversion is achieved via the medal, scepter and ring. As many of the procced skills also contain fire component we use belt with fire to aether to boost the damage even further. This is also why, there is a few points in devastation. However, if you feel that there are already too many buttons to press, feel free to skip devastation.

Defence:
Leech seems to be the way of GD except a very few fights, so we try to take as much leech as possible. This is done via Vendigo constellation, medal and helmet. Additionally, Haunt lowers the leech resistance, so it acts as leech multiplier. All together is enough to facetank most of the bosses in SR. For the very few that can’t be facetanked the strategy is to cast Mark of Torment, Devastation, and after Mark is gone - Mirror of Ereoctes, then kite until you can cast Mark of Torment again. We also have high damage reduction and absorption through Maiven Sphere of Protection and Ill Omen. Additionally, whenever possible, I was choosing gear with physical resistance, so despite very low armor, the build takes very little damage.

GEAR CHOICES
I know that there is a lot of rare gear, but all greens I have were self-found as you can see from their strange affixes. The good thing is that most of them can be easily farmed and there are unique/legendary alternatives.

SSF vs GDStashed
Offensively there is not such a big difference, but GDStashed version is just tankier:

SR PERFORMANCE
Both versions, SSF and GDStashed, can go to SR 75-76 on ultimate, but of course the SSF one is more squishy (also fun and satisfying). Actually, besides Rashlaga there is nothing to fear, if you take bosses one by one. To illustrate how absurd is the GDStashed version, I was able to facetank two bosses at once in the boss room most of the time. However, even with the normal SSF gear I killed Grava and Mad Queen at the same time (no facetanking of course). So I think it is safe to assume that you can farm SR65-66 with this build no matter which version you choose and which affixes you have on your gear. 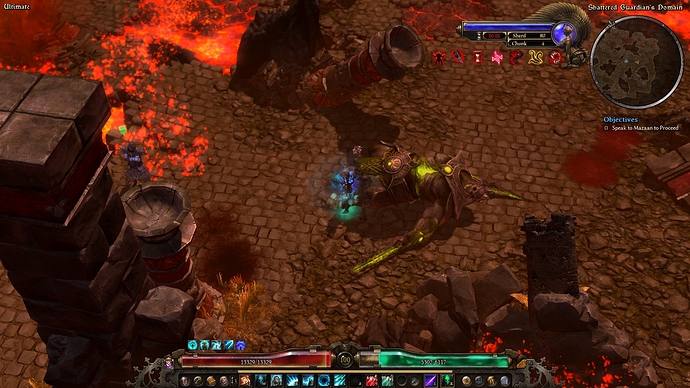 screenshot09.jpg1920×1080 1.5 MB
SR80 completed (timer stopped due to stupid mistake of trigerring Kaisan and Iron Maiden at the same time). The build should be able to go deeper, but this is already enough for me.

CRUCIBLE PERFORMANCE
I am not a big fan of crucible, but due to very fast clear speed of this build, the time may not be bad. Any testing is very welcome and I will definitely post the results here.

CLOSING REMARKS
I am very new to GD and this is my third build I make on my own, and first to publish. All remarks and criticism are very welcome.

Fun build! Thank you for sharing.

I would drop 3 points from Mark Of Torment tho and put them into Overload & Elemental Balance instead so these care caped.

(speaking for the min/max version)

@MergosWetNurse Thanks - that’s a good suggestion!

Any suggestions on replacement neck after 1.1.7.0 ?

@beserkjay Heh - I have just published first build and it is already nerfed. I have just tested the GDStashed version with Heart of Malmouth instead. The lack of +3 max resistances is very noticeable, and the build already struggled in boss room despite having almost 3400 OA and +25% crit damage. Maybe someone can test other alternatives, but for the moment it seems to me that the best alternative is still Conduit of Arcane Whispers but with different prefix. Also, do not forget that Haunt was nerfed as well…

The changes in amulet led to a rework of the devotion map in order to compensate for the losses. The results are quite satisfying - overall more damage and more tankiness than before. SR80 completed and I think the build can go deeper

The Devotion points… are impossible? Im trying to replicate this and i just do not have enough of the correct affinities to do it

You need to use affinity bonus from temporary constellation. Like harvest man scythe, you need to have three purple first, like get owl first, then do scythe after that refund owl.

Ah okay thanks, sorry i am very new

If you are new to the game, perhaps check out some of the builds here Beginner build guides Compendium (for AoM + FG expansions) they explain much more and also show easier gearing

So I have everything besides spear and scythe atm, I can put stuff in a temporary spot to get spear, which allows me to get scythe, but then when i try to refund it makes me take points out of both. I am confused.

You need to finish scythe before starting spear, because scythe gives blue affinity needed for spear.

Is there a temporary spot i am missing or something? If i put points in an affinity to unlock another, wont it always make me refund the end goal to remove those temporary points?

you need to complete the entire constellation to get its affinity bonus, and devotions can sustain themselves.

Basic example, assuming fresh devotion map to illustrate this concept.
Red point in cross roads.
Complete Jackal (provide 3 red)
Now you can refund the point you spent in the cross roads because the completion bonus of jackal can make it sustain itself (jackal require at least one red)

devotions can sustain themselves

Okay this is what i was missing. I spent too many crystals trying this so i was trying to save some by not completing up to the skill required. Thanks for staying with me my dude appreciate you