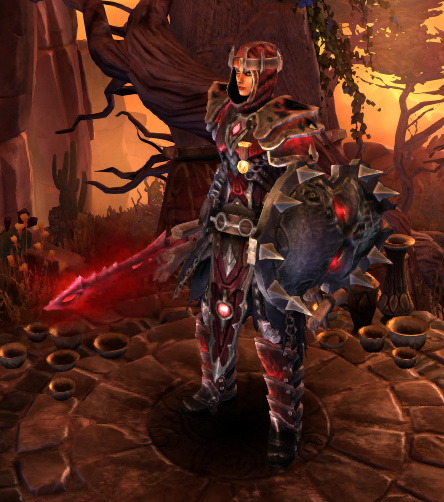 Here is a high evasion bleed warrior build. Here is a video completing 160-170 Gladiator Crucible with buffs, no banners. It might be possible to do Glad Crucible 150-170 with no buffs or banners. One day when I’ve bought some new underpants I might also attempt that. The build is not FAST as a solo build due to it’s reliance on ‘average’ damage dot ticks. But the build is tanky enough and does very well. It’s also very fun to play - highly mobile, with potential for tanking or highly mobile DoT hit-and-run playstyles.

The build works like this:
Moderate bleed damage (bleed damage ticks of 150-190k quite common). This is WITHOUT critical hits. Because the build is reliant on bleed damage, and has average resistance reduction, some fights vs undead are slow.

Can have many bleed dots on many enemies, which means that group fights are quite easy if you use a hit and run play style, dropping dots and moving on.

45% Chance to Fumble for 5 seconds gives enemies another chance to miss.

High DA, and an OA debuff to enemies of 150 (Rend Devotion Proc) gives you another 40% chance to dodge/evade most enemy attacks. -With the high DA, the 45% chance for enemies to fumble, and 45% chance to avoid melee (without ring/boots proc), melee enemies will have about an ~18% chance to hit you.

Isn’t this the best?

Edit: Extra defenses
Oh yeah, I forgot to talk about some of the other sweet stats. To assist with reducing damage from things it can’t dodge, this build has a resting poison/bleed duration reduction of 52% (Heart of the Wild + Aeon’s Hourglass), and a 25% duration reduction of all other dots. This goes up to 100% for both bleed and poison when Stone Form procs. On top of that, between Aeon’s Hourglass and the MI bonuses, this build has 75% Reflected Damage Reduction. This along with the bleed duration reduction means that you’re at low risk of killing yourself even when fight-spamming high reflect enemies (which can be a problem for bleed builds). The green MI also gives 50% resistance to Life Reduction which also helps to reduce spike damage from certain attacks.

Healing and Other Defenses
This build gets 16% damage absorption from Primal Bond, and Fleshcarver (belt proc) reduces all nearby enemies’ damage by 15%, for a nice combined 31% less damage from all affected sources of damage. This build has a healing totem, decent regeneration (1400) and decent life steal (22%). This combined with damage absorption, reduced enemy damage, and excessive chance to dodge allows the build to become incredibly tanky. Moreso against MELEE enemies than ranged enemies, due to the lack of “chance of impaired aim” to enemies (the ranged counterpart to fumble).

The build DOES have Stone Form. Let’s talk about this.
Due to the very high chance to evade attacks, a lowish chance to block, and then only 15% of those successful blocks will trigger Stone Form, Stone Form seems almost redundant in this build. When on earth would it actually proc, if enemies aren’t hitting you - and if they are, you’re not blocking often - and if you block, it still only has a 15% chance to proc?

The reason why I’ve left it in the build is like this: The times when you’re actually under serious enough threat to need Stone Form to proc, is often when you’re taking a lot of of fire from many, many different sources. When you’re fighting ~40 on screen enemies, with ranged attacks, spells, floor AOEs, environmental AOEs and melee guys, there is still a very reasonable chance for Stone Form to proc every second. In short - Stone form has a much higher chance of NOT proccing when you DON’T need it, and thus, is more available and more likely to proc when you DO need it.

The build is lots of fun. If you team up with a Curse of Frailty friend you can start dealing out Bleed proc ticks for up to 400k, making this build then have fantastic damage, and fantastic survivability.