INTRODUCTION - Where it went wrong…
The other days I was wondering on how to utilize Inashkor Corrupted Head especially the physical doom bolt part, but other item that support doom bolt didn’t support physical damage or soldier skill although there’s is an option for physical damage in several chaos item like that off hand, Eldritch Gaze helm, Demonbone pants, and Rah’Zin sets. I think that this 4 items can be combined together to make a decent build although the skill will went everywhere.

So I got idea to use item that able to proc doom bolt, and found this 3 items Doomtouch, Voidblade, and Depraved Sigil. But this item doom bolt deal vitality and chaos, so of course I’m going to use Gladiator belt for easy vitality to physical conversion, using that belt means not using Rah’Zin belt but it’s okay since I dont plan on using touch of chaos or WPS. Now I need to find item that convert chaos to physical, sadly the only item are Beronath and weapon slot are already filled with voidblade and I dont want to lose this one doom bolt proc. Then I remember that the helmet convert blade arc to chaos and all of the item used are also support chaos damage.

So I think again. Going rainbow damage is not recommended in grim dawn, the equipment already cover 2 damage type, the skill already went places, but I want to use doom bolt skill and from the proc. In the end I say f*ck it, meme build it is! The build then convert part of chaos damage to physical while also converting part of physical to chaos. Crazy I know. 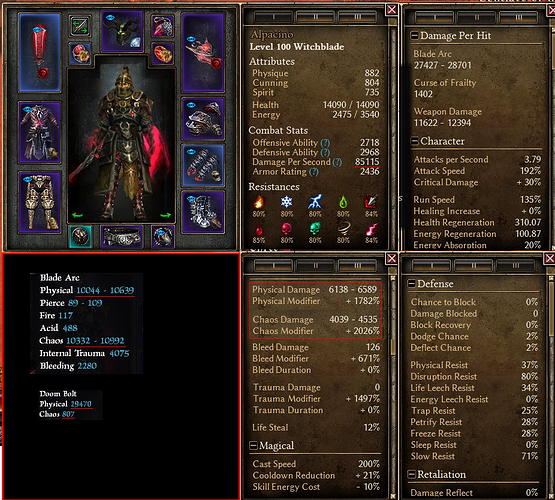 The build is capable to finish SR 80 but not within the time limit, even on SR 65 is barely able to pass within the limit. Most dangerous enemy are arcane hero (especially the wendigo and rylok one), Grava’thul, Reaper, Ram’zul (his slap attack take half of health), Moosi (due to low freeze resistance), and to an extend Kupa (due to he regenerated and this have low damage, just an annoyance making the fight take longer). This is gonna be a proof that however bad the build is gonna be, it’s still gonna finish the job. 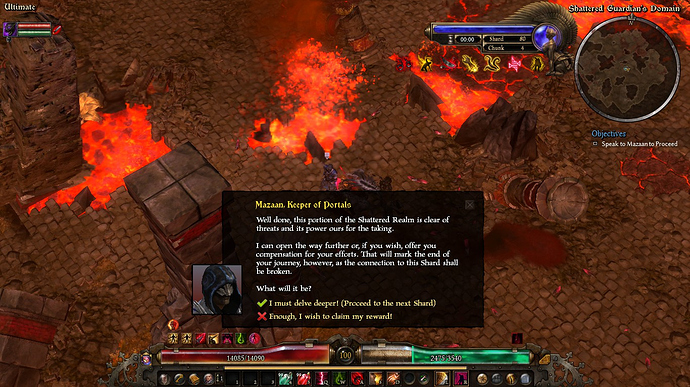 But, whats the concept to tag a build as “Meme build”?

For me it’s because it use of dual type of damage that don’t have much synergy between skills and somehow it work. It can reach max attack and casting speed while also being melee attacker and a caster with more than 20% CDR unintentionally. This build main feature is the 4 doom bolt it cast or proc, and only 1 is almost full physical while the other 3 are half physical and half chaos, the same with it blade arc which damage is split almost equally between physical and chaos. The funny thing is the source of physical damage in this build is a converted damage from both chaos and vitality so it ignore enemy armor, while the main source of chaos is from converted physical so the low physical damage from blade arc also ignored by armor.

We know that using rainbow damage on grim dawn is not efficient in the end game, but this build manage to reach that high in SR, in truth the hardest part of the SR is it shard level, somehow a group of 4 hero mob is more scary than Father Kymon or Ramzul.

Well, if you don’t hardcap your main skills, that may happen

You maybe right, I’ve redistributed skill like https://www.grimtools.com/calc/1NXD4b3N, blade arc dps is increased to 97k with critical up to 180k (before it was 160k) but performance is still the same. I might try Anarchy later, it does provide better base damage, but I think the lost of attack speed and cdr is not worth it, but who knows.

I don’t understand what’s the place of these Doom Bolt procs in this build. I think you’ve overdone it with the meme right there

I mean if I wanted to make Doom Bolt proc build then I would make it Chaos/Vitality (and I did and tested maximum number of procs with Tenebris for the flashiness and it didn’t impress me).

Just scrap these procs, make Physical Blade Arc (or sth else) with Physical Doom Bolt maxed out for the benefit of the humanity

It will still be meme but not a meme-ception as it is right now:

That’s why its named the Confused Witchblade

Well it’s the fun part of theorycrafting and then testing the build, I think the problem from doom bolt proc is the high cd with so-so damage. But that’s not really my main concern as I think I prefer full chaos doom bolt spam.

I do have a plan to make non-meme physical/trauma blade arc, but it need to wait until I finish with my ranged shield tactician (also not a meme build)

But that’s not really my main concern as I think I prefer full chaos doom bolt spam.

I theorycrafted Chaos Doom Bolt spam too but then I saw Vitality Doom Bolt God… And moved on to other things as this is simply the pinnacle of Doom Bolt spam.