First time doing a build here, so if there are n00b mistakes either in the build or in this post, please bear with me. 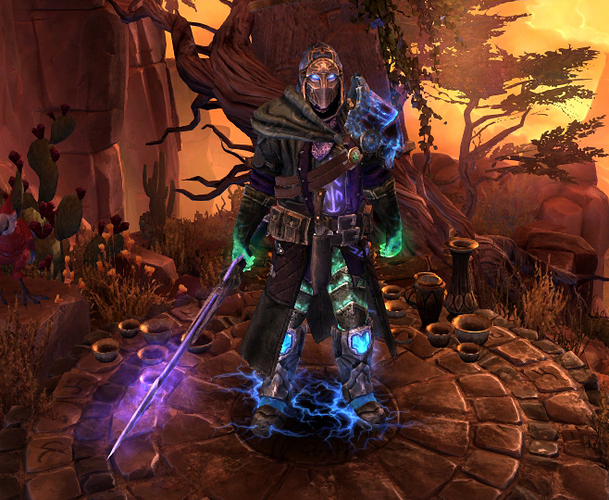 The idea for this build came from wanting to make use of the Aether Lightning skill granted by the three-piece The Arcane Tempest epic jewelry set. The first thing that jumped out at me was the 50% weapon damage on the skill, which made me think about using a big ol’ 2H weapon to not only maximize damage but to get some decent leech. I hadn’t played anything with Inquisitor yet so it seemed like a good opportunity to see what the build could do. 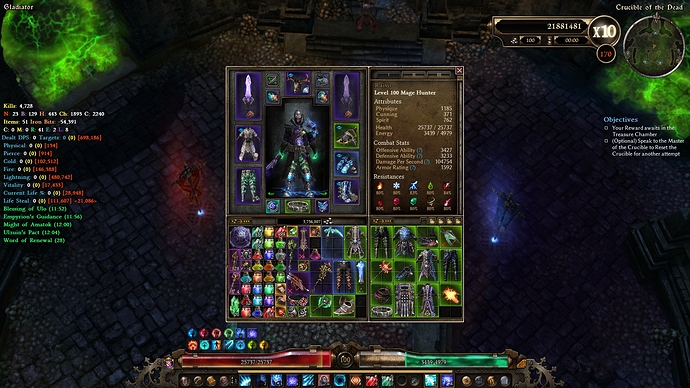 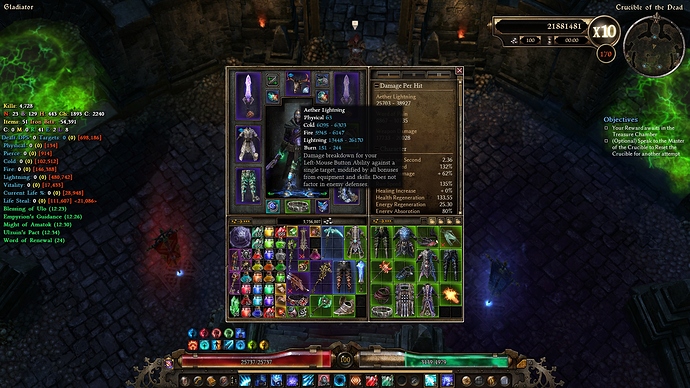 Theory:
Mythical Shroud of Illusion, Ugdenbog Waistguard and Ascended Epaulets convert all the Aether damage from the Aether Lightning skill to Elemental Damage. We get good multipliers to all elemental damage, and all of our RR except Arcane Bomb helps there as well. I thought this would be an interesting option instead of going all Lightning on the conversion as it will help kill lightning resistant enemies faster. I haven’t had huge problems with killing Valdaran, so I guess it worked fine.

The sword, relic, and Ravager helm give us additional RR. Ultos is bound to Aether Lightning, and we use the Mythical Purging Touch gloves for cast speed and more Aether Lightning procs. Boots and pants could be swapped for something better, but the build has plenty of resists except bleed so maybe just some more phys resist on the boots. I just like lots of procs going off.

Revenant for flat RR. SotH hits like a truck and heals a fair bit, too. I don’t really like the Imp proc as there’s nothing super good to bind it to and it just doesn’t seem to add much, but it is useful for green and blue affinity. Better devotion pathing suggestions would be welcome.

Performance:
I’m no Crucible speed runner, but this seems to be one of the best running characters I have played so far in Crucible. Huge Word of Pain AoE helps with aggro issues, and there’s just loads of AoE damage. The trio on 163 are slow to kill. Mad Queen is easily killed with Mirror up, and I didn’t really have big issues with double Reaper. All of the campaign content was quite easy.

That said, only 50% weapon damage means that the leech is cut in half vs. what you might expect, which is noticeable when Ghoul is cooling down and you’re taking big hits. The phys resist and armor are also quite low for my tastes and there’s not tons of DA. Against big, hard-hitting enemies, I find it might be safer to kite with Word of Pain and Storm Box ticking away while Mirror or Ghoul come back. I tried fighting Ravager and got completely wrecked so I wouldn’t really recommend this character for fighting Celestials. Going deep in SR would probably also not be the best idea as the single target damage and survivability aren’t quite what I wish they were.

It’s also obviously quite the piano build - I wound up binding Aether Lighting to my left mouse button, which is of course far from optimal, but it’s a somewhat short range skill so is almost melee-like in how it plays.

Still, I’m quite happy with my first real build, and how far I managed to take this blue item granted skill. Suggestions are of course welcome, and anyone who would like to tweak it and check for things like SR depth or Crucible times would be a big help as I’m not really the best pilot to post those sorts of things.

quite sad that this build went unnoticed.

Thanks! It’s a fun build for sure. Hopefully someone gets something useful out of this build post.