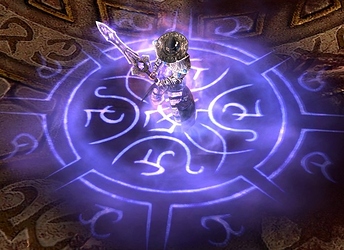 I’ve browsed the forums for guides using the Arcanor sword but the ones that I’ve found are either very outdated or more on the Fire side of things. I’ve known from further reading that fully-Elemental builds are pretty tricky to do, but I tried building around it anyway. As I was finishing the Forgotten Gods main quest line with another character, this dropped for me:

I’ve searched the forums again for builds around this helm, but very few appear. This seems to support Elemental builds, so I combined Arcanor with the Horns of Korvaak and came up with this build.

Final Thoughts
I had struggled to put this build together since pure Elemental builds are usually worse than single Fire, Cold, or Lightning, but it was fun testing and figuring stuff out. This can definitely be improved; I might have missed out on other items since I just used what I have.

I’ve never played elemental Forcewave, but your base OA seems a little low, which seems like a missed opportunity with crit damage that high. For starters, you can probably sink almost half your attribute points in cunning instead of putting it all in physique.

Im currently working on a build that needs that helm. Can you confirm- did this helm drop for you in Ultimate difficulty?

I got it to drop on my Pierce BM a few weeks ago in Ultimate.

I figure it probably only drops in Ultimate. Need to know where to focus. Thank you!

That’s the next optimization step for this build: balancing OA and DA. Thing is, I’m waiting for a good Aleksander’s Chausses to drop, so Physique and Cunning/OA and DA will depend on that.

Considering your high crit damage and low OA you should respec out of physique and into cunning to increase OA and therefore crit chance. It should help a lot. You have low phys res so let’s say somewhere between 2900-3000 DA would be OK. You have too much DA.

Gonna do the Physique/Cunning switch tomorrow for testing, probably some item changes, too. Thanks for feedback.

I know it kinda goes against the theme of the build, but don’t you think it would be better to spec towards fire damage? I would probably do something like this:

I’d rather use Shar’zul’s weapon instead of the Arcanor and the full Justice set if I want to spec Fire, but there’s already builds for that.
The conversions in your spec leave around 1/3 of the total Forcewave damage as Cold and Lightning, and I don’t want to deal with that. I would just go all-in on Fire if that’s the case.

Of course, but Shar’zul’s Forcewave Commando is a totally different archetype. I’m just trying to theorize maximizing the build’s performance within the constraints of this particular build type (classes/sword/helmet).