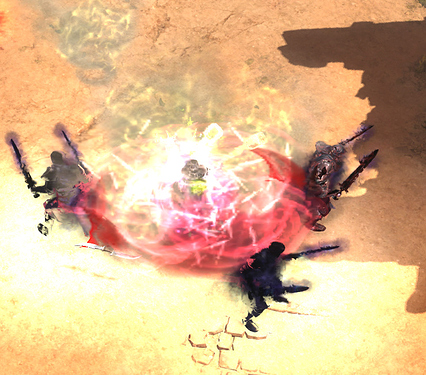 Thanks to Maska for the build idea, Roman for the crucible run, A.O for helping me improving the build, and to you for reading my thread !

there’s no such things as fake pets. any entities/concepts other than you that help you fight enemies in battle while you’re free to do anything else can be considered pets. because the idea is to let others do the job, while you do whatever you want.

for example, any kind of damage over time sticking on enemies can be considered pets too. you have lots of poison attacks? then you have lots of ‘expendable short-lived pets’ that sticks on enemies and damage them while you can: kite; use direct attacks; heal/buff; summon many other ‘pets’.

it may seem weird, but i got this perspective on ‘pets’ due to a great quote from Darkest Dungeon’s GRIM narrator (Wayne): ‘Great Is The Weapon That Cuts On Its Own’.

anyway, its an interesting bleed+‘pets’ build. worth a try.

The “pets” use my damage stats and don’t aggro enemies, they seem to just be an extension of my character instead of a separate entity, hence the “fake”. It’s very similar to the stands from JoJo, just a manifestation of the character’s willpower.
But I used the term “fake pets” to differentiate them from actual pets, whose playstyle is totally different

true, its feels like ‘pets’ with bonuses based on player’s are like additional separate limbs from player’s body. while pets based on pet damage are true pets.

i dunno, its still confusing. best just to roll with what crate gives.

This reminded me of an old classic. I pulled up the old Bloodrager PB Trickster and it seems like there really isn’t much new that can be done. I just plugged in my best greens and tuned the skills to my liking and it looks like the old pieces are still BiS except I put in a Magi ring and a green, but it’s all been done before I guess?

The main thing I get out of it that you might use, the Unchained Might gloves provide flat RR so you don’t need to stretch for Ulcama - given your choice of devo path you can take Panther, the lower head of Hydra, Fox, Ghoul, some very nice possibilities.

Unchained Might is a great idea, I can hardcap Circle of Laughter and get more RR on crowds and I only lose chaos resistance that I can fix easily, thanks ! I’ll still keep Scales (even though I’d love taking Panther), it’s a little more RR on bosses (we don’t have much here) and its immense life and energy leech is what’s keeping the build alive, and enables us to spam PB to stay even more alive.

About your trickster, I did the same build a long time ago but investing more in Feral Hunger and Circle of Laughter, those 2 provided way better bleed ticks than PB… You can use the judicator ring with 10% reduced resistances, it makes quite the difference in kill speed.
Anyway this was my trickster : https://www.grimtools.com/calc/O2Gq15jZ
About the same gearing, unrealistic greens too, and it was before Scales got great

When I got those pants they just screamed “Shaman,” either Trickster or Ritualist. I love them both but with Trickster I can take Shadow Strike if I want to hop, bleed, hop, bleed, and don’t care about collecting any loot!

I think you have the right idea about hard capped Savagery, since the +bleed should apply globally. Thanks for the ideas!

So I am about to try this interesting build but I dont know much about game mechanics so does this post means a change in gear or skills or devotions compared to the set up in the OP?

Just a change of the gloves, that frees up 2 skill points from Circle of Slaughter you can put anywhere you want. If you use legit MIs and need more elemental resistance overcap, you could put them in Elemental Awakening for example.
That’s the only change I made ; right now I’m looking at the Deathstalker relic, it’s only 1 pseudo-pet compared to Azrakaa but the 10 bleed RR it has may be better, and I’m looking at using my own legit MIs. I’ll post a new link when I’m done testing it.