Hi. This is still not the aether pistol build I want to publish. However it is 2 guns, all fire, and not a purifier, and after a few tweaks is holding up well as long as you don’t face tank physical damage all day long. Stronghold has already been explored so I didn’t consider it.

Pulled out some older guns for this and skipped the standard Justice set for fire to see what conversion and stacked flat could get us. Exterminus usually only sees the light of day in a darkblaze setup, while Deviltongue did have a resurgence thanks to @omnitrio. As posted I’m using GDStash, but in the new world of 1.1.7 these are no longer crazytown rolls. The + skills are gravy and flexible affixes mostly to patch resist holes, which we need because this is set bonus-less. This isn’t quite the nutso results I was hoping shieldbreaker pistols could pop out, but maybe someone else can tweak it to super glory. 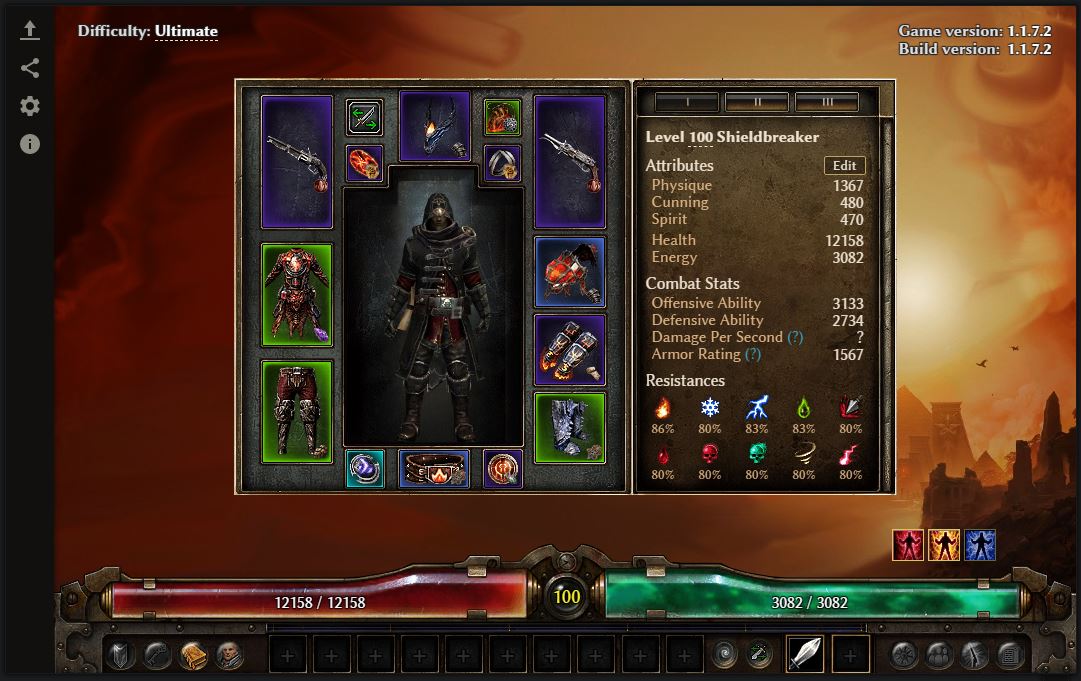 @Crittrain completed a ~6:00 CR run with it after we did some survivability tweaks and SR65-66 is a breeze. But uh, 7% phys res (9-10% in game) will get you one shot if you’re feeling high on hubris. Resiliency and Blast Shield will give you time to burn most things down but gtfo of dodge after that when needed. It’s the only piece of defense I haven’t had a good solution for but is manageable.

Guns: Already listed, Exterminus and Deviltongue. Getting full conversion of the former with good rolls and taking the -20% fire RR while the latter’s proc helps keep us standing. I tried dagallon guns in place of deviltongue but the results were surprisingly disappointing. Can leave passthrough on the sideline here.

Rings: Nothing crazy here, combustion band and entropic coil give us flat, skills, and RR.

Necklace: So much flat if you can land a searing vilgazor’s heart. Conversion helps with bat for sustain. Alternate option here is Shard of Eternal Flame to still get flat and help with mobility cooldown.

Helm Okaloth’s Visage is the fire based fire strike go to. We use the skills, the conversion, the mods.

Chest: We need chaos conversion, so Galakros Singed Plating fits the bill. With on theme fire damage rolls this can give us more than Ulzuin Chestpiece.

Pants: Potentially flexible, but Solael-Sect were used after first iterations lacked sustain. Firestrike is not always the best leeching vehicle so we’re taking the extra ADCTH. Mods are gravy. Attack speed is hard to max so of kings proc is helpful.

Relic: Annihilation gives us flat, speed, demo skills, and a bonus meteor. We don’t have much room for phys->fire sadly to crank up the proc but it’s still useful.

Medal: We’re not one of those innate dual wielding inquisitors nerds so we need that covered here. Korvaak fits best of our options as we’ll convert the lightning on fire strike and rest of mods and skills apply.

Boots: These are admittedly the worst of the GDStashing. We need phy res something awful and these will give base + affix. Really just covering holes here that purple boots don’t, as we don’t need the usual stun/slow res.

Gloves: Started with justice gloves, but a stiff breeze knocked me over, so these and shoulder now vary from the standard FS options. Worth revisiting to get MOAR FLAT, but the conversion helps bat keep us upright.

Shoulders: Originally shadowflame, the choice of FS nerds everywhere, but again changed to get some additional bat help. We still roll 20/22 brimstone which gets us max shards, we get used out of skill mods, the flat makes up for no justice gloves, and conversion helps the bat proc. Also worth revisiting since shadowflame also has phys res. Would make this swap first.

Devotions: Standardish fire and converted chaos tree. We take revenant over rhowan’s crown for extra ADCTH and attack speed. Bat helps with sustain since we are converting chunks of pierce and vitality flat, Torch for meteor parties and Abomination to abuse flat chaos conversion. This has worked out to be the most consistent sustain, but I do still want to try versions with magi rammed in as well. Also a strong case for Ghoul considering our lol physical resist, but I am biased against ghoul with no CDR so here we are. If you’re having trouble staying standing due to physical bonks, this is where I’d go to change.

Craft: Boots only, so whatever floats your boat. DA is near my 2700 baseline for SR so I went phys%.

Gameplay: Point and shoot. I usually vire in to trigger Abom, drop mines and flashbang, shoot. I’m one of the sorry few who enjoy the disengage runes, so I’ll sometimes leave my back open and then dash back in with vire if I need the damage reduction from Wretched Desires. At least when a single pixel of a blood splatter on the ground doesn’t block the disengage jump.

Crucible: when @Crittrain or @romanN1 are kind enough to record a run for me this evening, will link.

SR: I’ll get a recording of SR65-66 and see how high it can push. Phys res is going to be the limiter of how far this is fun to actually take so I doubt I’ll bother past SR75-76 range.

Leveling Guide: Sorry, while I still keep my legit stash and level the builds I enjoy most, my limited time to play means build making is done 100% in GDStash these days. Shieldbreaker has a multitude of leveling options. End game this requires some MIs to get all chaos converted so this isn’t for folks without an nice item pool to work from.

You can pick up some phys res from Jackal and Sailor’s Guide by sacrificing Eel and the flat burn from Ulzuin, not sure if that’s a fair trade since it’s hard to come by DA even with your full physique dump. Maybe the good old simple as dirt Legplates of Valor.

Do you think Korvaak medal is more relevant than Pyroclasm? Pyroclasm has a splash radius, flat fire instead of elemental in the WPS and Vindictive Flame points. I think it’s probably a tough call there.

Did have jackal for awhile, and yeah, can drop two torch nodes to finish off sailor, may be a worthy trade. Neither layout is giving a huge bump so I went the damage route.

RE: korvaak vs pyro, it’s worth testing, but I went for static strike and smite bonuses since both are used/converted. Pierce resist also helps being just over the cap