I’ve been obsessing over healer/support builds and trying to make them powerful solo builds with decent damage. I’ve come up with a few so far, and this is one of my favourites

Enter: Sage, the elementalist. This is a powerful support mage, featuring the full Mythical Apothecary set, 4x mortar traps, 4x storm totems, a whole lot of healing and a whole range of other benefits. Below is a vid of 150-160, which was easy until 160 where I got spike-damaged and died. It shows that the build is incredibly powerful, and even passing some of the difficult waves (154) was a piece of cake. But, the death shows that while healing is fantastic, damage mitigation is a bit lacking - Other sources of damage absorption could have saved this build in this circumstance. Still, I’m very confident that on a second attempt this build could at least clear to 160 solo.

Highest crit on a mortar trap hit so far is 143k, so having four of these plus four storm totems plus whatever other damages you’re dealing all adds up. The best part of the damage though, is the sheer amount of AOE damage it deals. It’s clearly not going to win any single target DPS races, but the difference between single target and AOE damage is very slim, so clearing a room full of enemies (including bosses) takes about as long as it does to kill a single boss in some cases. 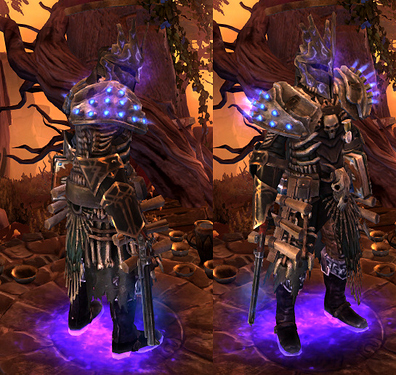 Let’s get into the build!

Other things to note:
: Low level Primal Bond + Light of Empyrion are primary sources of damage mitigation.
: Eternity relic keeps mortar traps, totems, heals and devotion buffs/debuffs on low cooldown. Also helps with Blast Shield.
: Having 8x ‘turrets’ deployed will allow you to do damage while kiting.
: With all buffs up, you have ~2500 health regen, not including wendigo totem
: Resistances are all overcapped, but only by a little.
: This build has LOW phys resist and armor, so certain enemies will require more kiting than others (Sentinel in particular).
: This build uses a Level 40 ring, because it provides an integral +2 to mortar trap, allowing you to get the fourth mortar trap.
: The green item really just needs physical resist on it, and if possible, more elemental damage.
: On top of all of your heals, Ulzuin’s Wrath and Tip the Scales will also help to keep your health topped up.

The AOE damage of the build is clearly nuts, and this build will provide a decent protective boost to your team while thrashing the room with elemental damage. What fun!

I like the concept. It reminds me of my pyran soothsayer sorc I made. https://www.grimtools.com/calc/b28b1QKZ The build is quite strong while averaging 3k+ hp regen (going over 6k at times with buffs/high rolled items)

I did some minor tweaks to the components/resist augments/skill points which should have some improvement. https://www.grimtools.com/calc/RVvw4EpZ I didnt do much to change the core idea of the build, as I assumed you picked certain things for your own reasons.

I like the concept. It reminds me of my pyran soothsayer sorc I made. https://www.grimtools.com/calc/b28b1QKZ The build is quite strong while averaging 3k+ hp regen (going over 6k at times with buffs/high rolled items)

Thanks for the tweak suggestions, I’ll have a look in just a moment.

The build is a lot of fun! You might have seen I made a team build concept around traps/totems recently. This is a tweaked version of the Augur build to be more solo friendly. I might start working through the tanks etc. The ‘damage dealer’ variant of this build can get 5 totems and 5 mortar traps which is exciting, but the damage % was a bit lacking. I’m sure it can be tweaked though, there’s plenty of room for minMaxing on those builds