This isn’t an entirely original build but more a working proof of concept. Base build is from Alkamoshater’s DW Aether Spellbinder that I modified to fit the newly released Rutnick’s guns. You can tell it’s been GD-stashed as I actually forgot to explore the new Arkovian Docks and kill Rutnick for his guns just as I finished running tests on this. 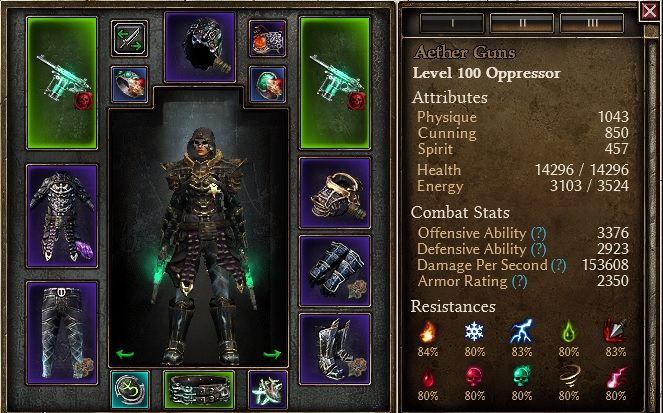 with Bone Harvest and Ascension up

(Helm can be crafted for stun or slow res, depending on which you need more)

[update] Swapped the rings out for Magelords as per klasperstanze’s suggestion so we gain up to 60% elemental to aether conversion, improving Smite and Soul Harvest procs. Necrotic Edge was removed since I forgot the guns also had WPS procs and redistributed the points instead. Overall, the build gained a bit more DPS despite losing 10 RR and the dummy kill came out to 25 seconds, 2 seconds faster than the original build.

I don’t play crucible so I wouldn’t know how it performs there.

Congrats to the 1st official Ridnick Build!
Currently levelling one of my own. Quite similar. Going more with Hydra and Korvaak instead of Scales. You think they make sense here?
Anyway, great build, good stats! Found my love for Gunslingers again thanks to Rudnick.

Congrats to the 1st official Ridnick Build!
Currently levelling one of my own. Quite similar. Going more with Hydra and Korvaak instead of Scales. You think they make sense here?
Anyway, great build, good stats! Found my love for Gunslingers again thanks to Rudnick.

Thanks! I’ve seen people build a Templar and Paladin but I haven’t seen Oppressor so far. Korvaak would be nice if you can find the room for it without giving up too much. More crit and damage is always welcome since the build has good OA already. Hydra feels lackluster to me and the only thing I like there is slow res, which is why I had to spec the belt to cover that. It could work though to cover the loss of life leech from scales. I just wish we had more ways to convert elemental damage to aether. It would be nice to have a full power Soul harvest and Necrotic Edge on proc.

Magelord´s I see. Not more…

Magelords were also on my list but I haven’t tried them yet. It could probably work?

Magelords were also on my list but I haven’t tried them yet. It could probably work?

Yes, it should work fine. They’ll convert up to 60% of Elemental to Aether, so that will gain you some flat from Soul Harvest. Necrotic Strike won’t do much though, since it’s only single target hit, but you’ll get 60% of the Cold converted there as well. You gain a proc that deals Physical & Aether too, so every little thing helps.

You do turn Smite into a bigger piercing nuke WPS though, since you convert the Fire to Aether.

Ah, and the sum of your WPS exceeds 100%. Less necrotic edge i suggest.

@Crittrain and I went back and forth awhile on magelord vs veilwarden+tawrot on oppressor. Despite my napkin math, going full vit conversion worked out better in practice, even with the same devo map with multiple elemental conversion chances. I haven’t had a chance to test other devo paths to take more flat vit yet.

Crit was down closer to 5 minutes on addition runs with https://www.grimtools.com/calc/m23b0ojN

Nice build. I have the same setup with gear but took Phoenix instead of Scales. Is Scales just there for the lifesteal since Smite already has Flat RR from Bonemonger?

Ah, and the sum of your WPS exceeds 100%. Less necrotic edge i suggest.

Thanks for the reminder. I keep forgetting that the guns themselves have WPS skills. I removed Necrotic Edge altogether and put the points into consecration and siphon souls.

Is there any reason why you maxed out Celestial Presence?

Yeah. Phoenix sounds nice though. Could you please share your grimtools?

Is there any reason why you maxed out Celestial Presence?

To make use of the RR available to you since you arent converting elements.

Also gives a (tiny) bit more aura radius if you’re not using pet attack to keep them where you’d prefer. Build has some slack points to play with

Green items are just ones that I have, I prefer not using GDStash to see what I can come up with.

I mainly built around gear for survivability since I did a sort of spirit dump. I was also thinking about getting Bone Harvest for the Soul Harvest buff since it has 100% Vitality to Aether global conversion, I’ll try out your skill build later.

It gives a 34 percent total damage increase for me. You do should try it.

Fair enough since you don’t need as much hp for crucible.

My only pet peeve is that my guns outrange bone harvest for a ranged build.

You manage to keep such a big distance to your enemies? Well, at least for charging hard hitters this may not be the case anymore. That’s also the time when you desperately need that extra damage. Well, I do at least.

My only pet peeve is that my guns outrange bone harvest for a ranged build.

It may seem annoying to have to stay within BH range, but it becomes second nature after a while. The only issue I find with BH and DW Ranged builds is that the BH may not travel fast enough to hit them before you blow them up, so you need to get into their face.

The positive is that Necro based builds usually go with Harbinger of Souls, so you’ve got a decent ADCtH and can leech back the damage you may take initially…

It’s mostly for corner case scenarios like Zantarin and trying to kite when I accidentally aggro 2 bosses. I’ve gotten used to it though after a couple of tries. It’s just a bit annoying when it falls off.

Yeah, what I noticed with this build: it’s actually possible, for me the 1st time, to kite while attacking [stutter step] thanks to oathkeeper and his VM, which allows skating with an additional rune.