The idea behind this build is to use proc Sky Fragment from suffix of Fallen Skies on rare items. I tried to put maximum of these procs on the character. So that it is thematic I decided for a Druid using Trozan’s Sky Shard and Wind Devils for resistance reduction. Sky Fragment has 1.5 second skill recharge so you want to use Eternity relic to shorten it often. I decided to choose Stormcaller’s Pact instead of Star Pact because it would interrupt using Chain Lightning skill from component and it gives a lot of critical damage. Star Pact would give like 0.3 seconds more often TSS but I don’t find it worth choosing it. It is a funny and powerful build with constant barrage of projectiles from the sky

BUILD IS FOR GDSTASHERS ONLY because of crazy double rare items that cannot be realistically found in the game!!!

I have other totally green builds here. I also have other lightning casters here. All my builds are here.

Monster Infrequents were chosen in such way to fix things in the build (resistances, additional bonuses to skills etc.). Pick shoulders with as little conversion as possible so that you have dual damage build against resistant enemies. Crafting bonuses on both boots and gloves are to freeze resistance. 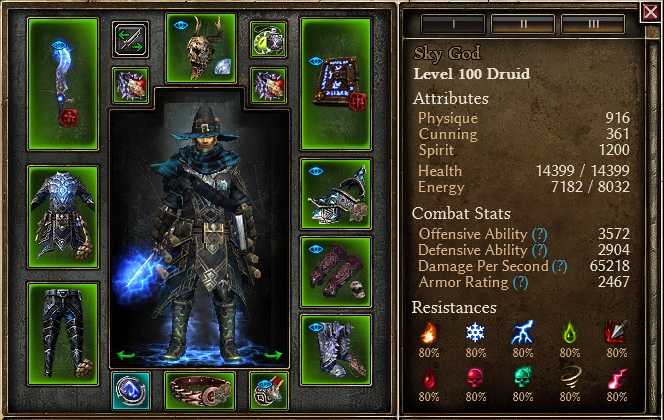 SR 65-66 is very easy. Build also does SR 80 easily. It behaves like a glass cannon so play accordingly. It can go higher but I don’t push my characters higher. Change Rune to Amatok’s Breath for SR.

pff with next patch all of those greens can be farmed legit in no time!

Yeah we will also get Nicolas Cage next patch… Ingame, that is.

Yeah we will also get Nicolas Cage next patch… Ingame, that is.

pff with next patch all of those greens can be farmed legit in no time!

You mean hail mamba will be no more?

You mean hail mamba will be no more?

The GD stashing days are counted!

The GD stashing days are counted!

You deserves the classic!

I have updated this build with a new link for patch 1.1.7.0 version. Let’s hope that it will be now achievable even for non GD stastahers.

Really interesting and strong build but items are almost impossible to farm as you said. Can you share the character file? I really like to try the build. Thanks for sharing.

Thank you very much

cuz you can never have enough skyshards, right?!