The reason behind this build is to create a physical skater. Because of passive RR I decided to go with Oppressor. For skating Vire’s Might and Amatok’s Breath is used. For throwing Aegis of Menhir is used. For lifesteal build uses Siphon Souls and Scales. Damage conversion to physical is done by Beronath sword and Gladiator’s Distinction belt. Core of the build is the Stonefather set - it gives bonuses to both Vire’s Might and Aegis of Menhir. Build deals a lot of internal trauma damage. Enemies are not resistant to it much and they go down fast. Greatest threat is reflected IT damage. Build has because of that high physical resistance (39 %) and high reflected damage reduction (50 %). But even with that you can still get reflected damage of over 2000/s (usually 1000/s) so be careful around reflective enemies. Build has good flat damage absorption from Stone Form and Ascension. And it has damage reduction from Ill Omen. It can do SR 80 easily.

Crafting bonus on helm, sword and boots is to physique. Put enough points into physique and spirit to equip items and rest into cunning. Build uses one monster infrequent item - Ronaprax’s Sting. Affixes don’t matter that much. 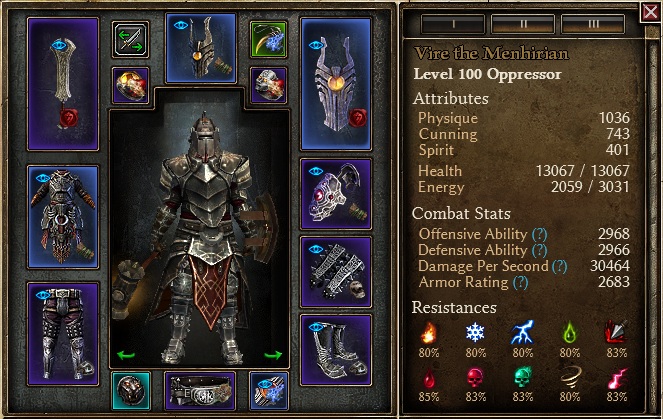 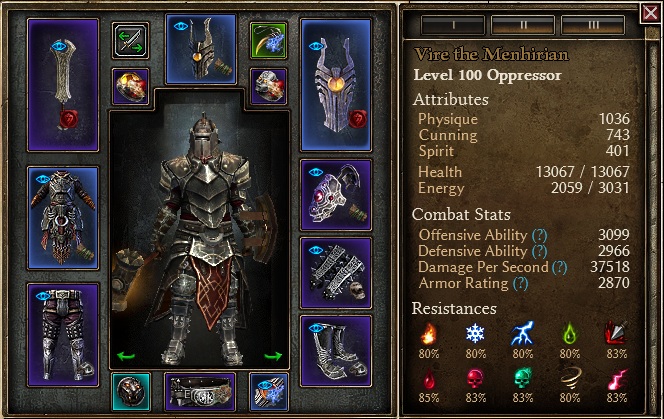 It does SR 80 easily. No boss is a problem if you avoid getting hit with movement skills and use Mark of Torment at right moments. It can go higher if you are a skilled player.

One point in Safeguard gives you 7/12. Judgment is better than SS, because you have Beronath, and it has better AoE, deals pretty good IT dmg (which ignores armor). Ill omen is a waste when you already have LoE.

SS heals. That is why I have it. I have another Oppressor prepared with Judgment. This one was meant to be without it.

Ill omen is a waste when you already have LoE.

It is not because you want to have it applied 100 % which you don’t get from devos due to it being procced.

Because trash mobs die too fast, and only bosses+ are threat vs a shield build, as they have tons of armor/physic res, the heal returned value would be not much. You could try Bone Harvest.

No in high SR hero mobs are generally dangerous. And AoE heal is good there. Against bosses Scales are enough + avoiding hits with movement skills.

armor/physic res, the heal returned value would be not much. You could try Bone Harvest.

It is converted phys damage. Armor is not applied. Phys res on enemies is generally low and I have high phys RR.

Wooow, you have found so many enemies. You are so awesome.

That was rofl and you don’t get it, again

Why didn’t you take Soul Harvest here? Your build converts both Vitality and Elemental into Physical damage, so that’s “magical” Physical damage (one that ignores armor) multiplied by huge % weapon damage multipliers both Vire and AoM have. To me it looks like it could’ve been done so much better.

Because I went mainly for IT.

You literally have zero IT devotions on your build, mate.

I also need some survival skills so no more skillpoints for BH.

SS is a pretty poor investment here, especially with 126% casting speed. Could definitely use those points for BH, and put on Reaper’s pants.

I’m getting really tired of seeing this sniping and I expect Zantai is too. I suggest you stay out of each other’s threads, i.e. don’t comment at all. Otherwise bans will be incoming.

I will remind you

“This is a game forum and when you’re here, you are a just a gamer, everything else is irrelevant. We don’t want to know about your race, gender, sexuality, religion, political affiliation, etc or hear your thoughts on anyone else’s.”

But if you all want bans, carry on.

The behavior shown in this thread has zero place on this forum and will not be tolerated. Consider the ban the final warning.