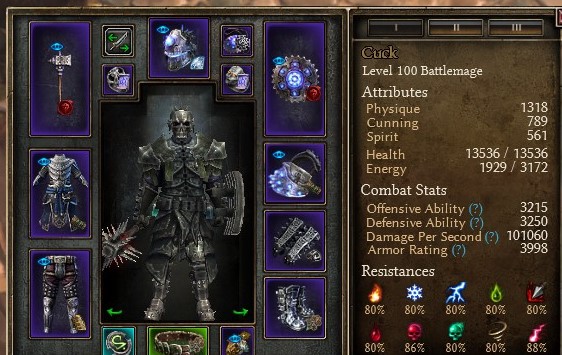 <1.1.9.0 GRIMTOOLS LINK>
Older grimtools links can be found in the update sections above.

Throwing this build out there in case anyone finds it interesting (though it’s not particularly innovative). Perhaps someone can do something nice with it. Haven’t bothered pushing SR or any of the other build benchmark things, but 75/76 boss rooms are pretty easy without much cheese (by which i mean, you can take on 2-3 bosses at a time, but not always the whole room), and celestials are pretty simple (apart from callagadra who is kite city).

Playstyle
Spin and war cry while you drop rocks on people.

Nice build. Isn’t it slow in killing? I have tried physical DW Yugol Witchblade and even with 180k DPS it was slow even for my tastes and I am no CR player. Or is Devastation doing most of the job here?

Devastation definitely does a lot here. I’d say 2/3 of the damage or more, to the extent that I’m not sure whether the damage loss due to crit from ditching reforged oleron’s belt outweighs having the acid damage unconverted without the ugdengirdle. Having higher conversion certainly helps defence-wise though (more adcth).

TIL, thanks for the info. Updated OP

Hardcapping IEE would provide a little more flat for Yugol, and the energy leech should fix your tight sustain.
I think you can afford going harder on cunning, it’s a battlemage and more than 2.9k DA feels a little overkill, and the build would remain an absolute unit of a tank.

Spinners scale more with % damage than with flat but that is on IEE as well (but not physical). It will help with the energy regen.

Hah, @tqFan’s program made it to a figure of speech!

Hardcapping IEE would provide a little more flat for Yugol, and the energy leech should fix your tight sustain.
I think you can afford going harder on cunning, it’s a battlemage and more than 2.9k DA feels a little overkill, and the build would remain an absolute unit of a tank.

Nice, really helpful suggestion. I’ve pulled points out of conversion, fabric of reality, scars of battle, and overload. Much better. Haven’t tried it without the energy components yet.

On another note, tried a few superbosses for the first time in ~800h, didn’t do any respeccing/swapping out equipment as I’m not a fan of that. Everything was tankable apart from callagadra who required kiting between bouts of circuit-breaker availability. Used the odd aether cluster:

Incredible results !
Lokarr and Crate are left and you officially beat the game

Overall the build got a little stronger I’d say. It’s even easier to farm 75-76 with the boss changes, you have to think even less. May try pushing SR a bit. Items didnt change meaninfully at all, apart from the prismatic diamond cooldown and mark of the voracious one getting more armor/block. Main changes are devotion-based. Probably want to shuffle some points out of cunning and into physique to avoid crits.

Toying with the idea of ditching the chest/helm component for a titan plating if i can get overcaps in order. May also ditch menhir’s stone-form to play around with turtle. Iunno.

Updated with a few bits:
New devo map: stag->turtle, as a pretty decent circuit breaker given all our defensive layers and the lack of high %wd stuff for leech
Re-evaluated ravager (no pharma), and did a quite dozey sr80 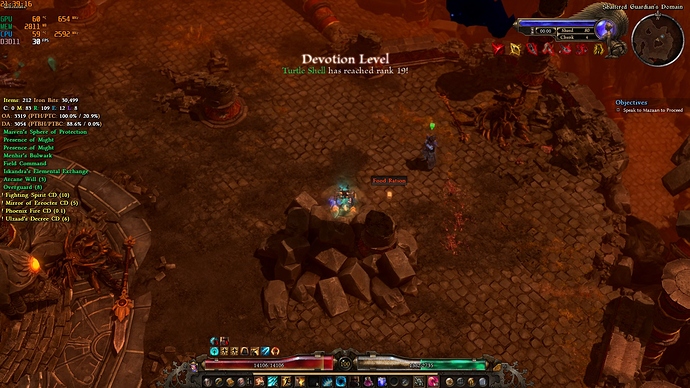