The reason behind this build is to use Chillspikes from component converted to aether. Chillspikes do pierce and cold damge so it is necessary to convert both. For pierce conversion I use two Blaze Heralds (with good rolls full conversion) and for partial cold conversion I use Magelord rings set and Soulare’s helm. Blaze Heralds, Soulare’s helm and conduit amulet give aether RR to Veil of Shadow so using Nightblade is good here (also physical resistance, OA, DA and flat pierce damage) and we can also use Blade Spirit that has also cold and pierce damage conveted to aether. As a second class I chose Necromancer because of passive aether RR, % aether damage, flat damage from Bone Harvest and ADCtH. Most of vitality damage is also converted to aether using Chains of Ygraad and Bonemonger shoulders. Build also uses almost fully converted Twing Fangs to aether. Build is fun to play. It can do SR 65-66 easily. It can do even SR 80 but it behaves like a glass cannon in it.

I have other aether caster builds here. All my builds are here. 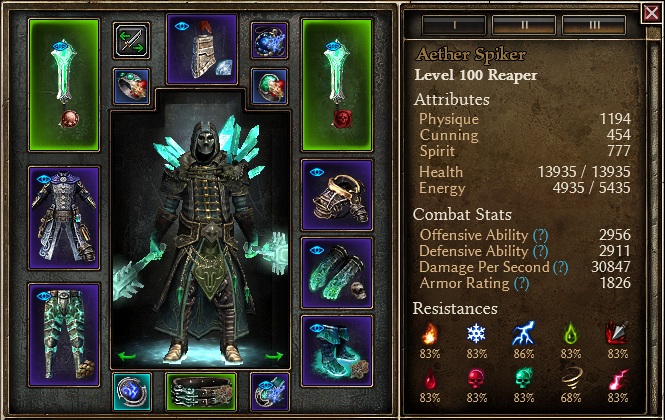 This build does SR 65-66 easily. No boss is a problem. It can even do SR 80 but performance here willl greatly depend on player skills. It behaves like a glass cannon here but you have Mark of Torment so apply it wisely and it is doable. Reaper is not that difficult.

Why Not Soulare helm? More RR plus more Ele>Aether conversion. Which your main damage skills have. %25-30 less Vit>Aether conversion won’t affect your leech that much and more damage compensates it.

Hm, it could maybe be better. I will have to try it.

Yeah it will be better. I will play it today and make new pictures and try SR 80 if it can be better now in it. Any other suggestions from anybody before I start replaying it?

I played DW Aether Melee Reaper with Blaze Herald and Marcell Scepter. First tried with Soulare+ Chest/Shoulder Bonemonger, Gloves Krieg and same boot for the stun resist. But then I realized going 4 piece Krieg + Soulare helm is better so balanced the stats over that setup but the build was still so squishy. I was getting one-shotted etc So I gaved up, but ofc that’s a melee build.

@Duchy You can also try to get Alladrah with something like this https://www.grimtools.com/calc/DV9mv0lV Since you olready capped CS the only real cost is %6 racial damage to undeads and Aetherfire proc. Siphon Souls procs it very well in AoE and even againts single target it’s ticks can proc it if the first damage don’t.

The proccing of aetherfire wasn’t great even on Aether Corruption so this might be better as well.

Great idea! I like such builds. You’ve found a really nice synergy.

Great idea! I like such builds. You’ve found a really nice synergy.

Yep I thought that too when I first had the idea of making Aether Reaper. I don’t know if my character is bugged or something(though respecd it to Fire Reaper which seems better for now) but it’s so squishy. Damage was good though. You can get more Aether RR on VoS than the Cold RR on Night’s Chill lol.

I changed the grimtools link in the main post and later I will write if the results changed or not. It should definitely not be worse.

I can look when I get home in about 2h

So I played some SR 80 runs with the changed build and it can do it if you know enemies well and dodge their heavy attacks or use MoT at right moments. It behaves like a glass cannon in it but it is doable. More life (almost 2k), flat damage absorption and more damage helped it here.

Duchy, I can not PM you but wanted to discuss a possible fun build concept

I am sure you can PM me. Other people could always PM’ed me.

ok but I can not click icon, can I send message anyway? I am forum noob so I have no idea what I am doing

So there must also be another way because people always PM’ed me.

it works now clicking on you

I also found this!

you can when typing new message select forum member