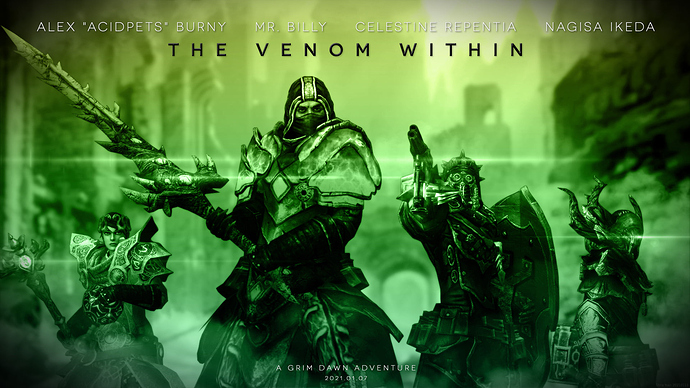 The concept of team synergies is to find ways to stack certain things in a manner that benefits the entire team, where each build brings something that stacks with the rest of the builds - A means to create something greater than any individual build could achieve.

Dreeg’s Dream Team is based around stacking regeneration, acid damage/RR and physical resist for all team members, in an attempt to make a team capable of running high SR comfortably. As this team hasn’t fully been tested yet, I cannot know the effectiveness of it. But, it seems that with the overlapping teamwide buffs each build will have 60-80% physical resist, around 8,000-10,000 hp regen, comfortably over 3k OA/DA, and HP ranging from ~20-30k, and a range of other significant benefits.

While each build is intended to be able to solo to a certain extent (at least Crucible 150), no single build will be super powerful; they are designed to rely - and greatly benefit - from teaming with each other. So, when you look at the ‘Heal Tank’ build, and you think “Hm, the retaliation damage is low and the physical resist is low”, this is because those things are intended to be boostead heavily by the rest of the team.

The builds are designed to encourage teamwork.

Between 3x Healing Rain, Apothecary’s Touch, Empyrion’s Touch, Blood of Dreeg, Word of Renewal, Combat Medic’s Mark and 2 Wendigo Totems, there will be a constant stream of healing effects for the team. The total collective +% teamwide regeneration is 288%. Each individual build typically has another +80-150% personal regen bonus.

Here are the builds, their roles, their strengths and what they bring to the team. Click on one to view the details:

Edit: Now tested! Got to SR 101 comfortably on it’s first try. The concern was when the build with lowest hp (Acid Caster Infiltrator) died, the regen bonuses and phys resist from that build weakened the next build (Two Handed Hero), who would die shortly afterward, then as all bosses would gang up on Heal-Tank without the team support, it would die. Then with noone tanking, Acid Pets would die shortly aftward. This chain reaction also occured while fighting Crate. However, I think with a few tweaks to get some more HP on Acid Caster Infiltrator, this team may be able to last longer. Killing Callagadra and Ravager was a walk in the park, it seemed like noone lost any HP throughout the fight while facetanking.

Looks like a lot of fun! This design mindset

The builds are designed to encourage teamwork

especially is really interesting to me.

FYI, the grimtools link for your infiltrator currently goes to a conjurer, perhaps a different revision of the conjurer above it(?), so you may want to check both links just in case.

The link has been updated to the Acid Infiltrator and the Two Handed Hero, thanks for bringing that to my attention

I really love the idea, i have been looking for teamcompbuilds for a while
I do have one question: how well does the tank do at holding aggro? (as i understand the threat mechanic in gd is a bit weird)
Also how does the comp fair against super-bosses?
greetings and thanks for the build

I’ve got another team build makeup coming, so keep an eye out.

The tank does quite well at holding aggro. Between War Cry and Aegis of Menhir it seems to do well.

This team wiped the floor with Callagadra and Ravager - the combined regen, phys resist and damage absorb meant that none of our hitpoints seemed to move, while facetanking. We didn’t try Moggie or Lokarr, but I think we’d do just fine against them, too.

That said, against Crate and in higher SR (101 bossroom), what we found was that the team was quite strong until one of us died. Because the team is dependent on each other, the moment one person dies it provides a lack of support which weakens the next build enough for it to die, which repeats and so on, creating a chain reaction of reduced support for all team members and inevitable death to all.

So the build needs some tweaks, and I think the main issue at the moment is the Acid Caster’s lower HP. I think if that build was tweaked to have around 20k hp, the entire team would have a better chance at finishing off crate.

Thanks for stopping by! <3