Saboteur received a lot of love in patch 1.1.8.0, getting multiple MI’s that grant a lot of conversion and synergy to Demolitionist skills that match up nicely with Nightblade’s duel-wielding capabilities. In particular, Namadea’s Horns not only grant 100% Fire to Cold conversion to Vindictive Flame, it also grants Physical resistance to Pneumatic Burst. When I saw the Ascendant Conduit grant flat reduction and good damage to Vindictive Flame, I wanted to bring these items together in a way only Saboteur could pull off.

As much as I wanted to use the new MI helmet, Rimetongue helmet is far superior due to the global Fire to Cold conversion as well as the +1 to both classes’ skills. The Helmet + Belt combine for a total of 90-95% Fire to Cold, while the Chest + Shoulders combine to over 50% Lightning to Cold conversion. Vindictive Flame - especially with the Conduit - is a huge source of passive Health regen, and Pneumatic Burst with the DW node is good in that regard as well. Combine the two and you get nearly 2,000 Health Regen as a base, and you get absurd levels when Giant’s Blood is active.

As with any build relying on passive damage to get through, this build has multiple layers of defenses to help when things get rough:

The biggest drawback to the gearing I set up for is that OA is very hard to come by. As such, I went through numerous devotion set-ups and the Grimtools I have was the best way to get as much OA as possible while still having Ultos + Ghoul + enough Physical resistance to get me by without having all four defenses fall at once.

Below is a great Crucible run with a time of 7:30. The layers are an immense help when you’re fighting multiple Nemeses at once, and having most of my experience in pet builds has shown me just how valuable passive health regen and sustain is for feeling confident against the multiple Nemesis set-up. 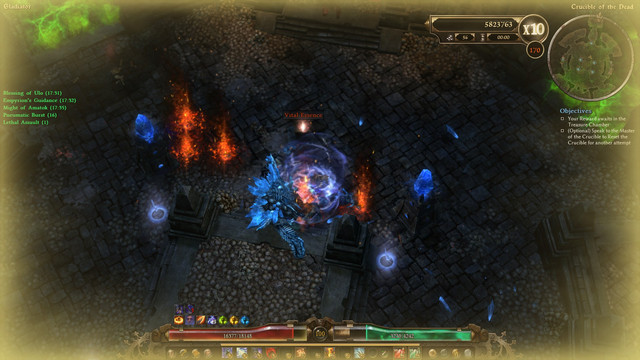 This build was what I actually wanted to showcase, but no matter how many times I went through components, skills, and devotions, it was always too glassy to handle Crucible or SR75. The theme of the build is using Chillheart to convert both Fire & Lightning damage to Cold, while using the new Galeslice Medal to convert even more Fire to Cold. All while also converting Aether to Cold using Star Pact + Anubar ring.

In terms of damage, binding nearly fully converted Arcane Currents to Canister Bomb leads to 2-3 currents easy if enough fragments hit an enemy. It’s insane how good Canister Bomb is as a proccer. I was hoping that the Cataclysm Set + Vindictive Flame would have been enough reliable damage reduction to stay alive while Trozan’s + Arcane Currents + Whirlpool handled the offensive side. The offense was great - I once got to the Boss Room in SR75 with over 10 minutes left; however, I kept losing the timer because I simply couldn’t last long enough to get reliable RR and have the shards hit them.

I’m asking for someone else to handle the reins - Cataclysm set doesn’t really see that much love, and I was hoping converting most of it and getting a truckload of Cold damage would have been enough to showcase it. Alas - it’s not enough for my tastes.