I have already created a few builds around Scion of the Screaming Veil but I have never used it for what it is intended - aether Righteous Fervor. Obvious class combo for this is Oppressor because of passive aether RR, WPS and lifesteal. I use Bonemonger set that is created for aether Oppressor. I tried to build it tanky and did not go too much into DPS but it still kills fast enemies and it is a tank. I went for larger life 17k and in devotions I went for Scales converted to aether. Build also has 27 % ADCtH. Build has two lifesaving procs - Ghoul and Serenity. SR 80 is very easy for it. I even killed Ravager in three and a half minutes with pharma.

Mark of Plagius medal with the same affixes will actually be a little better for this build than Mark of Nacrathan.

Build uses two monster infrequent items - Mark of Nacrathan and Lunal’Valgoth’s Waistguard. Affixes are for aether damage and OA. Crafting bonus on the helm is for slow resistance.

image from the game with passive buffs + Consecration 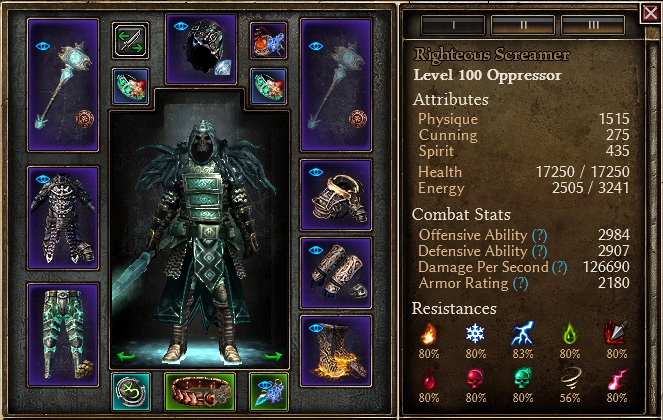 image from the game with passive buffs + Consecration, Soul Harvest and Ascension 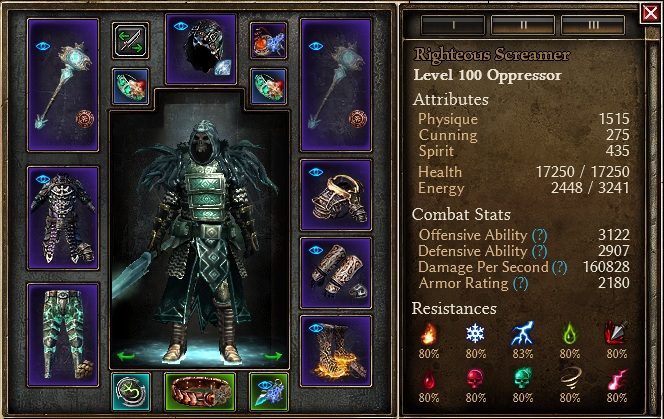 This build does SR 80 very easily. Reaper is a joke for this build. It can go a lot higher.

Was JUST talking with @Nery a few days ago and HERE IT IS!
Thanls, @Duchy, wanted a build and here I got it.

Have you tried Dreadblade medal and Magelord rings? To convert more cold from SH and other elemental sources like NE, Spear, Widow etc. It probably will improve your damage significantly and RF stays 24/26 so no big loss there but you gonna have to get resistances from somewhere else. And that medal

As I said in the text it could be done with more damage. I went for tankiness. With different medal you lose affixes. Magelord rings you lose AS (and bonus to RF) and would have to build devos differently. Reaper pants for more Soul Harvest and you lose other stuff. It surely can be built with a lot more damage, I just decided not to.

how does -% aether rr work on guardians, on codiut, you need celestial presence to apply?

how does -% aether rr work on guardians, on codiut, you need celestial presence to apply?

Yes. This is how it works for all RR to Guardians that isn’t on Celestial Presence, it always has to come from Celestial Presence. As far as I know, it’s the only skill like this where RR added to it from items is dependent on a skill node instead of the base skill.

Thanks that was my guess how it should work

Hi, can i ask a question about Ravager. On what Ravager did u test this build? Cause i gdstashed for a try your exact same build, and vs Ravager of Flesh when he fumbles me, i cannot outheal even his first phase, and i die within 20 seconds of a fight. Maybe its just Ravager of Flesh is a lot harder than other Ravagers i don’t know

Ravager of Minds and first part should be easy without any potions. I don’t know much about different Ravagers, I fight celestials very rarely.

On first try without any potions. Didn’t even use MoT. For the second half you would need them. 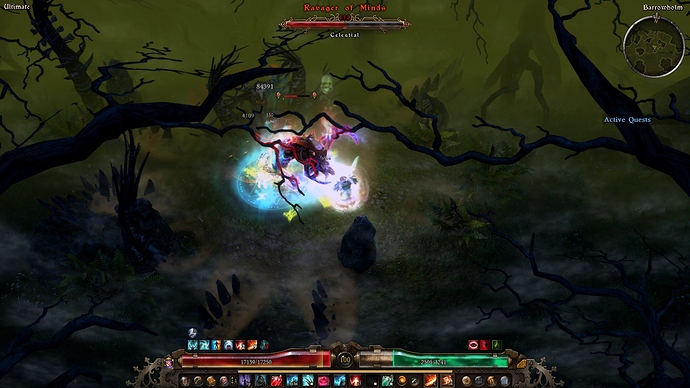 Ah okay. It seems like ravager of flesh spams ‘fumble’, and i hit like 50% of my attacks, meaning i just don’t outheal his damage

Build seems great in high SR. I was thinking too about getting Time Dilation instead of scales, and add Phoenix fire. That way i have 100% uptime on damage absorption of both sources, plus more reliable mark of torment. Following that, i would drop points in siphon souls in favour of Clarity of purpose, to maximise offensive ability from ascension.
Your build still probably would be better, it is just my suggestions(actually not mine lol)

It is possible but I don’t much like using Aeon though because you have to then be more aware of your cooldowns and manage things more. I prefer lazy playstyle