The reason behind this build is to make a build that is mostly based on Storm Box of Elgoloth. For dual elemental RR I have chosen Deceiver as a class combo for this build. Light’s Guardian set is built around SBoE so this build is built around it. It has no physical resistance and that is also why Occultist is a good choice. Other items that give bonuses to SBoE are Aetherbolt Pendant, Enslaved Wraith and Gildam Arcanum Commendation. For lifesteal Chain Lightning from component is used. For that and SBoE you need to have capped casting speed. Word of Pain is also used for RR and for devotion procs. It also has fire damage converted to lightning from Temporal Tempset. Build has huge RR of up to -153 %. It uses both Elemental Storm and Revenant for more flat RR consistency and because of other bonuses from Revenant. Build does SR 65-66 easily. It can even do SR 80 but it behaves like a glass cannon in it.

I also have other lightning casters here. All my builds are here. 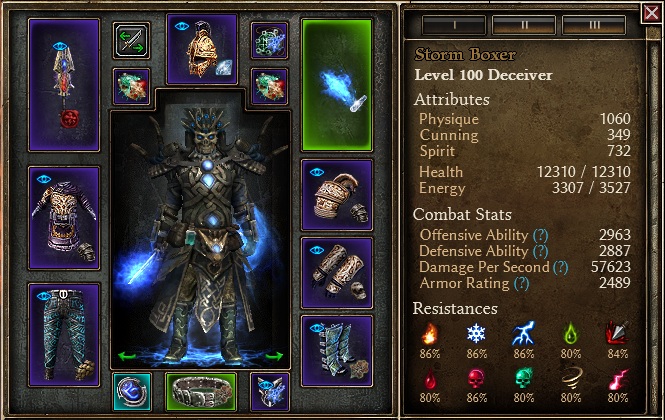 image from the game with passive buffs + Word of Renewal, Blood of Dreeg, Inquisitor Seal and Deadly Aim 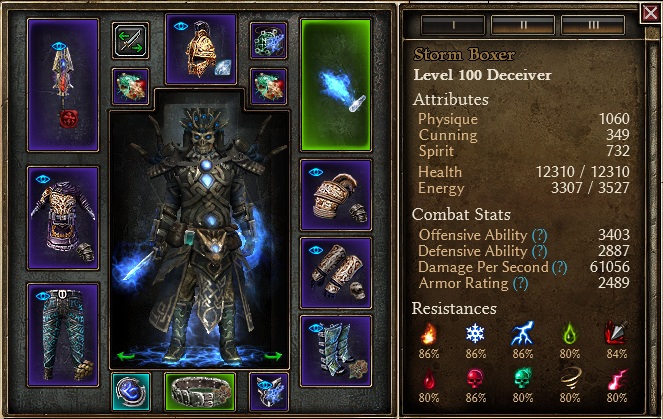 This build does SR 65-66 easily. It can even do SR 80. But it behaves like a glass cannon in it so play accordingly. Results here will greatly depend on player skills. You can always kite tough enemies with SBoE on them if necessary. Tankier version is a little safer but slower.

Great build! I had almost same idea planned but you beat me too it

Build looks more sturdy but I am not sure if not having Chain Lightning is good. You need it to lifesteal. Scales might not be enough I don’t know. And CS is only 130 %. Try it, it could be tankier. Also no disruption resist will make impossible fights with Grava in high SR.

Yeah I have chain lightning on my “possibility” list, my char is still pending so it was nice to see your post so I can make fewer mistakes

Life steal I thouht some bat and sigil also could help

Was focusing on solely on storm box as damage, so might not deal enough damage

Yeah Chain Lightning helps a lot and Reckless Tempest is great for packs of mobs.

I have added a tankier version with Scales from your build. It is a little tankier (still not a tank) but slower also. Better for high SR. It lost 32 RR from Elemental Storm that was applied almost instantly and there were a lot of them during fights. So a significant DPS loss.