The idea behind this build is from @evil_baka. He mentioned in some discussion if anybody has tried fire Vanquisher Templar with Scion of the Screaming Veil. I liked the idea immediately because I like both Templar and the weapon but building it was problematic. You need to convert fully aether damage of the weapon to fire. The Vanquisher set and green Demolitionist’s belt take care of that. You also need to have other greens in order to get enough stats but affixes on them are mostly interchangeable. Build was rather squishier with my first version so I had to redo it with more ADCtH than I am used to on skater builds and I also went more defensive in devotions. You could build this alternatively with Temporal Arcblade or Blazerush. I just wanated to do it with Scion. Base weapon damage is not as high as I am used to with 2H builds and I don’t think it can be much higer without sacrificing other stats but build kills fast. I use on the build Korvan Swiftness from rune for damage reduction to enemies also. For spamming between using Callidor’s Tempest, Vire’s Might and Korvan rune I use Stormfire skill from component. It also helps with lifeleech. It is still a bit squishier but in SR 65-66 you are totally fine but it is not suitable for high SR. Lifeleech even with high ADCtH is not great. Build is fun to play. Skating builds always are. I think that Vanquisher set should get more range on CT and more RR on both CT and VM.

There are four green items in this build. You don’t need to have two Gargabol’s rings. One is enough. Medal is craftable and belt is necessarry. Affixes are mostly interchangeable so it should not be that hard to get them. Crafting bonus on medal is to slow resistance. 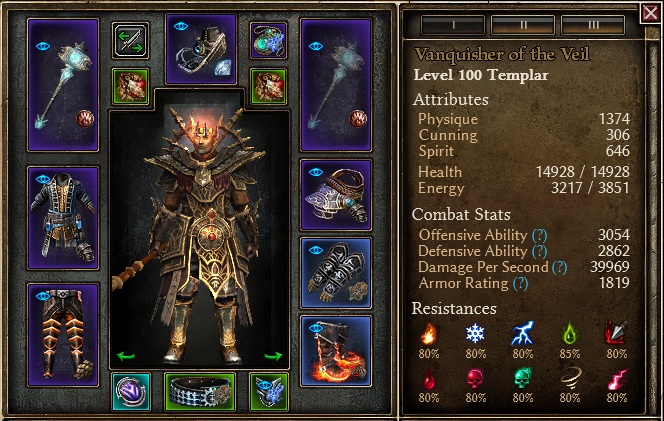 image from the game with passive buffs + Ascension and Elemental Imbalance 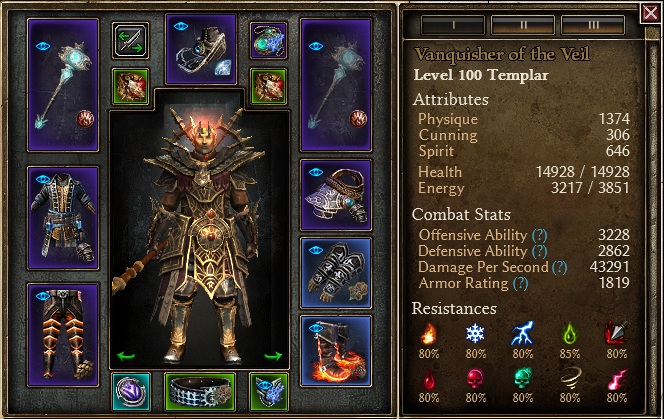 This build does SR 65-66 relatively easily. It can’t do SR 80. It is squishy in it and it can’t lifeleech enough.