With the rework of the Fleshwarped Shard in 1.1.9.0, I thought I’d redo my 2H Elemental Apostate which had much room for improvement. Basically, it’s a 2H elemental bone harvest/default attacker hybrid build that relies on inquisitor seal, mark of torment and dumb luck to stay alive. 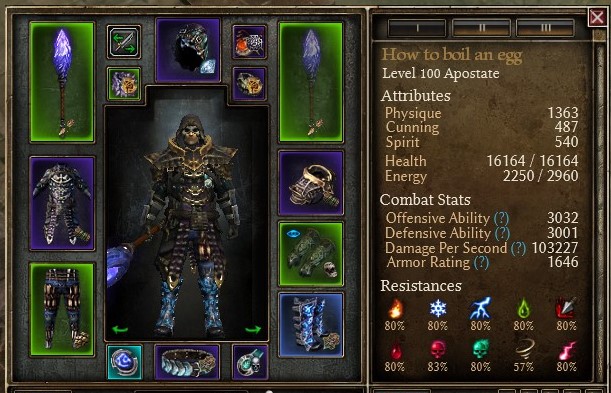 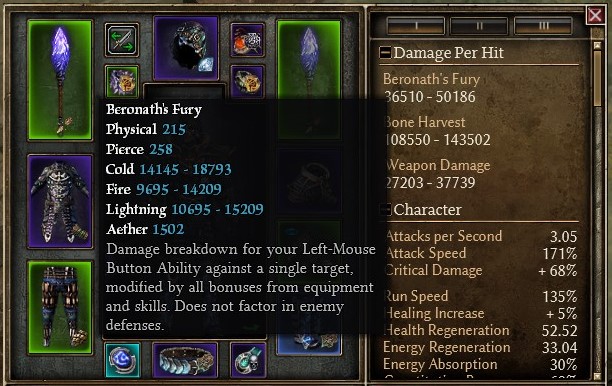 Ravager fight required the whole pharma and a stupid amount of aether crystals but hey, it worked. For Mogdrogen, I just moved points from Deadly Aim into Ill Omen and Mark of Torment and take 3 Forgefire in Jewlery for DA. Forget Calla and Crate here. Progress beyond shard 80 of the shattered realm is hazardous at best, suicidal at worst.

With optimal gear and a competent pilot, I’m confident Crucible timer can be brought below 6:00.

Conversion math
The Fleshwarped Shard grants 100% aether to elemental conversion as long as WoR is active. It also converts all the damage from Ill Omen to cold. With Incanter’s or Enchanter’s prefix and Shard of Beronath, it can also grant around 45% physical to elemental conversion (this only matters for Steel Resolve). It also has a random roll with average of 50% vitality to elemental conversion. However, Bonemonger’s helm and shoulders apply an average of 55% vitality to aether conversion, meaning vitality damage gets converted about evenly between aether and elemental. Bonemonger’s also converts the damage from inquisitor seal to aether and since we’re using Sear Souls transmuter, Siphon souls also mainly deals aether damage. Pierce damage remains unconverted.

Devotions
Kraken, Viper, Crown and Attack Seru are staple, but there’s a lot of options for the rest. I tested setups with Ghoul, Phoenix, Dryad and even Wendigo and Hyrian. In the end, I found the OA from Chariot and the damage from Blind Sage too useful to skip so I decided screw it, it’s gonna be a glass cannon build.

Conclusion
A fun and high damage build, although a bit fragile due to lack of armor and circuit breakers.

I did not expect this build to be outdated so quickly. Apparently Fleshwarped Shard got a significant rework in the new patch: 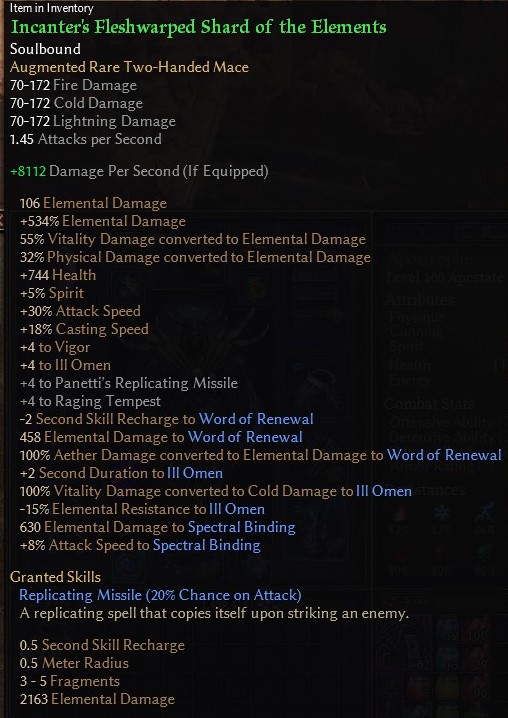 Looks like an IMMENSE buff, however devotion path should be changed to include either crown or revenant. Ugdenbog Waistguard should now probably be replaced with cord of deception and word of pain should be dropped completely and be replaced by ill omen. Will get on it eventually, however I just rerolled my apostate into another build so we’ll see!

wouldnt it be better to ditch the siphon soul transmuter so you convert the damage to elemental instead? Or you just want the extra duration?

Extra duration. Would be half elemental, half aether anyway. Laughable damage regardless.