A small disclaimer before you read this topic

This is what happens when you dig into memes too deep. Beware, poor souls! Once chosen, this road will never turn back. You were warned…

. This build was inspired by… Benn’Jahr’s Shoulderguards. Just look at them! Formidable of Readiness. 10% Physical Resistance for one item, and it is not Fateweaver’s Raiment or green shield. I wanted to make something with them. But what?

Hellfire Mine - eh, no. Doom Bolt - maybe, but not now. Also, I did not have any free Occultist by then. Flames of Ignaffar… Heh, funny

. But wait a minute! I have an Apostate, buried deep among other more successful characters and proclaimed as a failure with great class name. Why not at least try, even for a meme? Also, Necromancer has some Physical RR, so… Yeah, let us build another meme and see what it can do!

1. Grimtools link
https://www.grimtools.com/calc/4VxRg65N
This is a very Energy-hungry build, so Scales is a must-have, as well as Lantern. Sometimes it is not enough, as you will see. As usual, Azrakaa is great for Physical/Pierce casters, so the path is obvious. Not the best damage-wise, I must admit 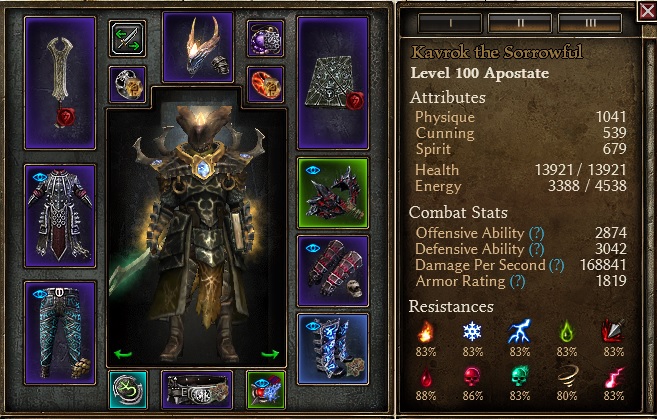 general stats, only passive and Word of Renewal buffs are active 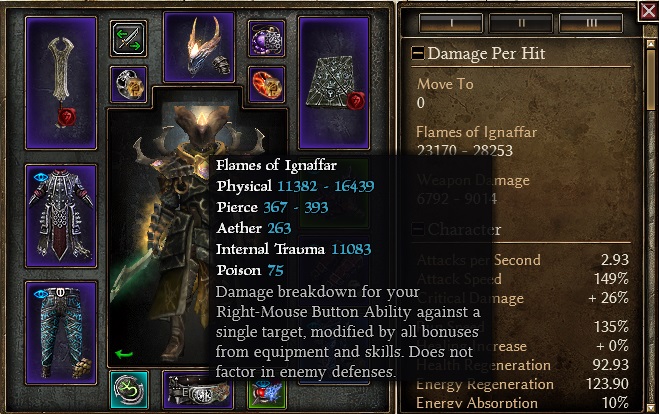 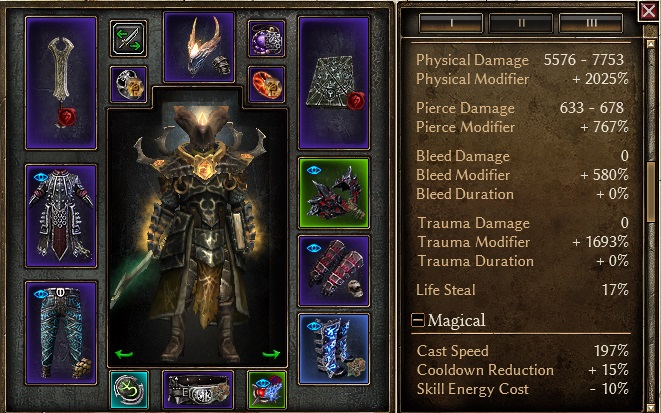 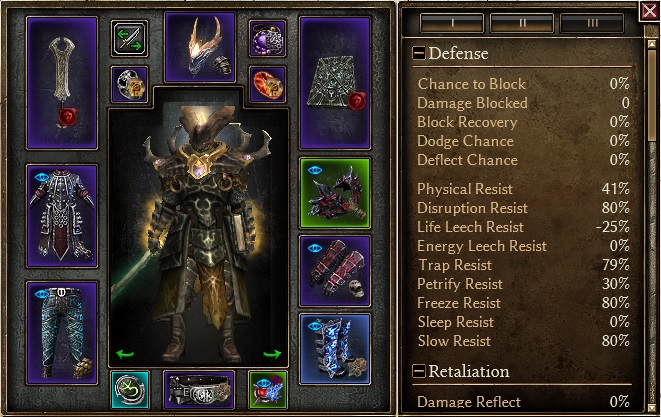 3. Gear/Build explanation
As any FoI build, it requires sturdiness and capped CC resistances, as well as full damage conversions, especially Fire (in my opinion). So, the gear choice is not so versatile as I would like it to be. Also, this particular build is very tight on Attribute points, only 2 were free which I dumped into Cunning. So, the gear:

About Resistance Reduction. Total amount is ~132% (-10% from Matriarch ring, -8% from Combustion ring, -20% from offhand, -15% from modified Storm Box, -27% from Spectral Wrath modifier (when hit), -32% from Assassin constellation and flat 20 from Scales constellation (when hit)). Nice

. If only we had more %Physical Damage to utilize it fully…

4. Gameplay
Cast Storm Box of Elgoloth on the thickest enemy, Inquisitor Seal under yourself (or enemy) for tankiness and “incinerate” everything with FoI. Be careful with Ill Omen, fleeing monsters can be multiplied in geometric progression (SR is dangerous because of that annoying mechanic). Uptime Word, Wendigo’s Rush for battlefield relocations, Mark of Torment for dangerous situations - usual stuff. Have a bunch of Energy potions as well and do not shy from getting some rest

Lokarr (somehow any Energy Leech did not work on him, why?

Is it a bug or something?)

). Potions are shown in the video below.

I had some fun with this build for sure

. Not very strong but it is a meme, so do not expect much. Feel free to share your ideas/critique/overall feedback about build idea.

Thank you for attention!

Reserved because I can

Looks pretty good for what it is, about what I’d expect

https://www.grimtools.com/calc/DV9Elj6V is what I came up with a few weeks ago which works off of stacking as much converted Physical damage as possible and putting it out through Ignaffar. In total, it achieves 100% Elemental, Pierce, Aether, Vitality->Physical. There isn’t enough Physique to equip the chest (even with the Spirit bonus on Dryad freeing up points, hence why I took it) so some Smith crafts have to go to +% Physique or hope for a high roll on the relic or both. On paper, i also don’t know if the high weapon damage and 26% ADCtH is enough without Bloodsworn Sigil’s baked in 4%.

It can work due to much bigger Physical Damage, flat and percentage. Dryad proc also helps, yes. From survivability point it is more or less on the same level (or even bigger). Bone Harvest casting is a bit awkward, but this is the matter of personal taste. Low %Casting Speed can be a serious problem though (especially with -20% CS mutator, the difference is drastic). And Tome of Names proc is too good to ignore, in my opinion.

These are my thoughts, without testing. The results may be different on practice.