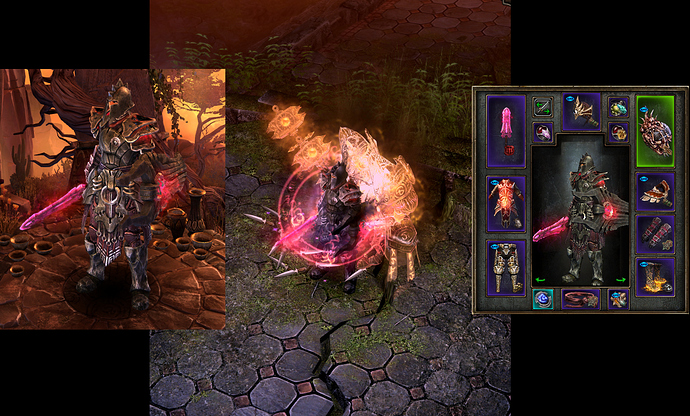 So I’d been wanting to make an Ember’s Calling Vindictive Flame build for a while. I’d made a few previous attempts that didn’t really feel like anything special. I also wanted to make a chaos damage oathkeeper. Again, I tried a few that didn’t feel right.

Finally, I have a Chaos Ember’s Calling Shieldbreaker, and it’s really fun

This is a good AOE damage sword and board warrior. It is not a tank, and should not be played as one. Rather, this build should be constantly in motion, picking fights constantly, deploying RR and choosing targets to focus on in brief skirmishes.

This build has 100% fire to chaos damage conversion.

I calculated that the build can probably deal Vinctive Flame+Ulzuin’s Wrath critical hits of up to around 240k damage. The max hit this build has achieved is 233k, and I believe this is from Vindictive Flame+Ulzuin’s. With this skill hitting multiple targets in a wide arc multiple times per second, the build is very good at fighting groups of enemies at a time.

Because of the fairly wide AOE of the build, so long as you’re fighting ‘near’ enemies, they will be taking significant damage per second. This allows the build to be mobile. Staying mobile allows you to dodge attacks, prevent building up floor AOEs underneath you and so on - All important things to consider when lacking persistent damage absorption and HP.

It’s low weapon damage concerned me, but it turned out to be no problem at all, with the build constantly critically hitting with Righteous Fervor (plus Smite or Shattering Smash) for 100k+ damage. Righteous Fervor really just serves to complement the other damage from this character. It triggers Flame Spout, which adds to the nearby AOE damage.

Below is a video of the build through SR75 from near the start of Shard 2. 75 was finished with 10:32 still on the clock (no deaths). The AOE nature of this build makes it quite beneficial to fight lots of trash mobs at a time - With 15% lifesteal on Vindictive Flame and Ulzuin’s Wrath, the more enemies nearby, the more you get to heal

Around 0:30s in , you can see Benn’jahr trying to get to me, but to no avail. It was no trouble just avoiding his attacks and focusing down the smaller enemies so as to move onto the next shard. In the boss room I accidentally pull both Korvaak and Valdaran, but by staying mobile the fight is still relatively easy, if not a little slow.

To help lower incoming damage, this build has Ascension for some damage absorption, high DA (3300 to 3500 depending on buffs), and Flashbang to add 25% chance of fumble/impaired aim. A low ranking Blast Shield procs if need be for additional damage absorption, and if Blast Shield and Resilience proc, you get a temporary +7% max all resistances boost, raising your basic resists to 90%. All of these strongly contribute to a build that otherwise looks potentially squishy on paper (due to lowish HP and no % damage absorption). 28% reduced enemy’s damage on Ulzuin’s Wrath also helps with survivability a lot, of course, and being able to fully heal with every proc of Vindictive Flame (against most enemies who aren’t too lifesteal resistant) helps a lot as well, of course

Again, constant mobility reduces chances of having spike damage wreck you in between Vindictive Flame procs.

This is a really fun, fairly tanky sword ‘n’ board. It is not uber in it’s survivability nor is it wth-amazing damage, but if you enjoy that mobile melee playstyle, check it out.