(aether is in a good position for this, not all damage types are) 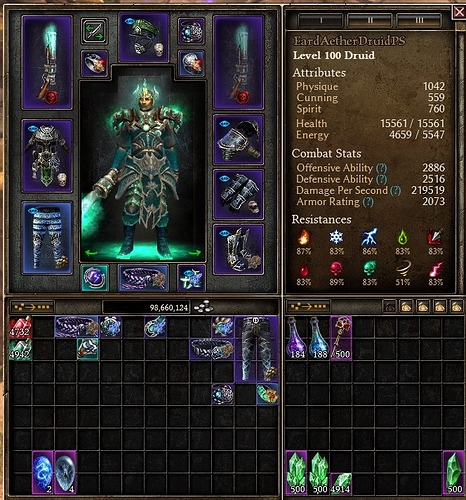 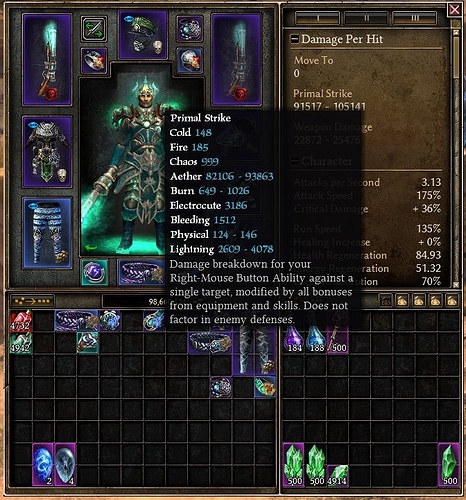 This was originally an aether savagery doodle from a few patches ago. Wasn’t great, even with some veilkeeper pieces added in, as it hit a brick wall on aether resistant non-aetherial targets. Figured I’d try aether primal strike instead, and hey, actually works! Nothing really creative here, I just assumed no RR approach wouldn’t work, but stacking all the racial and damage pushes it over. This isn’t as good as the light show but for people who hate wind devils you only have to push 2 buttons now.

Gear! [note, 3 crafts to balance across physique to wear krieg armor and stun res. Depending on your rolls this could be 1 or 2 physique. In game I currently have worst case scenario 3 physique, but 75-76 is still plenty survivable with 51% stun res. If you roll poorly, devo tree can be adjusted to pickup hawk and cunning points to physique]

Helm, Chest, Shoulders, Gloves, Boots: Krieg set! Stack aether damage and more flat on reckless and RR on reckless and massage it through primal strike spam. Doesn’t work without these bonuses so hopefully those stinky spellbinders don’t get the flat damage nerfed

Pants: Astral Legwraps. Tailor made for this with reckless, primal Strike skills. Boring stats otherwise but we need the points.

Relic: Agrivix’s Malice. Proc is nice for stuff that walks behind the PS arc. Haunt is a potential here but the speed, racial, damage and proc I assume overtake it.

Belt: Arcanoweave. +1 all, boring stats. Other option would be chains of ygraad but I didn’t want to lose shaman skill points and we don’t get a ton here from vit conversion. Bat not needed, so just some flat on totem

Medal: Other slot with some options. Using Mark of the Dreadblade currently for speed, flat, and more fabric points. Mark of Anathema is also an option for more racial, or sneaky option of Beast Slayer’s Mark which gets converted flat and big anti-Reaper racial. Haven’t tried the alt options here yet

Rings: Band of Eternal Haunt because we need that RR proc something awful. Second ring is Astral Ruminations for PS points and attack speed. Haven’t tested if something like Tawrot or or Veilwarden band overtakes the 2 PS points, or even magelord band to convert torrent.

Devotions: Relatively standard northern aether map approach. Spear and Korvaak for T3 and both Wraith and Toad for anti-Reaper racial damage. Haven’t felt any need for ghoul in SR75-76 as deaths are only from playing extremely stupid, although with uncapped attack speed ghoul would be a dps boost if one wanted it. I’ve found aether corruption on Widow procs mines consistently enough even on single target, while PS on korvaak keeps that spamming at cooldown.

Skills: Nothing unique, max PS line even if some of the bonuses are not overly converted, then all support skills. Without needing wind devils there are plenty of points to throw around.

Gameplay: Super laid back. Approach pack, cast corruption, shoot. Line up groups of targets, and remember to recast corruption occasionally. If it’s a big pack or nemesis, drop wendigo totem at start. Mirror if something goes wrong but you don’t need it very often. Everything outside of Grava can be facetanked. Grava just kite backwards to stay out of impaired aim/disruption pool and he’ll die after a single disruption ball cycle. Kuba kinda sucks and sometimes I’ve died trying to kite away from his constant pool spam so it’s easier to just facetank and deal with the damage loss debuff. Reaper can be facetanked but is your slowest target. Helps if you can pull him with trash or another target on boss wave to get some good PS chaining.

Obviously this is pretty heavily impacted by aethermarked attack speed down and aetherwarped +res with slower run times. I’ve run with both and can still complete 75-76 without deaths.

Crucible: Just under 5 from @romanN1 despite triple reaper engagements.

Would be so much better if it was HC

When you really don’t want to use Wind Devil

When you really don’t want to use Wind Devil

Nice! I was hoping to see PS green version.

Last time @Valinov tested torrent had some weird mechanics on passthrough PS and wasn’t worth going above 4-5 targets.

What triggered the change? In this build you have enough skill points floating around to basically get everything, but The Light Show has a number of alternative places to spend points (albeit mostly defensive softcaps).

Ended up being a damage gain after testing, even if passthrough torrent doesn’t trigger a bunch of attacks due to hidden internal cooldown. I should test 1 pointing torrent here but as you mention it’s already an embarrassment of skillpoints without a home!

Cool, that’s kinda what I figured you’d say— it’s not like the per-target Torrent numbers aren’t going up with further investment. Idk when I might get around to making another Druid, but in my case, I’m probably more interested in the difference between low and high torrent investment on The Light Show just because (as a matter of taste) I’m inclined to try trading Torrent damage for a little defensive bump if the damage dropoff is small enough.

No deaths til boss room, then 2 on sharzul figuring out when I needed to dodge and one on benji because I thought I was only going to eat one crystal. Apparently a crystal eating day! No reaper fight but Grava still doable, and Kaisan in shards sped up with trash pulling. Definitely not ideal trying with aetherwarped in SR85 but hey

I’m probably more interested in the difference between low and high torrent investment on The Light Show just because (as a matter of taste) I’m inclined to try trading Torrent damage for a little defensive bump if the damage dropoff is small enough.

After running this SR85 on aether went back to light show. Had not ideal mutators on SR75 but it does feel too flimsy now, the swap to reckless tempest was max damage approach but 22XX DA starts to get dicey in SR75. Non-starter by SR85, I almost got fully crit to death by some rando white mob

. I’m going to revisit for 1.1.9.1 and find a slightly more balanced approach again

This is an amazing build! im having so much fun with it,
Ty for this)