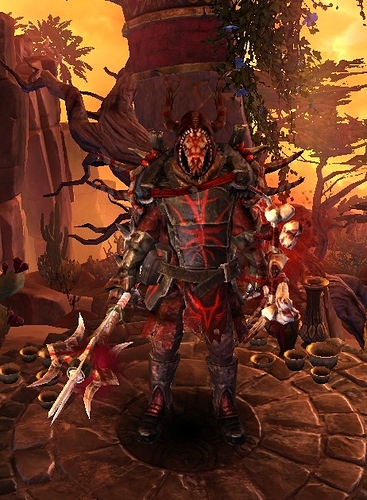 For people who wants more blood…

I actually made this build as experience so I can give feedback on bleeding side of the Blood Knight set and various other vitality/bleeding items such as Howl of the Wendigo, Crimson Spike, Bloodrender, Ravager’s Bite so people can build around those like DW melee vitaliy/bleeding trickster, reaper, warder, death knight or ritualist. For now this build will be worse with Death Knight, weird with Ritualist since why not use bloodrager? I also tried to make WH and Trickster but again things got real tricky. But having alternatives and creativity, that’s why we are playing this game. Thanks devs for their unlimited support to the GD.

PS: Helmet and Medal crafted with armor, Weapon with %physical. Better to have all in physique for some more cunning investment. 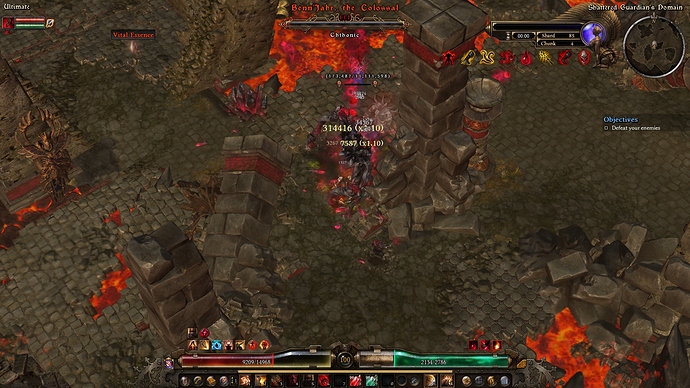 It’s ‘‘ish’’ because you do hardly. Even on this single shard run extra bleeding resist; I died a few times. And while progressing to 85 I maybe died like 20-25 times so 85 possible with sheer dedication. Higher? Doubt it. It’s okay at 75-76, not the fastest nor the safest but it becomes easy when you learn what build can do and can’t.

It’s a fun build surprisingly, it’s like my second S&B build, but first one was existed a brief moment 2200 hours or something ago

It’s also my first bleeding build! so I’m sure it can me improved but it has the limit of ‘‘One-hand Blade Arc’’. As I said if this build was Death Knight, it would hardly do 75-76. I benefit the extra RR and damage from Shaman side.

And add some Weapon Damage to Counter Stike. Maybe some Bleeding Damage to Bone Harvest, since there are items that supports the concept but I’ll make a seperate thread for all of these.

At last Bleeding part of Blood Knight set was noticed.

I have this Death Knight https://www.grimtools.com/calc/p25a8no2. It can do SR 75, even 80, but with some accuracy (in my case, with at least one death per run

, I am so reckless). Not the strongest build, but fun nonetheless. It would be nice indeed to give the set some Bleeding to Bone Harvest.

Thanks; yes I thought about Guillotine with DK aswell but the bummer is you can only convert %35 of the physical into vitality so spam BA wasn’t a choice and BH have no bleeding damage. Plus transmuter wastes the base physical damage of the weapon. I thought using both howl of the wendigo and ravager’s bite for CD BA+Cadence spam but not enough skill points.

So vitality/bleed DK is not satisfying at the moment and for Warder, there is a far better choice… Bloodrager…

Good to see dual damage used here - that’s all I’ve been playing for the past year.

Vitality/Bleeding DK is fun and damage isn’t bad, I just wish there was some Bleeding Damage added to BH from the Blood Knight set and Blug’rug’s Plagued Edge should get a Bleeding Damage modifier to Harbinger of Souls as well.

I went DK over Warder solely for thematic reasons.

First one is what I tried but failed. Second is better with complete vitality focus as my build. But I already suggested Edge of Death should have bleed support instead of physical/trauma in the Edge of Death thread.

And yes some bleeding modifier on Blugrug’s Plaqued Edge would be great.

Nice job, and good to see some S+B attempts with a skill that almost exclusively sees 2H.

I wonder if the transmuter should be changed from its current state to a better spam 1H boost? I can’t recall a time where I’ve seen or wanted the transmuter in use. I think it is supposed focus less on the %wpn damage of 2H and more on the skills invested - for a big bleed/IT dot - but it doesn’t seem to do that well with the significant investment numbers and extended cd.

Now that you are all fired up about bleed and felt how BA suffers with 1H, perhaps you can experiment with S+B bleed Baldirs (VM+Judgment focus?).

Do I have to use Baldir set?