Hello and welcome to my new crazy build topic!

Today we talk about another build that is somewhat supported by gear, albeit not directly. It is centered around… Drain Essence turned to Chaos!

I know, sounds like “Why on Earth would someone do this? Is it some kind of a joke?”. I wish it was

. But this item Mythical Cloth of Unspeakable Invocation - Items - Grim Dawn Item Database says otherwise. An arrogant challenger indeed. As if Crate said: “Come on, try building Chaos DE. You will never succeed!”. Devs did not know one thing though… I like building stupid stuff

. And here are my results. Behold!

Overall Drain Essence is a pretty weak skill that is decent only for some dedicated sets (Uroboruuk, Chillwhisper etc.). It needs so much Chaos power. And Energy sustain. This is why I used my most despicable building method - “all-in-damage” (no offense to fellow builders that use similar approaches). Spirit dump, aggressive devotions (Dying God + Abomination). I look at this and ask myself: “So, how to play this? Dying every second?”. The truth is - the build still is playable and even does not break like glass from any decent hit. I do not want to say that it is immortal. But it is manageable to play. 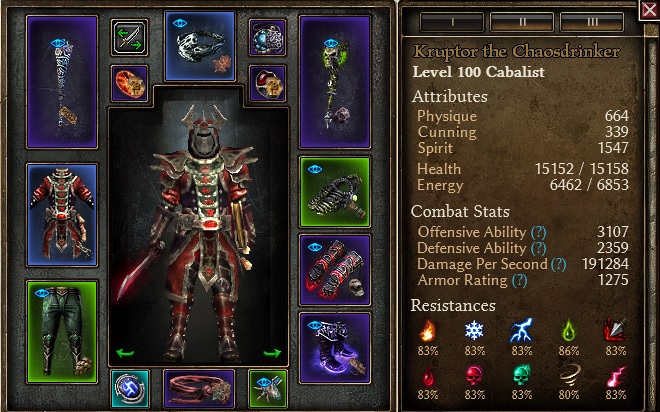 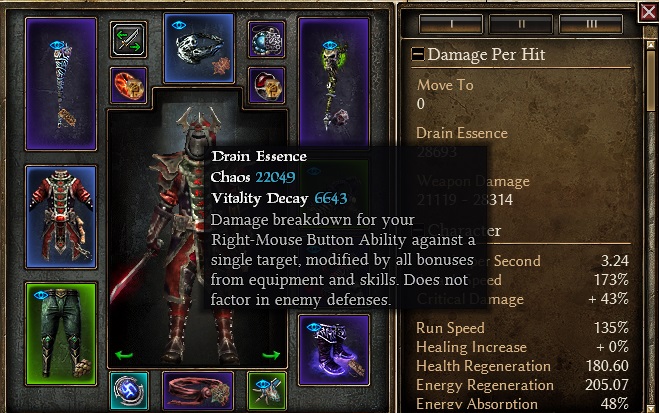 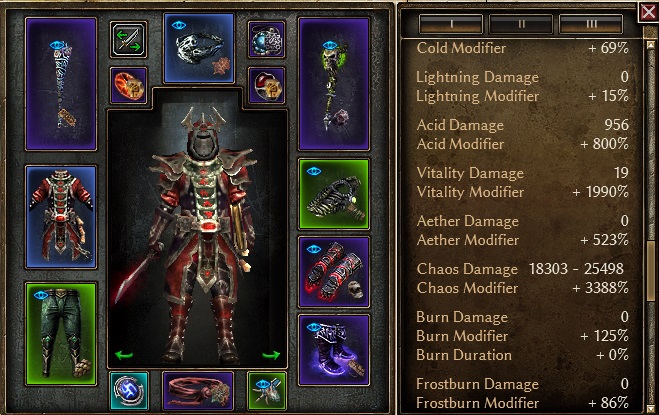 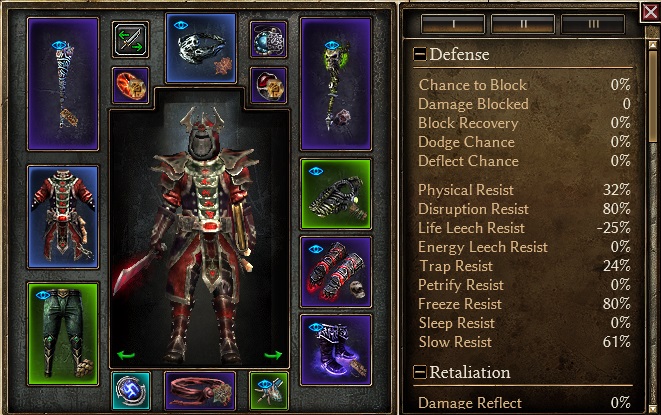 3. Gear/Build explanation.
The gear I have chosen provides necessary conversions to make our DE chaotic, as well as skillpoints.

About Resistance Reduction. Total amount is ~92% (-15% from modified Ill Omen, -10% from Voidheart proc, -8% from Combustion Band proc, -35% from Solael’s Witchblade constellation and flat 24 from Revenant constellation). For Chaos Damage type it is somewhat okay, I wish it could be better

. Reaper and Benn are tough but doable, Fabius hurts much so be careful. Overall heay melee fighters are dangerous for us, do not try to be a hero and catch all punches at once

4. Gameplay.
Always debuff enemies with Bloody Pox and Ill Omen to reduce their Damage output (and OA from Pox) as well as increase yours. Throw Sigils under enemies’ feet for some bit of healing and siphon their vital energy with DE. Uptime Blood of Dreeg, it heals you when leeching is not enough/possible. Empower yourselves with Hungering Void through Solael’s Flame when needed. And, as usual, Mark of Torment for dire situations, Displacement for battlefield movement.

5. Videos.
Avatar of Mogdrogen (potions are in the video, no Aether Clusters. First time I perished while drinking buff pots 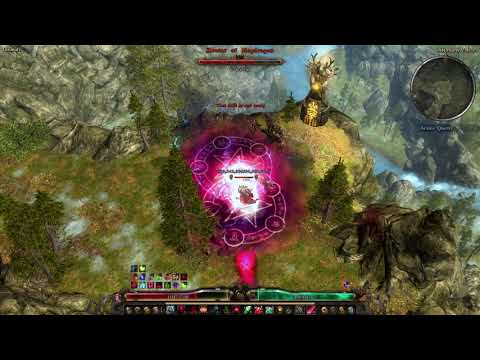 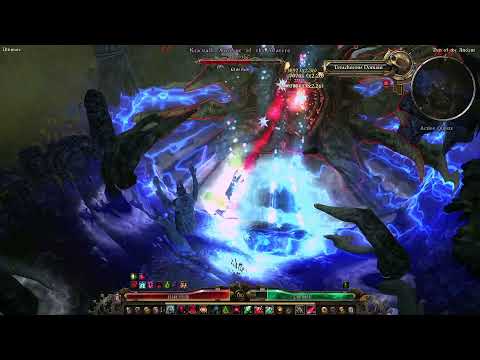 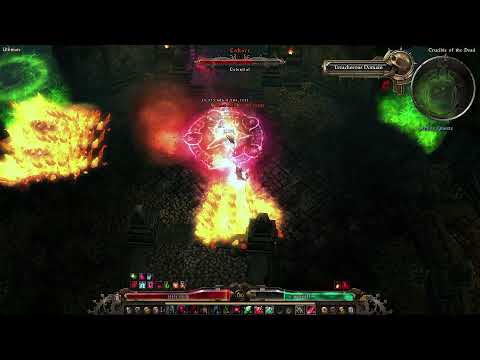 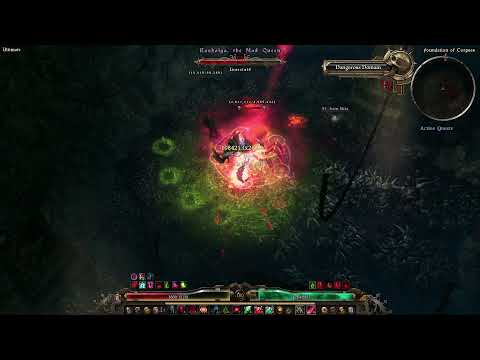 Morgoneth (sometimes can be pretty tough). 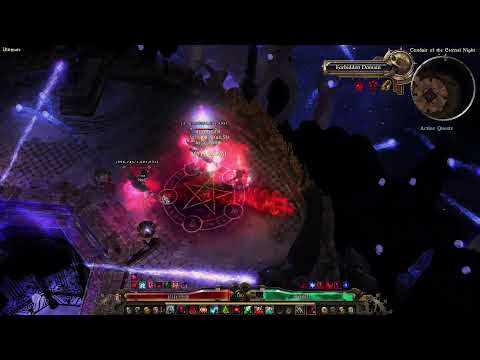 . I did not try 75+ SR, have some doubts about build’s survivability there). 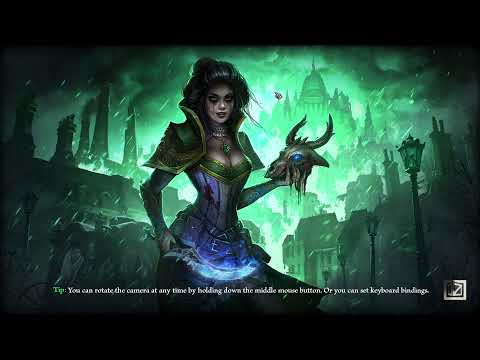 Conclusions? It is tough, but doable for some “basic” content

. At least I beat Mogdrogen with it, it is something. Hope you had some fun reading this topic

. Any feedback is welcome, of course.

Cool idea and seems to be optimized perfectly. I really like it.

Helmet . Wreath of Souls. +1 to All Skills, %Chaos Damage, conversion is not that bad since it applies only to small part of auxiliary skills and devotion procs. Ravager’s Dreadgaze or even Fettan Mask are alternatives.

I think the conversion actually improves your damage a tiny bit since you have 3 times more %Vit than %Fire (3k vs 1k).

(Chaos RE is garbage, sorry, I tried that setup too

(it beats RE in terms of damage and defense, because such build desperately needs to CC enemies)

If you build specifically around it - then yes, maybe Chaos RE is possible. Not for my build. I used Soulcatcher instead of Conduit and it was horrible. Less Chaos RR, more points for RE required, by itself Earth for Damage reduction is not great since it has some activation time and not spreadable. So, more RR and confuse/spreadable effect of Ill Omen is definitely better. And trading Spark of Reality for Bonespike or Pandemic is unacceptable, we need conversion.

So the build is technically the same. Just healthier. Performs as usual.