A lot of my build’s inspiration came from @MergosWetNurse Pyran’s Health Regen Sorceress - a really nice build showcasing how powerful this set can get through focusing on a combination of hard-hitting Mortars and healing devotions. In my case, I wanted to focus on the new Shaman Conduit that gives us Fire Storm Totems, and combining it with the set felt natural as it’s one of the few good items that converts Lightning to Fire.

There are a few items that give points to Fire damage and Storm Totem - specifically the boots. I wanted to get up to 25/16 by using a Quickening Gem, but a lack of damage output was immediately apparent. It was well worth it for me to go for another 100% or so fire by picking a Fire ring, and the proc on the Ice and Fire ring goes so well with the AoE coming from Mortars, Totems, and partly converted Cindertouch winds.

Like Mergo’s Sorceress, I wanted to combine Healing and damage, but trying to go with Light’s Empiryon neutered my damage too much. Instead, I went with the combination of Healing Wind, Magi, and Korvaak. Healing Wind has the additional benefit that Energy management is never an issue, and Korvaak’s Petrify is amazing for rooting monsters in place to soak up the additional damage. 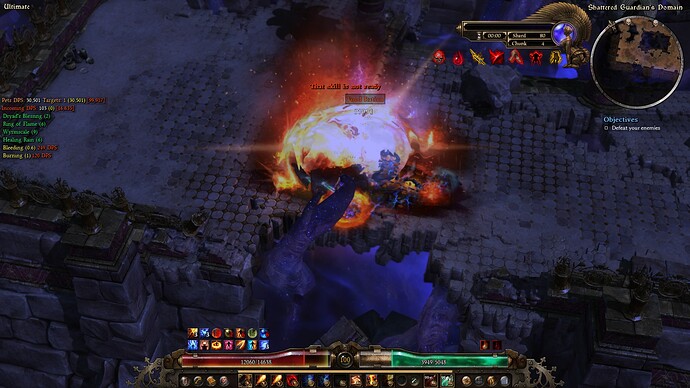 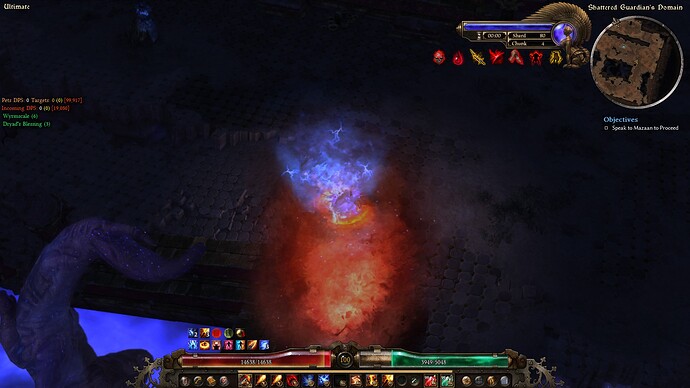 Iron Maiden is absolutely the build’s “Nemesis” as her Internal Trauma chunks can go as high as 2K, and her Blitz is especially deadly when you’re trying to kite her. I died once to her in SR75-76 (ruining the timer, but I’ve had enough experience fighting her that the second time was much better), but holy Gods of fire, SR80 is another animal. Check out the mutators: Elemental Resist, Brutal, Monster Offensive Ability, I was ready to throw my controller out against that.

But I somehow persevered (with a LOT of deaths) and was able to beat both Iron Maiden and Fabius (the other image). SR80 is much easier with normal mutators, but to beat Iron Maiden with that combination is enough for me to consider it a viable build, even if I died a ton figuring out both her and Fabius’ attack patterns to avoid the worst of the damage.

SR75-76 is much easier, but do beware of Maiden. She’s easier if you have a kiting circle where you’re just away enough that she won’t use her Blitz, but not close enough that she’s hammering you with Cadence. Natural Regen will carry the day for you, and potions will help tremendously when she hits you with Forcewave or a similar move. Grava - by comparison - is simply a nuisance, as I took him out without dying even with those awful mutators.

People being inspired by my builds?!