Just thought I’d share a little build I made: my Vindicator. I made A LOT of builds back in 2020 during lockdown (when I had time on my hands), some good, some not so good, and this was one I left unfinished until very recently.

I was quite excited about this build because it’s a pure elementalist which uses the granted skill Obliteration given by Mythical Tome of the Arcane Wastes. The advantage of this is that you get a main skill for 0 skill points (freeing them up to use elsewhere) and that juicy -35 target’s resistances.

It has been my intention to make a build based around every damage type, and so this is my attempt at Elemental (which, as we all know, is a combination of Fire, Cold, Lightning). It turned out pretty good, and I don’t think there’s any build quite like it right now, so thought I’d share. 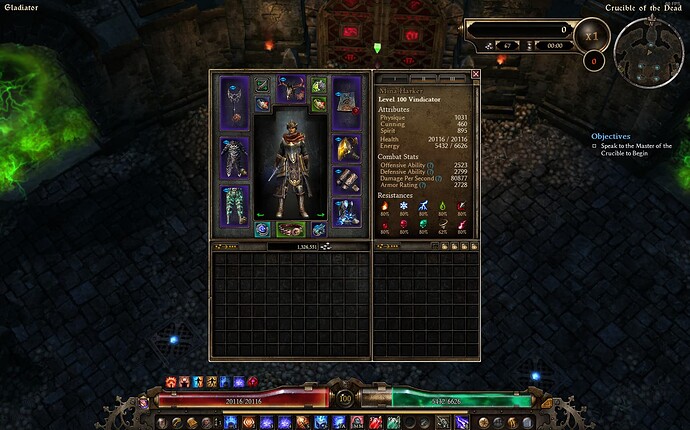 As you can see, the main right-click attack is Obliteration, but in reality this is only part of the damage dealing. I also use over-maxed Storm Box of Elgoloth which is especially useful for the DA shred, and of course Wind Devil for its damage-dealing and resistance shred.

One of the main attractions is the combination of two defensive skills: Inquisitor Seal and Wendigo Totem. Together, they form a powerful haven which few enemies can break down. The totem provides over 5k healing per second. The only problem, obviously, is when kiting is absolutely necessary. However, Twin Fangs & Giant’s Blood generally provides enough sustain (as well as heal from Potions/Word of Renewal) for when you are forced to move around.

GAMEPLAY
The build has been incredibly fun to put together and play. It’s actually quite simple: I use AutoHotkey program to simplify the hotkeys I use, which means I use the following commands:

The rest should be pretty self-explanatory! (Note that I always have potions bound to Mouse Buttons 4 & 5 for easy access)

I’ve been able to run SR to 76 very easily with this build and also completed Crucible Gladiator 150-70 on the first attempt. Crucible was not easy though, because it took a lot of kiting outside of my Seal/Totem Protection. I might attempt other bosses like Ravager in the future (I’ve only killed him on my Warlord), but for now I’m pleased it has passed both these tests without too much trouble!

Thank you for reading

Thank you for the nice build

Let me ask you a question
You could also get Rowan’s crown
You think it’s enough to reduce tolerance, and you chose bat or lotus viability, so is it right?

You don’t need Rowan’s Crown RR if you’ve got the 35 reduced resistances from Obliteration!

I’ve actually swapped her out by changing her into ranged lightning savagery. It was a fun build, but it lacked reliable life steal and a panic button/circuitbreaker like Mirror. Comparing her to my lightning Druid, who has better ADCTH (Chain Lightning), Ghoul, Giant’s Blood, and Mirror on quick cooldowns, it is no contest.

The major weakness of Vindicator, as I’ve pointed out, is that it lacks a panic button/circuit breaker (e.g. Mirror, Blast Shield, Blade Barrier etc). Therefore I play this class by stealing and healing enough life as possible.

This new setup is also the 2nd character I’ve managed to beat Ravager with, after my Warlord. I got impatient and actually fought him before I’d maxed out all my new devotional skills, but managed to beat him

I’ll probably do a write up of this new version ASAP.

As for the elemental caster, I’m sad to give it up, and hopefully I’ll find a way to build another with this damage type.

Thank you for your quick reply‼️
I’m a 1 month beginner in Grim Dawn.
I chose Vindicator as my first character, so I have an attachment.

I saw your cool elemental build and wanted to use it very much.
I’m sad to hear that you had to give up too.
But the new build is also attractive and easy for me as a beginner.
I’m looking forward to your next post‼️