My Infiltrator was originally a pierce runecaster which became a cold runecaster, and then back to pierce damage, but with Phantasmal Blades (PB). The cold runecaster was pretty good, but I knew he could be better… 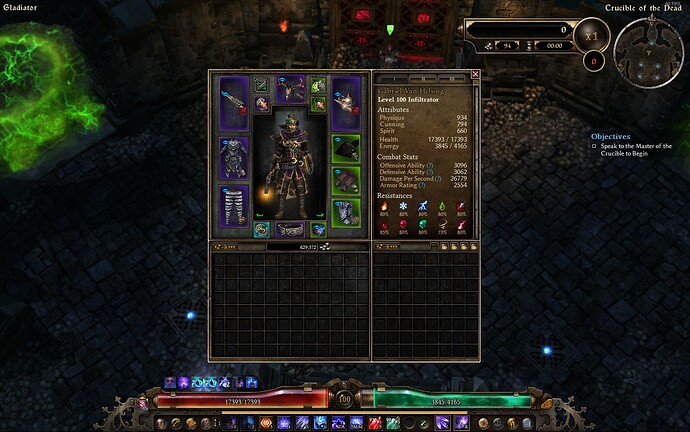 Image shows my build with permanent buffs, but outside of Inquisitor Seal, Deadly Aim, Inspiration and Dryad.

The build is built around the off-hand item, Mythical Jarinthor’s Head, which converts all the vitality damage on the Heart Seeker part of PB skill to pierce, plus gives additional cold to pierce and chaos to pierce conversion for the Nether Edge part of the skill.

I’ve opted to use Storm Box as a proc for Living Shadow and it works quite well, and has the advantage of added DA shred, which stacks with the other sources from my Amulet (Seal of Annihilation) and Medal (-50 added to Word of Pain from medal). The only downside here is casting Horn/Storm Box/Word of Pain does break up the flow of my PB casting a little bit.

The sheet DPS is quite low, but note that this is calculated for ONE blade of PB, and there are SIX blades.

This is by far the best iteration of this class I have played. As mentioned, I had both pierce runecaster which became obsolete with the newer patches, and a cold runecaster. The former was excellent on paper but was a bit fragile, and the latter’s Rune of Hagarrard packed a big punch, but his OA/DA stats weren’t top notch and I just knew he wouldn’t be able to face Ravager, since he didn’t get any physical resistance from either class. I’ve realized that the best builds to face him obtain some from at least one of their classes (e.g. Aura of Conviction, Blood of Dreeg, Dual Blades, etc).

One of the benefits of this build is that the Devotion setup is quite flexible. I had spare points after completing the Order/Ascendent devotions on the right side of the map, and have taken Jackal/Wendigo over on the left, for additional cast speed and physical resistance. However one could also take Ghoul or Bat for further sustain.

I originally planned to have Bat, but sustain is still great w/o it, and I’d probably have to attach it to Word of Pain if I took it, which only can proc once per second. Dryad really is a must, as it reduces spirit requirement for our off-hand.

The performance has been excellent so far. This build can run SR 75/76 comfortably and also completes CR150-170 without too much trouble. He really is quite safe in Crucible, and I run it naked with just a few consumables - I’ll always use Elixir of the Aether to get that cast speed up to 198%.

I am yet to face down Ravager (I noticed my Barrowholm reputation is still only “Honored”, so need to work on that

), but I am hopeful he will be able to beat him.

Thanks for reading,
ElP.

Nice! I see Phantasmal Blades and I smash the like button… used to hate the skill and now it’s one of my favs

I’m also building a PB Witch Hunter, he’s still leveling. He was going to be bog-standard vitality PB, but I’m actually going to go cold damage. I’m skeptical about vitality damage in a build with RR from only one class, especially since monsters have greater vit resistance. Cold makes sense for the dual RR. It’ll be interesting to see how he compares to my pierce variation.

Can be tough to get the RR for WH but rings with RR procs help. I’ve got an Acid/Vit PB WH and it does pretty well - just under 1mil max DPS per Grim Internals (depends on monsters)

What sort of sheet DPS are you registering?

Not sure. I’ll have to check next week for you when I back with my pc

I’m not sure why but this happens when I use Frenetic Throw with Jarinthor’s Head equipped. 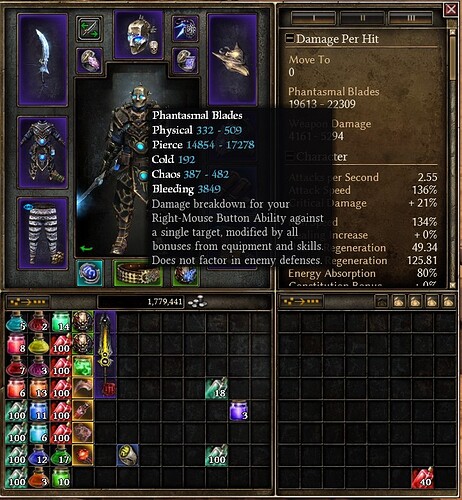 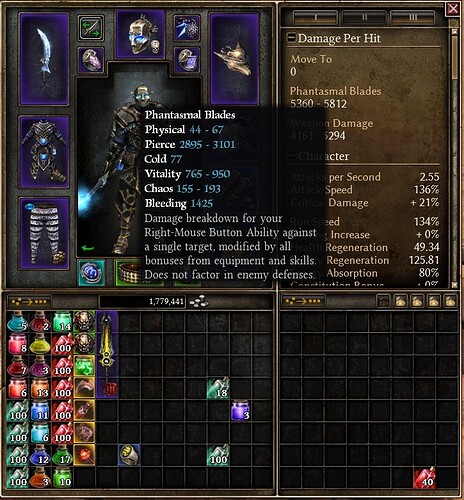 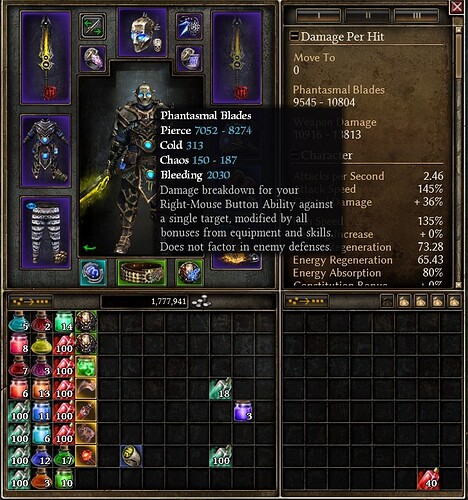 Can you show me your damage breakdown for PB?

You’ll get much higher pierce damage w/o Frentic Throw, because that skill converts all the pierce damage of the base skill to vitality.

I spotted the Spite sword after I’d sketched out my own setup, and it is admittedly, probably better, since you don’t have to take Frentic Throw. I decided to stick with the 1H/off-hand setup though, as I like it stylistically, and you get better cooldown reduction, as well as 2x component slots.

Perhaps Jarinthor’s head could get a little buff so that it can compete more with this sword… adding a chunk % of hand damage to PB on this would go a long way.

Perhaps Jarinthor’s head could get a little buff

It’s an off-hand with cooldown reduction so it’s intended for cooldown PB builds.
Pierce/bleeding build with Bloodborer should work nicely with this off-hand.