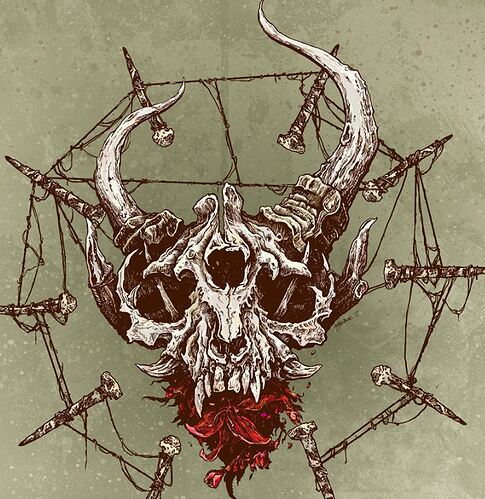 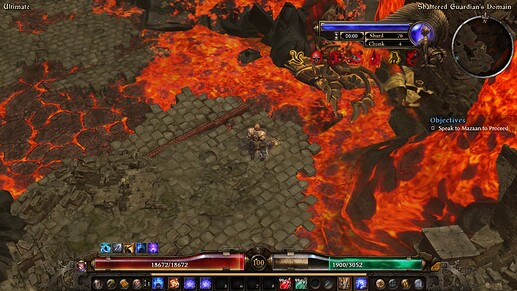 I’ll keep this short. I initially had much higher expectations for this build, but after playing it in SR a fair amount (no videos, sorry), I was rather disappointed in the damage output. Single target is meh, and AoE is only slightly better. At least it’s fairly sturdy, what with 18k health, 30% phys res, and 35% ADTCH. SR performance is reliable, if boring. Watch out for Kaisan and Fabius, they can be real bitches. Thanks to all our damage against Chthonics, Benny and Grava are pushovers. I didn’t bother trying any Celestials, I’m sure Moggy and Ravager of Flesh could be doable with adjustments.

Gear is fairly straightforward, I tried to stack as much flat pierce while maxxing Deadly Momentum, hence the gloves and medal. Judicator rings fit well here, giving nice damage reduction and flat rr. Proc is nice in shards as well. Belt is for at least some ele>pierce conversion, and flat pierce.

In conclusion, I’m glad this build is at least ok. It was actually my first build that I planned and built all myself, so at least there’s that. And it’s fun to just murder Chthonics. I wish Goredrinker set supported Cadence and Soldier side better (maybe something like %wd to Zolhan’s - could be neat), only having 20/26 Cadence is pretty sad tbh. And why the fire>pierce and not ele>pierce instead? Anyhow, thanks for reading!

Edit: finally got the GT up lmao.

Reserved. For what, I don’t know. But all the cool kids are doing it.

Build looks good on paper, and it’s ok tbh. It’s just that I feel damage is kinda lacklustre, maybe I got spoiled for 2h ranged by playing @eardianm’s Evoker Vindi.

doesn’t use silverbolt component for even more demon damdaz :sadge:

I thought this build looked familiar to me - I theorycrafted one very much like it back in February, but with Piercing/Bleeding Dual Damage since that’s my thing. Pretty similar, but I did get Cadence to 26/22/22 with using some different items. 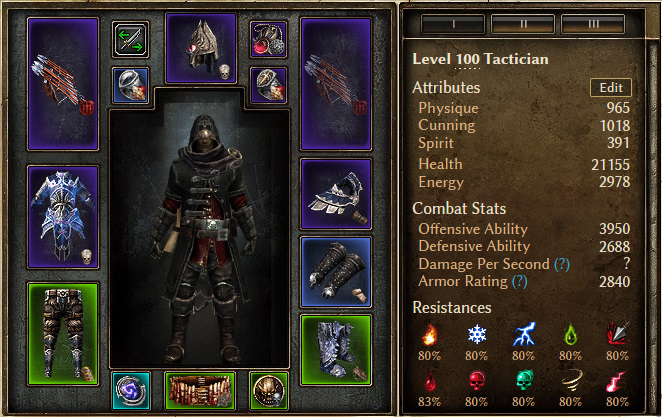 Lol there’s even ring augments that give %racial dmg to Chthonics, I believe the Black Legion sells them. But they do poison.

I contemplated going hybrid, but honestly that has no appeal to me, so I tried to go all in on pierce. I wonder what infiltrator looks like, could run Beronath for AA and use Bladetwister and pack of Treacherous Means belt for conversion. NB would bring a lot of goodies to the table, most valuable of which would be passive rr. And it would free up a ton of skill pts, so we could max Inquisitor WPS.

yo i never understood why people don’t 12/12 buffs like fighting spirit or deadly aim. is there esomething i’m missing? i can understand why if its a really point hungry build but a lot of times thats not the case.

It’s because both skill cooldown start after the effect wears off, so a 5s Deadly Aim cd works like a 10s cd on active buff skill that last only 5s. The main reason for taking DA is usually for its %OA, that’s why most builds only pick it as 1 pointer. Fighting Spirit I personally try to put it at 6/12, on some builds I even put it at 12/12 for 200% damage and 200 flat OA, it works on hit so much easier to activate compared to Deadly Aim on below 2900 OA build.

I max Fighting Spirit too. Deadly Aim I usually don’t have enough points for and you get enough from + to All / Inq usually I’d say.

I updated the GT with maxxed Fighting Spirit. I also dropped Markovian’s Advantage, bc with it, our WPS was over 100%.

Somehow, for a set that supports Cadence - the difference between an end-game build and a budget / MI build is relatively low (this is not a comment against your build, more a comment about the goredrinker set) :dunno: - Tactician, Level 100 (GD 1.1.9.6) - Grim Dawn Build Calculator

However, you might think about and invest one additional point in Storm Spread - just to get the fourth projectile

I think I’d test hybridizing with Bleed further to make better use of the set’s unique features: 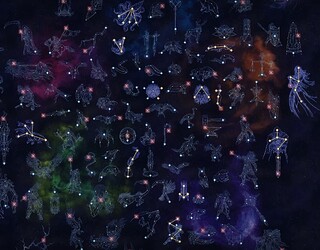 Fortunately @Foehammer build uses Judicator’s and has enough good proccers to allows for such a devotion.

uhh no, it doesn’t work like that. are we playing different games? cd for all skills including devotions starts the moment you use them. i’ve actually heard this opinion voiced before, and scrounging around the forums i heard something else, that % cd reduction doesn’t work on devotions which is also wrong. all of this is easily testable. 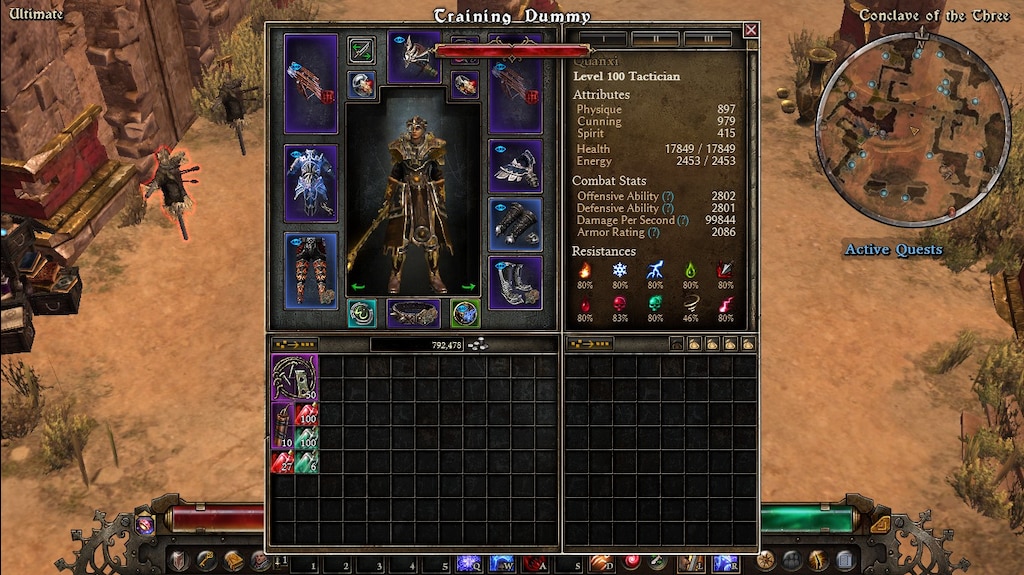 When Deadly Aim active, OA is raised to 3240, the black overlay on DA icon in bottom left means how many active durations it have left. 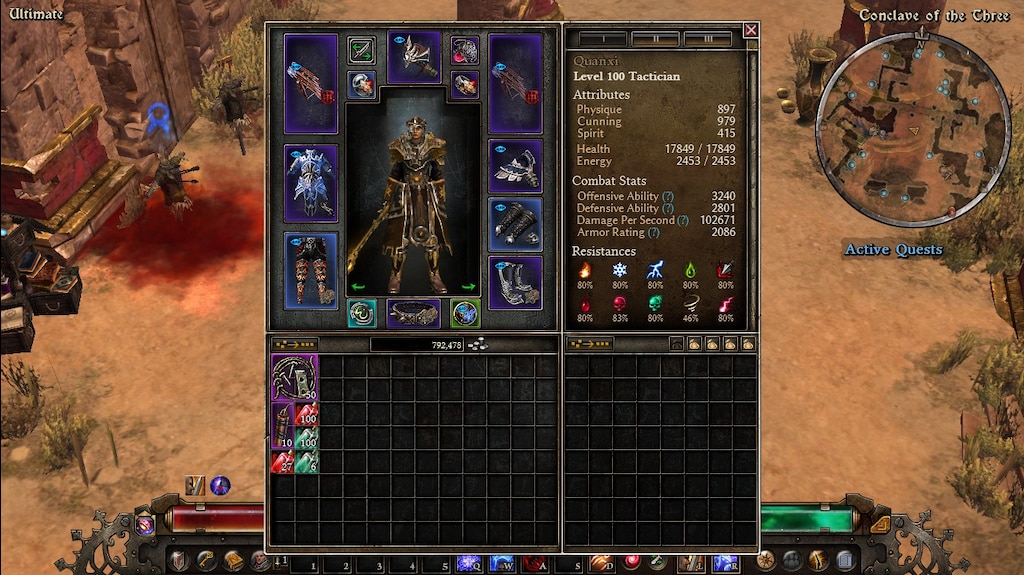 When the durations end, the 5s cooldown of Deadly Aims start. The bottom left icon is now having red overlay, meaning DA is inactive and how long before it’s available again, at this moment my OA return to 2802. 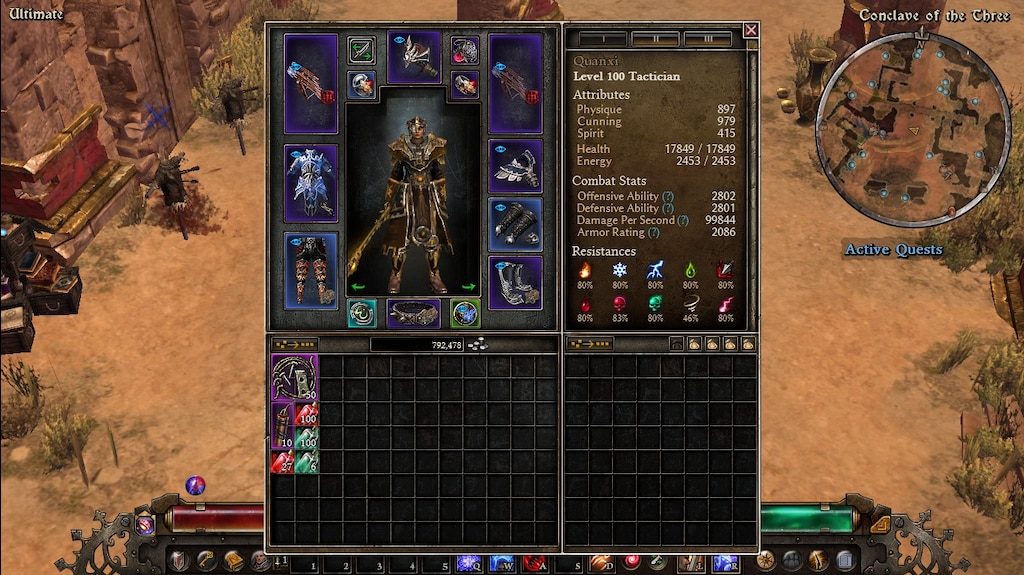 That’s why skills like Deadly Aim is like having an active buff skill with 5s effect and 10s cooldown. Fighting Spirit, Menhir’s Will, Blast Shield, Resilience, and devotion like Chariot and Behemoth works the same, their cooldown can also be reduced by %CDR but the cooldown start after the effect wear off.

“on criteria” procs buffs like fighting spirit and deadly aim, blast shield, resilience etc get their cooldown started after the buff ends, not when it happens like regular buffs, because they are not regular buffs
yes it’s easily tested, and is known already, because that’s how they work
you can even see it happen as the game gives you a little separate cooldown icon for when they go on cooldown, after the buff expires 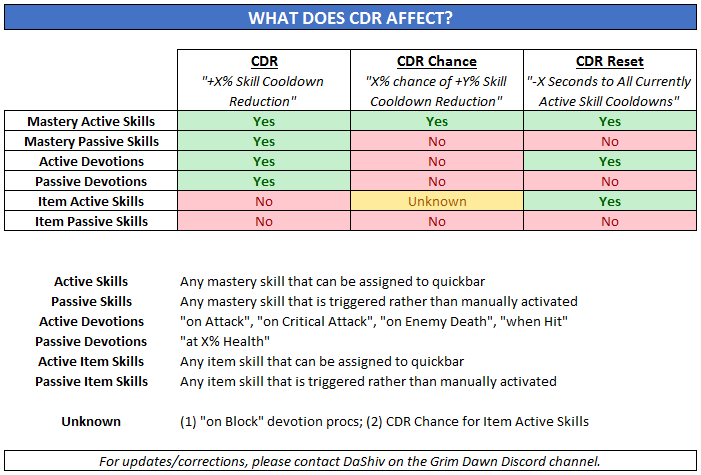 ah what the hell. i thought the cooldown timer was the buff activating again, and like an idiot i never checked my stat window. i’ve never seen a game have a cooldown timer for buffs, so thats handy i guess. thanks.