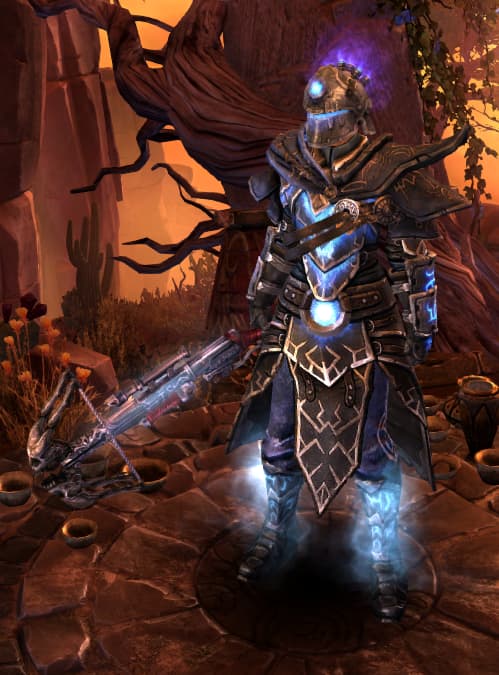 It was one of those days where it was time to try something wild and whacky. I wanted to see what I could build with that Conduit of Eldritch Whispers, the with the rapid fire Cold Doom Bolt modifier. And this is what I came up with!

Using 3pc Harbinger set for 240% weapon damage to Doom Bolt was great and all, but that also meant three (or four if you include the second weapon slot) gear pieces were NOT going toward the preferred damage type. Is it feasable to use this gear set to boost Doom Bolt rank and stats, and also to get enough cold damage to make it worth while?

So, here is the build. It deals consistently decent ranged damage, and there are some sneaky things going on that I didn’t expect, that help the damage output.

When you use doom bolt like this, on your left mouse button, it fires doom bolt which goes on cooldown for about 0.38s, and then because Doom Bolt is on cooldown, it then fires a normal projectile as well, almost simultaneously. So, the target gets hit by the Doom Bolt, and then by the crossbow bolt. Nice. The normal bolt doesn’t have great conversion to cold damage, but it still has a solid ~21k mixed-type weapon damage, which ends up hitting for an extra 21-30k on top of the doom bolt’s damage. It’s quite nice, really.

With the -50% Total Damage modifier to Doom Bolt, the crits get to around 150-230k damage depending on buffs and debuffs, and they crit quite often. While the damage output of this build is not exceptional, you can see that it really is quite comfortable, and it’s nice being able to doom bolt over obstacles or over nearby enemies - if you wanted to target an enemy in the back, like a healer for example, you don’t have to shoot through all of the enemies to get to the healer, you just doom bolt the healer. Nice.

As you can see, Sr 75 is quite comfortable. So much so, that I did the first couple of nemesis without any of my permanent buffs on by mistake, lol. But the fact that it was still quiet comfy WITHOUT the extra damage, RR, damage absorption and resistances says something, lol…

In the boss room, I do die because I get lazy/cocky, and don’t expect the spike damage to wipe me. But it does. You can also see that once I’m paying attention again, though, getting revenge doesn’t require breaking a sweat…

Healing from the build is generally quite good, and the build has a few nice survival features. The Harbinger gives full immunities to CC, and 100% dodge/deflect chance when triggered. 16% lifesteal on a ranged, AOE attack like Doom Bolt makes for good, constant healing. Pneumatic Burst and Blood of Dreeg make for nice additional heals when required, and Blade Barrier works beautifully as a panic button when required.

All in all, the playstyle is simple, straight forward. You shoot the thing, you dodge and heal when rquired, and panic button when required. Yay 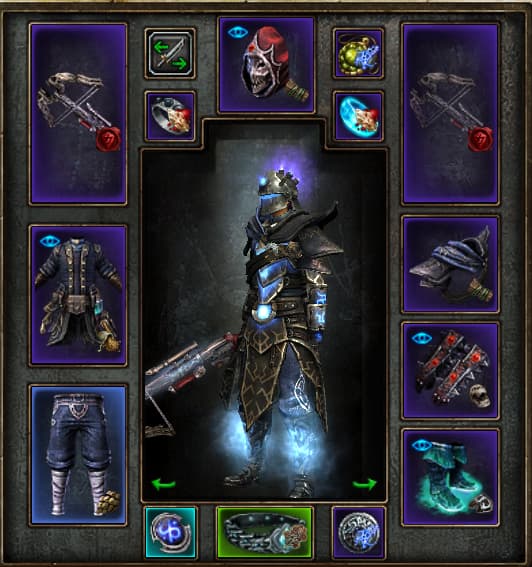 I got the build to a state that I was happy with, you’re welcome to minmax it further if you’d like.

yean np. i love that conduit its so fun.

Hey, any advice on how we should level this in first 2 difficulties, before reaching the point that we’re farming the main gear? Thanks in advance, this seems quite fun and I’m eager to give it a go, but I’m not sure about a productive levelling process, thus the question!