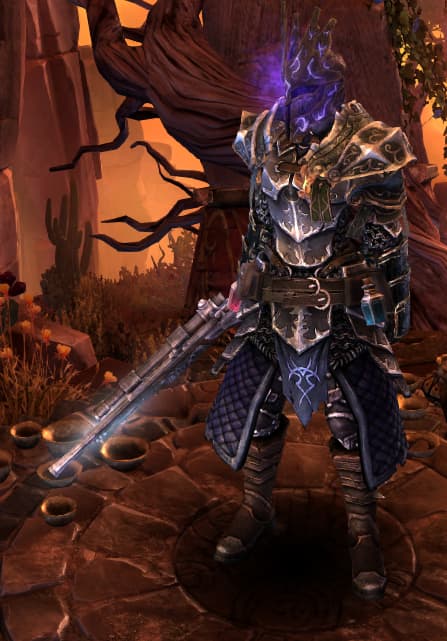 Deadeye is one of four Realm Knights designed to be playable as a solo build, or to specifically complement the Realm Knights team for deep SR. 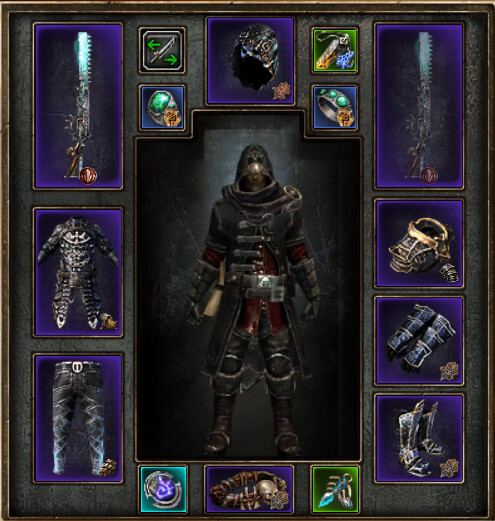 image495×521 98.5 KB
Deadeye is a high damage 2handed ranged build that brings a tonne of extra survivability to any who might find themselves lucky to be traveling alongside. Max rank Inquisitor Seals, 51% phys resistance, 17k HP, 3400 DA and 12% lifesteal on a high powered weapon all provide this character with quality of life as she blows chunks through the masses with splintering projectiles.

For some extra fun, she brings Eye of Korvaak devotion assigned to Thermite Mines, which nicely trap enemies over them in a petrified state. This is great for managing large pulls of enemies, and for keeping them debuffed by the thermite mines. This build is fun and forgiving!

In multiplayer, Deadeye provides these team-wide benefits and noteworthy debuffs:

Very clever take on the Purifier (as it’s double RR class both for aether and chaos).
I was thinking how to replace the greens (considering it may be hard to farm them), and i think
Mythical Arcane Shard of Agrivix would fit nicely (6% phys res, +1 to Demo) in the amulet slot
and
Mythical Korvaak’s Brand as medal (a ton of useful stats + bonuses to Fire Strike).
OA suffers, of course, but still.
Did not change the devotions.

Great points @AngmarDT. I could be mistaken, but I believe those stats weren’t introduced until 1.1.9.7, but these builds were originally made with 1.1.9.6.

For ease of farming, removing the greens makes sense. The medal in particular is so great for buffing Inquisitor Seal though. Even without specific prefixes and suffixes, it gives +3 to inquisitor seal, and that extra Damage Absorption is so, so important for deeper SR (which was the original intent for this build).

It becomes a bit of a toss up, then - does the team/build need more damage output with the +8% OA buff, or more physical resistance? Hmmmmm.

Depends on what the goals of the team is, I guess

Edits:
Oh I see, you’ve made some tweaks to retain the inquisitor seal 22/12, and, the 6% phys res buff doesn’t apply to the team

It’s a good place to explore for making it a better solo build, perhaps. I’d be mindful of taking out all of the reduced damage to enemies as a solo build - Perhaps consider finding skill points from elsewhere, rather than Temper…?

Inquisitor Seal is hardcapped even without greens as you see.

Point is, purple medal + amulet are guaranteed stats while greens are pure RNG and you can still use purples as replacements until you farm/find the greens you like.

I get the point of some of vitality damage converted to aether on Bat, but overall i would prefer to take Ghoul for auto attacking build.

If we drop Bat, we have two options:

I have Desolator Purifier and Ghoul really makes a difference when it is active.

Also i think at least 1 point in Blast Shield does not hurt.

Another thing: Scholar’s light let you drop Arcanum dust (as elemental resistance is capped) and since all fire damage is converted to Aether, i suppose you can drop Irrah’s Blood (12 flat aether, % aether damage + 70 da) and take Arcane Heart Powder (12 fire damage - it is converted to aether, % aether and 2% oa) - it will help with offensive ability as da is still above 3k. What do you think?

hi how to get yellow devotion 8 level. I only get 7. tnx

Hi. These four devotions give level 8. 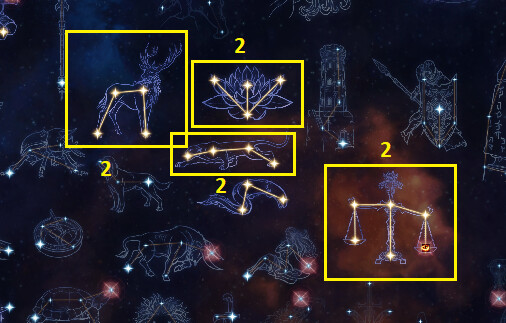 You might need to put points into another devotion like Lion first, then add Scales of Ulcama, then remove Lion afterward.

Your point of using purples until you get greens makes perfect sense.

For deep SR, which this build is ultimately intended for (and in the team it was intended to work with), I tend not to rely on short term buffs like Ghoul. A single rogue skeleton arrow can trigger Ghoul at the start of the fight, leaving the build with significantly less healing for the rest of the fight after the 5 seconds in which Ghoul is out. Vampire Fangs allows for steadier healing over time, and against some bosses, that consistency over time is a lot more valuable than the ‘boom/bust’ approach of massive lifesteal for 5 seconds, then sigifnicaintly reduced sources of healing for 25 seconds.

Your builds also have less OA and less weapon damage by about 1,500, so lifesteal will be less effective on weapon attacks.

A single point in blast shield (1/12) adds nothing of significant value for the deeper SR it was intended for. With the purple necklace, at 2/12, it’s not bad.

But then it fails to provide the beautiful 8% OA buff to the rest of the team.

So I suppose what I’m sensing is, you’re optimising your version of the build for solo play, whereas I’m confident that as it was originally posted is ultimately better for it’s intended purposes - deeper SR with a specific team, with the option of solo play.

Which is totally fine of course, take the build and do what you want with it! Build upon it, improve it, whatever. That’s the joy of sharing and discussing builds, right?

I think the fun of theorycrafting is that we can shape our characters to suit our individual playstyles.

I thought it was super cool to play with the build, I really liked it, would you guys have any to recommend me to use 2 guns 1h?