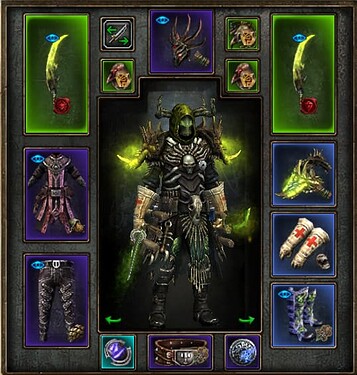 So, here’s a weird healer. As a solo build, this is quite an average build. But, I wanted to explore it as a concept to see if it could provide decent healing by using very low cooldown to Blood of Dreeg.

Why Blood of Dreeg?

Well, I wanted a wide reaching heal (20 meters) that offered a lot of HP healing (30%), because I was looking into ways to rapidly heal wide areas of allies that have high HP (think: in a multiplayer team with pet builds). One of the things I love about the Augur set bonus is that it has a 12 meter heal on a low cooldown, but the healing itself from that skill is average. So I wanted to see if we could emulate a frequent, wide area, potent heal.

Note: This build is optimised for cooldown reduction to BoD, and not necessarily %HP restored. There is a nice helmet, necklace and different swords that all boost the BoD %HP restored to a combined total of 48% if you’re looking for a single, infrequent but very potent heal. Changing to the necklace in particular will severely diminish the build’s ability to solo due to damage conversions.

With ~25% cooldown, Blood of Dreeg can be cast once every ~4.5 seconds. With the proc from the Carnage relic, that makes it about once every 3.5 seconds. With all cooldown reductions affecting Devotions, occasionally Time Dilation will proc about once every ~10 seconds, giving a full reset to Blood of Dreeg, allowing you to cast it a second time instantly. On top of that, I’ve intentionally picked out MIs that can have the Gildam Arcanum suffix, giving a 5% chance of ~70% cooldown for a skill when using it. Of course, the MI’s are optional.

On top of this, the build uses Augur gloves which have a nice short range heal ever 6 seconds. This is affected by Carnage and Time Dilation and, I presume (but haven’t tested), the Gildam Arcanum MI cooldown bonuses.

Furthermore, the build has a lowly heal pet raven. The raven has terrible resistances and low HP; this is not a pet build. However, the decent healing from Blood of Dreeg and Augur gloves, coupled with the low cooldown on summoning the raven itself (due to all of the cooldown boosting procs and stats) mean that weirdly, the pet is up 90% of the time and ready to heal you or your team as required.

This build brings two things that assist the healing further, both found in the form of Haven. Haven gives a boost to HP and a boost to Healing Effects Increase. Boost HP of course, boosts the % HP Healing capabilities. If an ally has 10,000 HP, and you heal for 30%, they get healed for 3,000 HP. If you boost their HP to 13,000, and heal them for 30%, they get healed for 3,900 HP, making the healing more effective each cast. Haven also gives allies +25% healing increase. This boosts the % heal of Blood of Dreeg from 30% to 37.5%. This means, if your ally on their own has 10,000, their HP gets boosted to 13,000, and then Blood of Dreeg heals them for 4,875 (presuming that they don’t have any other sources of % Healing Increase), which is significantly greater than the initial 3,000 hp.

Note: As you can see, this build is SLOW when soloing. It is, after all, an experiment with a focus on AOE healing… 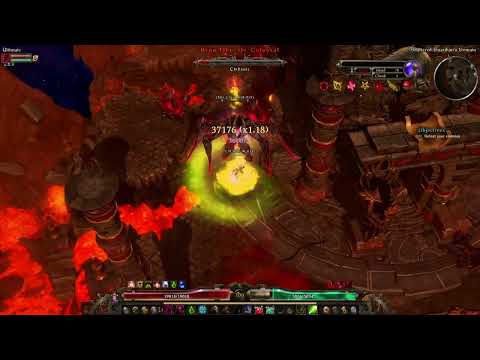 Blood of Dreeg vs Word of Renewal
I had considered Word of Renewal for this exploration as well, as it also reaches a nice, wide 20m radius. Inquisitor is always my top choice for support builds because Inquisitor Seal is just, so, damn, TASTY. But, it is harder to get it to such a low cooldown, and harder to get as high for % HP heal (even though it does give some flat HP healing as well).

Comparison to Other Heal Builds

The best straight up ‘healer’ is always going to be an Occultist/Shaman with Bysmiel’s Trinkets set and the Dark One’s set, dual-wielding Crimson Spikes with Healing Rain and Time Dilation. Both wendigo totems healing for 17% + 1950 every second, and both ravens healing for 15% + 685 per second is just insane. (This is about 64% + 3300 HP every second if all of them are happening).

Healing abilities of the draft build

But there are pros and cons to these forms of healing:

Both Ravens and Wendigo Totems are fantastic healing skills, but have their own limitations.

Similarly, this Blood of Dreeg healer is interesting, because - it has a great, wide-reaching heal that can heal everyone in the area for a decent amount, and provide some great regen to them and other buffs. But, it can’t do so very often.

Anyway, I hope you enjoy this quirky exploration into heal builds

After writing the above post, I had an idea for a low cooldown Word of Renewal healer. I counted 23 casts of Word of Renewal within a minute, giving it an average cooldown of 2.6 seconds during that time. 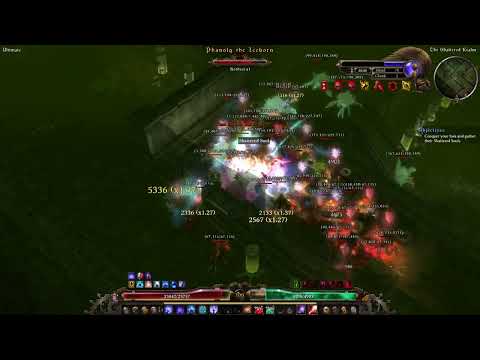 This one’s success lies in it’s 47% cooldown reduction. This coupled with Eternity gives Time Dilation a ~4-5 second cooldown, so all of the skills are able to reset very often. Kinda fun tbh

I never expected to try a healer like this!

This Word of Renewal build then has greater healing output than the Blood of Dreeg healer for low HP allies, and is able to be cast more often in this build :O. At some point, the higher BoD % HP heal will become more valuable as allies get more and more HP (looking at you, jacked up Briarthorns)… but very interesting to note.