This is a high poison retaliation damage build with very wide, ret-damage-dealing and healing Grasping Vines. This build is a lot of fun to play for clearing wide amounts of trash at a time. It has very high retaliation damage added to Righteous Fervor, and totals at ~250,000 ret damage (before resistance reduction or crits). It’s not the highest ret damage or the tankiest ret damage build, but being able to cast multiple wide-reaching Grasping Vinesmakes clearing SR fast and comfortable.

Here’s a vid of SR 75. There is an ‘overconfidence death’ involved, but as you can see, the death early on really didn’t slow down the build very much going forward. 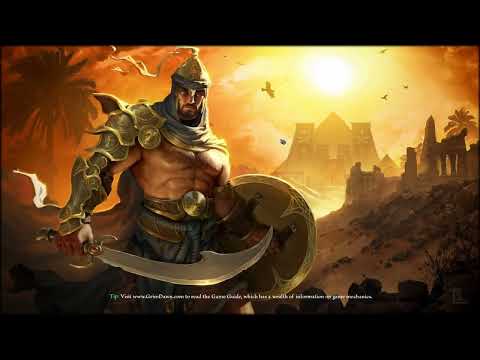 This build does lack some healing sources, and lacks damage reduction to enemies, but a lot of slow/immobility to enemies with 150-230k lingering dot damage per second allows for a nice hit and run playstyle if it’s needed. 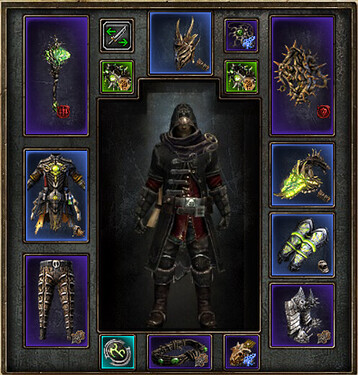 The build’s OA is low, which is helped by a 198 reduced DA debuff to enemies. Otherwise, Shattering Smash and Twin Fangs, combined with the life leeching, wide-reaching grasping vines does very well to keep Ivy’s HP nicely topped up.

another thing to keep in mind is that dot rata doesn’t stack (which is kinda bummer), so you want “a” rata source that’s super high, having multiple avg rata skills doesn’t increase your dots, it only benefits flat retal rata

Good thoughts!
But I did want the higher ret damage on Righteous Fervor and the stoneguard set bonuses.

That is a shame regarding ret dot sources… The build still feels fun and powerful enough, but good to know there’s room for improvement.

I’m curious to why you went Primal bond instead of Path of Three… I assume that you found the damage absorb important and the extra bonuses from Po3 less potent?

There is a lot of overlap in Po3, but extra % acid adds some damage and the CD is helpful, especially with the devotions.

I’m thinking that another 200% normal adds ~15% more normal poison/converted trauma and more normal/converted flat . Also, this source of dot stacks with the highest Rta dot if - dots matter to the play style?

Correct, I found having some % damage absorption in a build like this goes a long way toward the comfort of the playstyle. The cooldown reduction from Pot3 is nice, but beyond that, the build deals little acid damage and relies mostly on acid retaliation damage, and the Daega’s set provides a full 100% fire to acid conversion. Righteous Fervor also has 100% physical to acid conversions, which apply to the retaliation damages applied as well.

Dots do matter to the playstyle. Even if in this case it picks the single largest form of the dot, having some kind of decent dot damage ticking away every second even after you’ve disengaged from the fight allows for hit and run playstyles. More than half of the retaliation damage is not dot damage (about ~140k without RR or crits), so stacking things like grasping vines still has a decent effect, with the dot helping to clean up enemies after they’ve stopped taking direct hits.

Ah, I can see that preference.

Why twin fangs devotion here? You have little vitality and no piercing damage (and little converted weapon dmg = basically trivial healing from twin)…and you already get adcth from GV. Would not Rat and another %rtal node in messenger…be more helpful to increase retal dmg a bit more?

I respect your effort, but 9 mins for just sr 75 one single shade is unbearably slow, let alone a death.
Besides, trust me, if you abandon those poison retaliation and take like 80k acid retal just as Daega’s Oath is triggered in your build, the speed would be almost the same.

DoT retal, including but not limited to, poison, burn and elec, are now just some paper tiger.

I created this build, like most of my builds, for my own interest in exploring unconventional builds. The death was left in there for honesty; this video clip was my first and only attempt at SR with that build so far.

You’re right, there are more powerful, more conventional retaliation builds. But I like exploring outside of the box and trying new things.

That said, I do still like DoT damage generally - with retal or no. Even in the clip above you can see that at times when I’m dodging, I’m still dealing a nice ~200k damage per second despite having left the fight momentarily. I think there’s merit in exploring the idea.

I don’t mean to offend. What I want to express is that DoT retal is too weak to have some true influence, and it really needs some buff.

Fair enough. I hear that. I think that dot retal works for this reason -

Enemy attacks are not always quick. If they hit you twice per second every second, then flat retal is an obvious winner. But there are many scenairos where this is not the case. So if they hit you once, they keep taking hundreds of thousands of damage every second, even after hitting you only once. I think that is their power.

In some situations, of course being hit multiple times a second is the norm, and I trust that in most cases, flat retal is the winner. But I like considering that in some circumstances, dot retal might win out

Mine is just lucky because I almost fought every chunk with nemesis near the entrance.
My video: 恐怖黎明 v1.1.9.7 电反藤蔓元素使 瘸子超人！
My build: Elementalist, Level 100 (GD 1.1.9.7) - Grim Dawn Build Calculator

But my friend’s, his one is evidently a little OP because he spent much more time looking for nemesis and he even made some mistakes in shard 75 - chunk 3. If he was as lucky as I was, I believe that would be a sub 4.
His video: 【恐怖黎明1197】凯恩最速传说！奥套贝眼领主4分10秒速刷碎境_单机游戏热门视频
His build: Warlord, Level 100 (GD 1.1.9.7) - Grim Dawn Build Calculator

Cool cool. I’m surprised you didn’t put a point into Grenado and a point into Shattering Blast for an additional 57% ret damage aoe attack every few seconds.