What’s the first thing coming to mind when combining the words Fire and Skeletons?

In the immortal words of Sirian:

Safe to say, Atma wasn’t satisfied with that result. And you know the saying. If you want to get something done, do it yourself.

So out she went from Devil’s Crossing, Picked necromancer, and got the skeleton gang going. It went as you’d have expected in pre-1.1.4 normal. Skeletons died time to time, but danger was low. Post Krieg, who I killed a few times for his mace (Don’t laugh, I needed every skeleton I could get), I rushed straight into Forgotten Gods, and I had two great reasons for that. 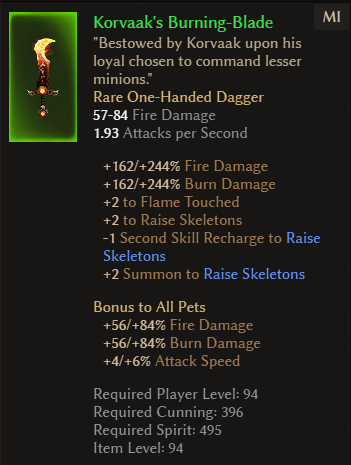 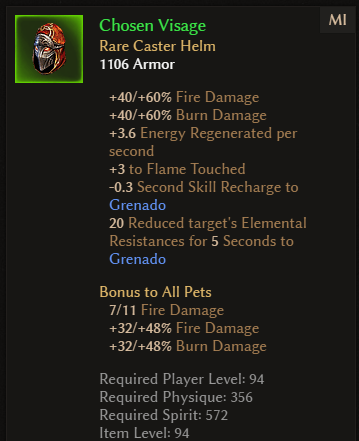 Flat and percent damage for my chosen type. That they were less useful as some epics (Wreath of Souls, and just any generic +% all pet damage item) was not entirely apparent to me, I wanted to be kitted out in defiler gear as soon as possible, and the faster resummoning from the KBB was especially tantalizing. Additionally, Compelled Wraith was a compelling off-hand pick, for the extra RR without the need to heavily invest in skills. Rolling a subjugator prefix sealed the deal for me.

FG was noticeably harder, needing Call of the Grave to keep the skeletons alive, since the death curse from wraiths could make my troops collapse every other fight (don’t laugh), but once I got that going, the casualty rate went back to manageable against the normal mobs.

Other than that, normal FG wasn’t anything special.

Until I met Papa Kymon, that is.


To be fair it was my fault, running in with less than 80% fire resists, but a few molten bacons solved it handily. Second try with a fresh army solved it for good.

Korvaak wasn’t particularly troublesome either in the first 3 phases, aside from needing to target the eldritch rifts as well, which caused a few routs.

But the fourth phase, oh god.

I knew it was my fault, it was a hot evening, and I wanted to see how far I could push the build, but still…


At least it was better than Quin69

Past that, vanilla 1.1.3.1 campaign went as you’d expect: Cruise control. Skellies don’t die, skellies kill things fast enough for things to die quick, skellies don’t take much damage. So did malmouth, despite the extra challenge there. Ekket’Zul died in 7 seconds.

Then the fun ended almost as quickly as it began. By early elite, I had all devotion points set up, and the enemies started catching up thanks to their scaling. Faction gear helped somewhat, but skeletons started showing their problems again, and by Act V, the difficulty was up the dark souls in full swing.

Around that time I discovered how some bosses can end up not doing anything, and that ghosts can mess up their pathing. So as long as I could maintain reap spirits, they would provide my fragile troops with cover.


This was used fully against Gannar’Vakkar when I met him in Ultimate.

Sadly not even that could keep me in momentum, as both Inashkor (Bysmiel quest), and a bit later, regular korvaak’s chosen heroes halted me.

After that mess, doing the main campaign felt like a breeze, and defeating Loggy in less than five minutes felt quick.


The advent of budget gear at level 90 gave me another healthy power boost, even if it wasn’t much to write home about.

Korvaak’s Ascended still collapsed my formation when showing up in large numbers, and their summoned lightning mages could rout me in no time. Stringing them out and taking them on piecemeal was the order of the day. To bridge the gap between 90 and 94, I took the plunge into the Bastion of Chaos, which went better than expected.

But it wasn’t until I got my Stormbringer of Malmouth, that I could finally take down Timewarped+Supporter combinations of chosen, or larger packs of Korvaak Ascended

Anyone has an idea why Okaloth moved this way? 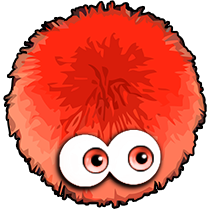 Anyone has an idea why Okaloth moved this way?
https://www.youtube.com/watch?v=26zM32ILzNw

Aye, Skeletons bug out enemy pathing. That is a common thing with big monsters. I had Grava die without getting a chance to fire off even a single skill because he got stuck in the middle of my skeleton army

It also happens with other pets, but skeletons seem to have a knack for it

That’s something I was going to test if I didn’t take so long to write the dank report.

I tried it. Tomb of the Eldritch Sun went a lot smoother than before.

@malawiglenn @Maya It is over, right?

You could try a full on drugged run. It made a difference in my fight against Crate of E on my Lost Souls Cabalist and actually made it possible.

Basically all the Udgenjuice and Royal Jelly stuff + Mog’s thingy along with Aether Clusters and WotB Tincture.

I lasted a little longer, but the instant start of the battle meant I couldn’t deal even 1/3 of his health in damage. 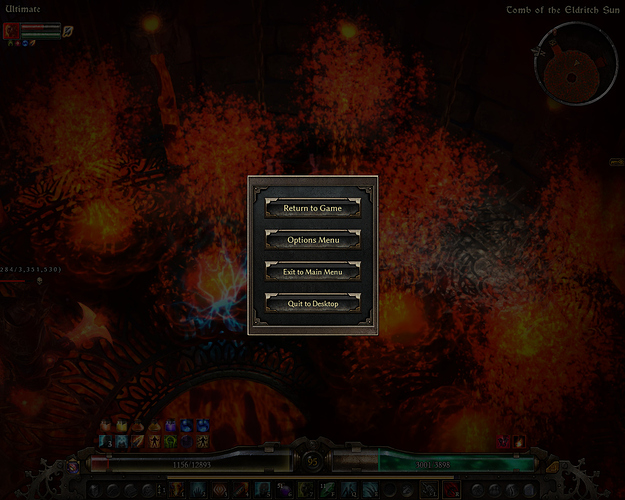 It took me 2 deaths, but I’m past Kymon.

EDIT: Wait I thought that was the video of Kymon fight. Congrats on completing the story with Skeleton Defiler. Hats off to you sir