Was just looking through my game folder this morning and realised I have a few games that are spectacularly good but are also done as a labour of love by their devs, meaning free or partly free.
I had a quick look on the forum and didn’t see anyone talking about them so figured I’d share and see if anyone else has some to add to a list. Get some good love going for them and get some games for people to play, between rage quitting after Z nerfs your fav builds and when they finally release some more pics on their new projects.

Dwarf Fortress - sure I’ve seen this mentioned before but it definitely deserves a listing, also they are currently working on a graphical update which will make it more accessible to people if that’s what you’re waiting for.

Transcendence - Good game still being developed by one guy. I’ll be honest I don’t follow this one quite as much but I had a lot of fun playing it for some time now. Basically its a top down semi-procedural sci-fi rouge-like RPG Id say. They have a couple of expansions you can buy for a couple of bucks but the main game is still free far as I’m aware.

TAGAP - Cool side scroller about penguins on drugs. absolutly a labour of love by the Devs and really good one at that. I think the 2nd and 3rd also include Co-op as well if thats your jam. They’re still working on another one (still years away I’m gussing but worth watching for I reckon.

KeeperRL - Good game, a little smaller in scope at the moment then the others above but still a bit of fun on its own. Still in development (alpha) and has a free ASCII version or a graphical and sound one which costs (a donation to a charity counts - read more on his page). I’d say its inspired by DF and Dungeon Keeper, also a rouge-like where you play as an Evil Keeper who runs around in the game and you lose if s/he dies.

Tales of Maj’Eyal (ToME) - courtesy of Powbam
…is free directly from its website. It is also available on Steam (here it costs).
Rogue-like turn based rpg

ADOM - Courtesy of Dlightfull
It’s one of the best games ever made and has a free version as well.
RPG Rouge-like.

Neverball - Courtesy Powbam
Also, I haven’t played this in a very long-time but there was a period of time I was fairly addicted to a little game called Neverball.
Think Super Monkey Ball and Marble Madness.

If anyone has more let me know and I'll try and update the OP, I'm sure there's more I don't know about and more that have been mentioned already I've missed. Kind of thinking of games that usually fly under the radar, so not massive online games that have millions of people playing F2P already. (ie Fortnight, Wrold of Tanks, DOTA etc.)

Also if you haven't tried the games above, give them a shot and enjoy :slight_smile:

PS how do you add more then 1 extra line in a post without any characters now? Cant seem to figure it out atm. EDIT Cheers Powbam

Tales of Maj’Eyal (ToME)
https://te4.org/
…is free directly from its website. It is also available on Steam (here it costs).

PS how do you add more then 1 extra line in a post without any characters now? Cant seem to figure it out atm.


looks at all that space 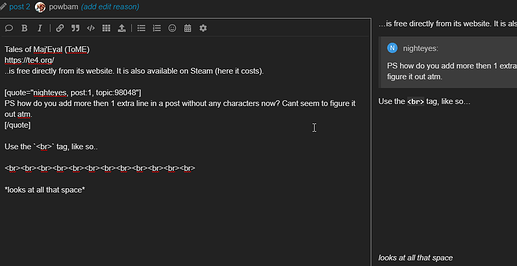 I also see you like rogue-likes. This one isn’t free but it’s a damned cool one and well worth it…

I would also recommend RogueBasin to keep up on all the many rogue-likes out there - the majority of which are free I believe.

I have been watching that one for a while to be honest, haven’t picked it up yet.
I’ll be honest rouge-likes are fun but I can only handle so much. I usually play them as little rougelike as possible

I think ADOM deserves a mention. It’s one of the best games ever made and has a free version as well.

Also, Cataclysm, while not a classic roguelike, is a very very awesome game, also deserving a mention.

We Went Back looks intriguing. I downloaded it yesterday and haven’t actually played it yet (I’ll update this post tomorrow if it’s not worth trying) but is a free horror / escape room playable in an hour it says.

When you start it has you adjust brightness, well that was too dark (YouTube video I can actually see stuff, not just blackness and lights) and the game crashed with Fatal Error when opened first door. System meets recommended specs but was choppy (perhaps due to AMD’s drivers in 2020 giving me issues) Glad it was free. Maybe with better system, and keep the brightness up, and no crashes then would’ve been decent.

Also, I haven’t played this in a very long-time but there was a period of time I was fairly addicted to a little game called Neverball.
https://neverball.org/
Think Super Monkey Ball and Marble Madness.

Thanks for the list! I’ve added Transcendance to my wish list, and am reinstalling TOME right now

Transcendence is on sale for $4.49 USD on Steam right now if folks are interested.