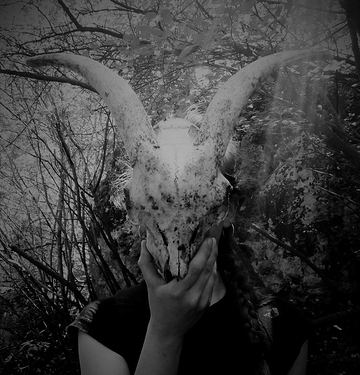 This is a non set character, so no set bonuses here. I wanted to do something with the crown of the revenant king helm and the azragor armor so I ended up with this vitality savagery setup. 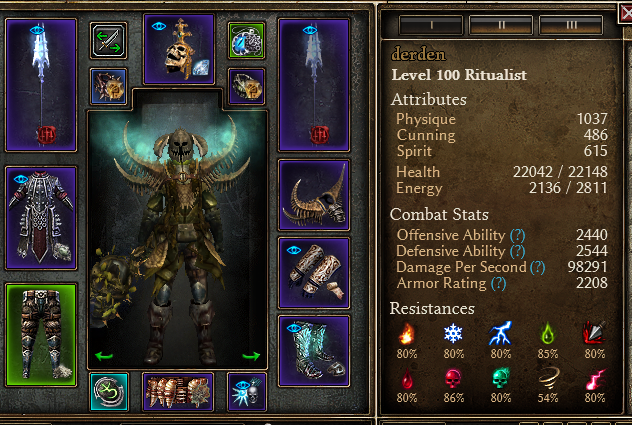 Savagery as the main damage with 100% elemental conversion from gear. Storm totem for aoe and to proc bat. Ravenous earth for damage reduction and devouring swarm for cc. Wendigo totem and mark of torment for survivability. For passives Spectral binding , mogdrogen’s pact and harbinger of souls for their valuable bonuses.azragorian tactics from the armor is also great with bonus damage, adcth and chaos resistance.

Nightbringer for weapon is a beast with all its valuable bonuses and it also gives half the elemental conversion needed. The rest comes from the revenant crown helm and the bonewraith pauldrons.
Dread armor of azragor is great with good bonuses and a nice toggle passive.Mythical heart of yugol
gives almost the exact same results with a bit more life. I chose azragor cause it sounds better to me.
cursebearer for rr and lifegiver for sustain. Rest is filled with some decent greens (pants, amulet) and some elemental gear (hands, medal).

I’m pretty happy with the results of this character especially considering that there is no set to back her up with bonuses.

Pretty sure not using soul harvest on a melee ritualist is a criminal in a dozen countries. Missing out on so much damage.

You’re right. I may change the skills setup. If I do I will post the changes and the results. The thing is if it performs good enough then i’m ok with not min maxing. I don’t care about celestials or fast clear. My only criteria for a good character is to feel good while playing and to be able to clear sr 75-76 in time consistently. There are many cases where I consciously not choose something good for my build because I saw someone use it or just because I don’t like the aesthetics or even the themes(items and skills). Not the case here,i’m just shit at building melee

I’ve started to play with this build and i am new to Grim Dawn so i have few question,

First, which path should i take until i reach level 100, should i max shaman skills and continue with necro later or open all skills and give them 1 points and max them later.

Hi @isaclya!! Happy to see new players getting into the game. Grim dawn is great and you’ll have a blast playing. So to your questions. For the first one i suggest you go lightning shaman with primal strike as your main damage. It will be easier and more smooth to level taking the lightning route. I will give you this grimtools with a suggested devotion and skill setup. https://www.grimtools.com/calc/aZqPbYMV. Your first goal is to max torrent from the primal strike line for aoe and of course put points to max the main first node too and then the third node for some electrocute. Raging tempest from the wind devil line will give you resistance reduction which is the game’s most important way to boost damage.Then get some points to the mogdrogen’s pact line. Stormcaller’s pact is also important and will boost your damage. Then storm totem for more aoe and wendigo totem for the life sustain. I also suggest you use a 2hander ( the devotions setup is constructed with a 2hander in mind, if you don’t use a 2hander then take something else instead of the kraken). Some good choices are windcaller’s decapitator, champion of the light or alvarick’s rebuke. All these are good and will carry you through the main campaign. Of course you update them with the empowered and then mythical versions once they drop. You can ignore necro till you feel comfortable with the damage you deal, then you can start putting points for the bonuses of the mastery and if you want put some points to ill omen for the damage reduction. All that till you hit level 94 when you can use all the goodies and transform the character into his final vitality form meaning full respec. As for corrupted storm it only affects the damage coming from storm totem , it’s not global conversion of your damage , it won’t affect any other lightning skill, so for the time you are lightning you don’t use the transmuter. For new players, a vitality caster, especially a conjurer or a ritualist, are way easier and more fun (at least to me) than melee, as it can be unforgiving. Ok, I hope this helps, really happy you chose one of my builds

. If this doesn’t clear things up or if you have any other question feel free to ask. Cheers! Have fun!!

Thank you for the fast response @spyrosagranitis,

I am currently 59 level and playing with 2 other friends, i gave some points to necro but i will change them regarding to your advise. I’m a glass cannon right now and i think it’ll change when change my skills.

I know that i’ll ask a lot more questions, thanks for this guide again.

Do you have capped resistances? If not then cap them as soon as you can. Also use components and augments to boost damage and defence.