Hello, I’m here to post another build that I’m fond of! Aegis of Menhir is very satisfying to use, and I wanted to give the chaos variant some love. Righteous Fervor is a very natural complement to it as both want flat damage. On top of that I always thought The Sentinel’s helm was a fun item, and I saw an opportunity to integrate it thanks to its latest skill modifiers. Devil’s Cage Hauberk is also cool, so here’s my build with some rarely seen procs: 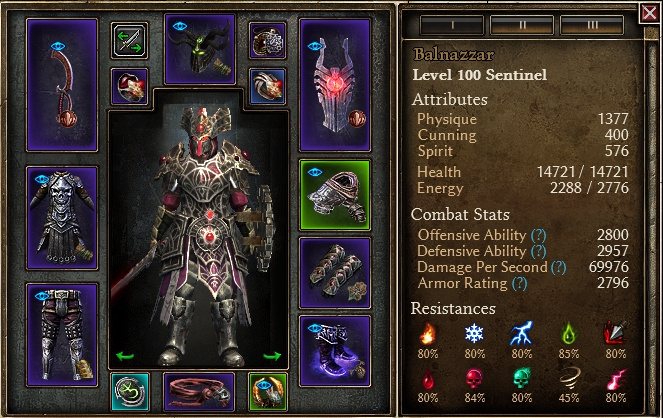 ^ the screenshot is with Blood of Dreeg and Righteous Fervor up

Performance
Shattered Realm 76 w/o Shrines or “aggro abuse” and Crucible Gladiator 170 w/o buffs and Banners has been completed: Imgur link for proof. Both can be a struggle.

Items
Main hand: Mythical Fang of Ch’thon – brutally good when it comes to 1h chaos weapons
Off hand: Voidsoul Bulwark – surely the best item in its set, this build is centered around it
Helm: Eldritch Gaze – a solid chaos damage item with shield bonuses the build can actually make use of; also provides flat OA and DA reduction that is otherwise lacking
Chest Armor: Devil’s Cage Hauberk – allows maxing AoM, and aditionally gives other very good stats: flat damage (that gets converted), HP and some DA
Shoulders: Iron Maiden’s Shoulderguard – AoM skill points again; the affixes can give whatever the build is lacking
Pants: Mythical Chausses of Barbaros – I don’t think there’s a good fit for this slot, so these pants are always a solid choice thanks to the heavy OA and proc; craftable pants (Rimeguard Chausses) can work
Gloves: Mythical Voidrend Talons – quite desirable gloves because of the base stats and Possession bonus, and of course they enable the main spammable ability of the build
Boots: Mythical Voidwalker Footpads – a chaos AoM item like the chest armor, it’s not bad overall
Belt: Mythical Sash of the Bloodlord – another thematically fitting piece of gear, it gives most of the fire to chaos conversion, and the bonus to Avenging Shield is good
Amulet: Pestilence of Dreeg – a fantastic amulet for many builds, especially for Sentinels; extra RR is always good when both masteries lack it
Ring 1: Voidheart – a staple for chaos damage; fire conversion, Possession bonus and RR are the highlights
Ring 2: Hysteria – most of the time overshadowed by Voidheart, but but here it works perfectly in adition to it: the lower conversion isn’t a problem with just above average rolls, and the flat damage and RF bonus are very nice
Medal: Basilisk Fang – AoM has its universal medal so might as well make use of it
Relic: Serenity – a second circuit breaker is a big deal, and the bonus points to Oathkeeper are huge, especially for the last point in AoM and aditional target via Avenging Shield

Augments and Components: Going for full flat chaos damage on augments definitely works well. Bloodied Crystals should be better than Runebound Topazes on a build that wants armor, despite the % shield damage blocked on the latter. Chaos Strike is used for the Rune Augment, as the build lacks % all damage reduction and that type of movement ability.

Skills
Safeguard is very nice to max because the flat damage gets converted on both AoM and RF. The Oathkeeper WPS damage gets converted along with RF, so they’re picked up to complement it. Reprisal over 12/12 seems bad as both the burn damage and RATA are mostly inconsequential. DEE is used over Doom Bolt for proccing Time Dilation because the build has no way of reducing monster damage in an AoE, so the transmuter helps. Guardians of Empyrion aren’t needed for devotion proccing.

Devotions
Aeon’s Hourglass – since the build has low CDR, the celestial power is extremely useful for keeping up Hungering Void and Ascension, along with reusing the other active skills; all the resistances on the nodes are also a great addition
Shieldmaiden – more shield stats on top of the ones that are already present make the shield a much more potent defensive tool; it also significantly increases the uptime of Void Soul, the shield’s powerful RR proc

Feedback
As mentioned before, the build is not consistent enough offensively and defensively (part of this comes from Reprisal being an inefficient investment), so I’ll list additions that would help:

Mythical Fang of Ch’thon is perhaps too good at blowing everything out of the water when it comes to chaos attack speed weapons.
Devil’s Cage Hauberk’s proc is already gimmicky, I don’t think there’s a need for the fire resistance on it to be that excessive.
The Smite modifier on Mythical Voidsteel Gauntlets feels pointless when Mythical Voidrend Talons exist.

Acknowledgements
Special thanks to @RektbyProtoss for some feedback on the build before I posted it!

Thanks, yeah, the full VS set is questionable for Aegis.
That should be better, I’ll try it out!