Sorry if this has been asked before, couldn’t find a good answer yet. I brought my SR to 75 today and am ready to grind the sh*t out of it, since I’ve seen many green MIs drop there I was wondering if Alkamos’ legendary rings are able to drop there as well? If so I could safe myself the endless SoT grind…

I’ve search Discord for this today (it’s actually best if you want to search for some info) and people said at least 2 times you actually can get the blue Alkamos rings from SR. But no confirmation of purple rings dropping.

get the blue Alkamos rings from SR

I have the blue alkamos set, both of them droped in SR, in 45-55 something. But for the legendariers I don’t think so.

Purple alk rings are only dropped in SoT. So it was, so ever it shall be written.

Or just simply no one has dropped them in SR yet?

i can confirm that Mad Queen’s Claw can be droped in Crucible/ SR reward. For some reason a Legendary MI still be droped like that, so i;m not sure about Alkamos rings

That’s interesting thread, there is popular opinion that purple MI drop only in campaign but some people are reporting getting items like Outcast Secret or Decree of Aldritch in Crucible or SR. Is there loot connection with bosses that were killed in these modes before opening loot chest? As example if you always meet Anasteria (5% chance to drop her helmet?) in 169 cr wave then there is some chance to drop this helmet from chest but if you go waves where she does not spawn then you have no chance to get it? If it works that way then Alkamos should have chance to drop his rings in SR but it’s very low because he does not always spawn and he has 99% chance to not drop any of his rings.

I had 2 Madqueen claws from SR but I don’t remember if I killed her before or what MIs can be dropped and what not.

MQC, decree have dropped in crucible since vanilla and he drop pattern holds through SR. Similarly alk rings never dropped purple in crucible and there have been no reports of them dropping in SR. I would not be the least bit surprised to see SR’s loot pool being CR+ runes

I have 5 Decree of Aldritch, all from Crucible or SR. I have never had a purple Alkamos ring drop outside of the Steps.

As example if you always meet Anasteria

In my short experience in SR, I don’t think that killing those bosses or nemesises affect the loot. I never saw Kaisan amulet in SR but I kill him all the time and I never saw Alkamos in SR but I got the blue rings(Maybe on higher levels like 75+? I never went that far.). But I would like to have a proper explanation for it too, I might be wrong but I really see no connection between the loot and the monsters we killed. It’s all totally random to me.

That’s because Kaisan only drops it in the main campaign.

I might be wrong but I really see no connection between the loot and the monsters we killed. It’s all totally random to me.

You have to remember when you fill the soul bar to make the portal appear for the next chunk, the remaining monsters die and that counts as if you had killed them yourself. I know this because in one character that was fighting Kaisan (and that was the first time that character was fighting Kaisan), i filled the soul bar before he died and then i had him as my greatest monster killed, even though i technically didn’t killed him.

So maybe a Nemesis that dies offscreen from the soul bar being full makes his MI being able to be in the loot chests.

That’s very interesting. I never thought it like that. You’re probably right, they die too but then it means that I never saw Alkamos, not in chunk and not in boss rooms either but it was there and died because I filled the soul bar before I encountering him?

In V1.1.7.0, we are going to make a correction to the Crucible and Shattered Realm loot tables that involves the removal of base game Unique roguelike MIs from their loot tables.

This was already the case for Unique MIs from the expansion roguelike dungeons and was inconsistent.

So I guess if your hope is to farm them from the Crucible or Shattered Realm, you may want to do so quick! Although honestly they were rare from those game modes to begin with.

Alright, so @Zantai pretty much confirmed that they CAN drop in theory, but since nobody here has ever seen that happening I guess it’s so unlikely that farming SoT is still the better way to go. Thanks for the clarification!

That’s very interesting. I never thought it like that. You’re probably right, they die too but then it means that I never saw Alkamos, not in chunk and not in boss rooms either but it was there and died because I filled the soul bar before I encountering him?

Do purple named bosses even appear in normal chunks? I never found one there, they always only show up in boss chunks. I believe the only bosses can spawn in the normal chunks are Nemeses.

There is Alkamir, the shattered version of Alkamos. So maybe that one can also count towards dropping Alkamos purple items.

Then I guess we found the answer, he is counted as Alkamos and can drop blue Alkamos rings probably with a very low chance if you kill him.

And Devs (or maybe God of RNG?) heard my voice and showed me the real Alkamos in SR… 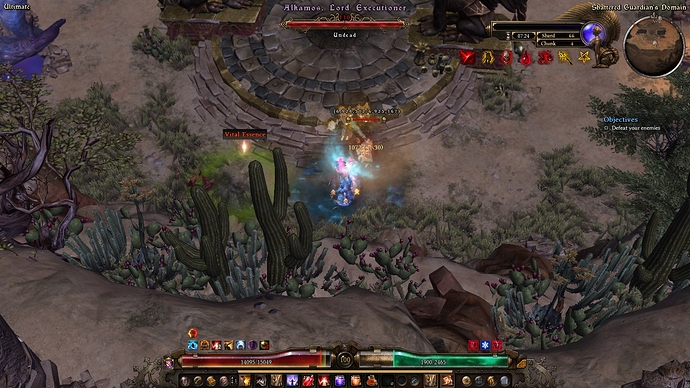